Last week I was struck by a photo I spotted on Facebook: three graduates of our 2008 Master/Postgraduate Diploma in Contemporary Diplomacy happened to meet up in New York. Coming from Suriname, Kosovo, and Samoa, this was the first time their paths had crossed since they met at the introductory workshop for the Master’s programme in Malta. 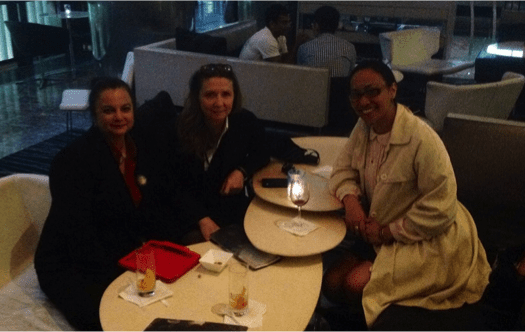 Several other members of the 2008 class noticed the posting on Facebook, too, and shared comments. I hadn’t realised how closely the class had stayed in touch over the years. These three were lucky enough to catch up in person. I invited them to tell our community what they have been doing over the last six years.

Angelic Alihusain-del Castilho was the ambassador of Suriname in Indonesia while studying with Diplo. Following her posting in Indonesia, she returned home and since then has served as Senior Policy Advisor at her MFA. In this capacity she has co-organised basic training for diplomats, prepared the first draft for a law on the Foreign Service, and prepared guidelines/procedures for it, too. In 2011, she published her Master’s dissertation research on The Positive Branding of Islam. Angelic also attended Diplo’s Internet Governance Capacity Building Programme, and through this became active in the Internet Governance Forum Multistakeholder Advisory Group. She was invited to New York by the United Nations Foundation to deliver the keynote address at the opening event of the Global Classrooms International Model UN, and to speak at the Committee on Women in Governance and Politics.

Arijeta Shporta was working as a special assistant for the civil administration, UN Mission in Kosovo when she attended the Master/Postgraduate Diploma in Contemporary Diplomacy. Following her work with the UN mission in Kosovo, she was posted with the UN Mission in Afghanistan from 2009 to 2010. In April 2010, she moved to a new post in Darfur. She is currently in New York at the UN headquarters for three months’ temporary duty with Rule of Law.

Francella Strickland was a Foreign Service Officer for the Samoa Ministry of Foreign Affairs and Trade when she started studies with Diplo. Since then she has been promoted twice and is currently serving as Counsellor and Deputy Head of Mission to Samoa’s mission to the United Nations. She is involved in representing Samoa in the negotiations on the Post-2015 Development Agenda and the 3rd International Conference on SIDS to be hosted by Samoa in September this year. Together with all these professional duties, she also makes time to spend with her two young children.

Francella wrote to me:

One of the beauties of the course with Diplo is the long term-friendships we found during that time in Malta. We may not communicate daily, but we share some fond memories. The course played a part in my confidence and understanding of diplomacy, not only from the course lecturers and organisers but from the other students themselves. The subjects studied and the training contributed significantly in my daily work in the Political International Relations and Protocol Division while in Samoa and now here in New York.

All of us at Diplo are very proud of the accomplishments of our alumni members: congratulations to Angelic, Arijeta, and Francella for the important work they are doing.

We’d love to hear what other members of the Master/PGD 2008 course have been doing in the last six years – please share your updates by adding comments below.

If you took part in another Master/PGD year, please help us to write a blog about your group (contact hslavik@diplomacy.edu).

What is the European Court of Justice telling us in the Google case?Webinar digest: Does diplomatic law really protect?
Scroll to top