Diplo lecturer Alan Franklin‘s webinar on 20 May stimulated intensive discussion about whether diplomatic law actually is complied with (the conventional viewpoint) or whether it is ‘honoured in the breach’ (the more realistic viewpoint).

The main topics of discussion were:

In this follow-up blog post, Alan discusses the first topic in more detail. He will cover the other topics in separate, but inter-related, posts.

The USA seems to be the party most relevant to this dispute. It has signed the Optional Protocol of the VCDR, which allows state parties to bring this type of matter to the International Court of Justice.

Why is nothing being done by other states? Is it becuase:

Some typical reactions in the USA:

In April 2007 the Estonian Mission in Moscow was the subject of a siege and blockade by Russian youth; this action was tolerated by the Russian government. (For details, see René Värk’s article The Siege of the Estonian Embassy in Moscow: Protection of a Diplomatic Mission and Its Staff in the Receiving State.) Russia’s failure to react was criticised by the USA, the EU and NATO as contrary to the VCDR.

There have been other recent breaches of the VCDR:

At the same time, we have to ask whether inviolability of the diplomatic bag is intended to allow diplomats to put people, drugs, or bombs in such bags? Where is the balance between inviolability, and the obligation of those filling the bag not to abuse that power?

As Gergo Pasqualetti points out in his article Carry on Excellencies (Miskolc Journal of International Law, 2012, Vol. 9, No. 1, pp. 43-53), the diplomatic bag has been used to transport people and drugs, among other articles. Was this article of the VCDR conceived to allow transport of private and confidential communications and documents between diplomats and their sending states, or to allow any matter to be transported without detection? I highly recommend reading this article to obtain a strong grasp of the issues related to the diplomatic bag.

Note that Art. 35 of the VCCR states that the consular bag is inviolable, provided that it shall only contain official correspondence or articles intended for official use (not people or drugs). The VCCR also provides for ‘search or return:’ the bag may be inspected if there is suspicion that its contents are not in accordance with Article 31 in the presence of a consular officer, or if the consular officer refuses to attend, the bag may be returned to the sender.

The VCDR has no such provision for ‘search or return.’ Art. 27, paragraphs 3 and 4, provide for inviolability of the diplomatic bag, which shall contain only documents or articles intended for official use.

Repercussions of these ongoing breaches:

Should the Conventions be amended to delete this protection of information, since it is being breached regularly anyhow? If this is not done, then continuous breaches will detract from the prestige of international law in general, and the strength of these Conventions in particular: if breaches of one aspect of immunity are tolerated, then why would other breaches not be equally tolerated?

Below you can view the presentation used for this webinar and also watch the full recording of the webinar.

Looking forward to seeing you at future events! 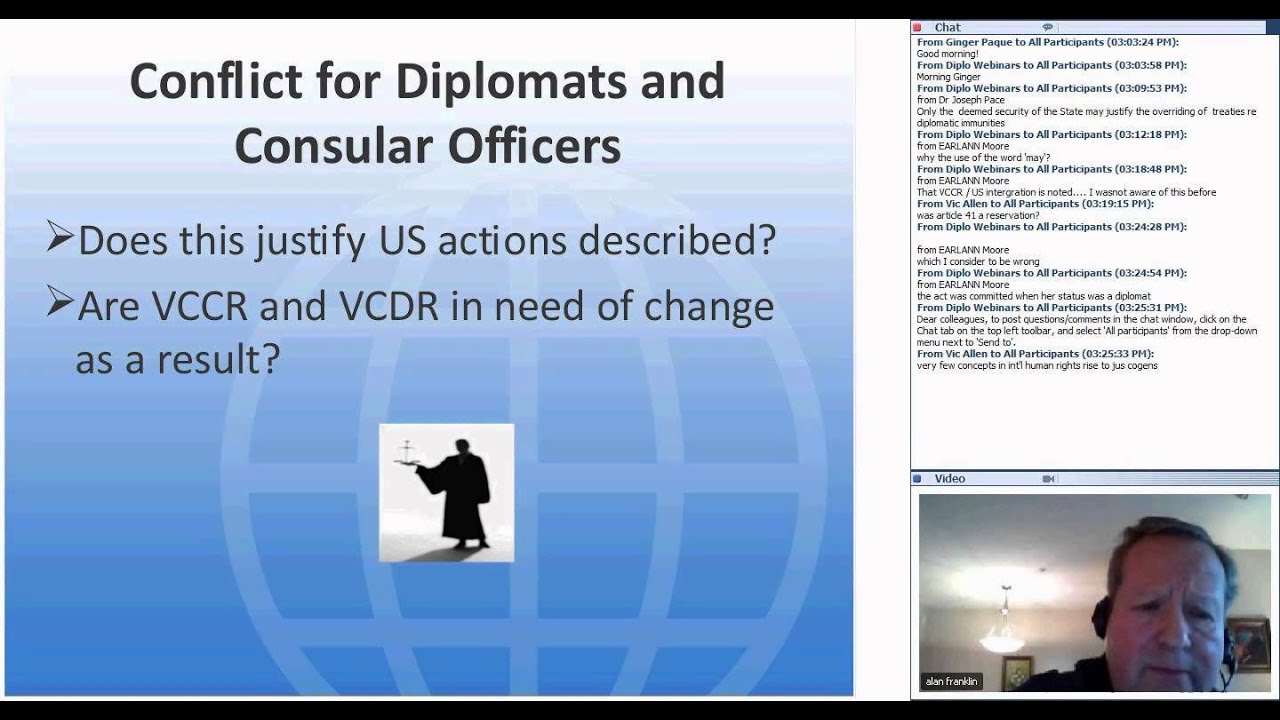