You are here: Home1 / Persuading and resisting persuasion

Dr Alex Sceberras Trigona stresses that not only persuasion but also resisting persuasion is highly important for small states, which tend to be seen as the ‘diplomatic prey’ of great powers. He analyses three examples of successful persuasion from Maltese diplomatic history. First were the negotiations on Maltese neutrality, which required a lot of persuasion of two major Cold War powers and numerous regional players in the Mediterranean.
Resource type
Author
Year
File
Academic papers
Alex Sceberras Trigona
2013
Link

Diplo: Do you agree with Professor Kappeler’s view that persuasion is the essence of diplomacy?

The functions of diplomacy as defined in the Vienna Convention of 1961 are representation, protection of own citizens, negotiation, reporting, and promotion of friendly relations.  The fact that persuasion is not listed amongst them has to be seen in the context that this document is a product of the Cold War, when even reaching the least common denominator took 13 years of negotiations.

Whereas persuasion does not feature at all in reporting, representation could lead to negotiation, where the need for persuasion might arise. Protecting one’s citizens might involve lobbying, of which persuasion is an instrument.  There is an element of persuasion on a macro level in promoting friendly relations, the type one associates with marketing, advertising, and branding, but not so much on the micro one-to-one level.  Probably this is not the kind of persuasion Professor Kappeler is referring to.
It is a small fraction of diplomats who are directly involved with the diplomatic function mostly associated with persuasion, i.e. negotiation.   Even here, many agreements, such as those defining cultural, taxation, and friendship ties, are of a template nature, requiring very little persuasion, albeit they take the form of treaties, the highest expression of diplomatic relations.   Moreover, in many other negotiations, such as lobbying to elect candidates to international bodies and support for general resolutions considered harmless and not entailing giving up on anything, representation without much persuasion is employed most of the time. Interlocutors will be anyway taking decisions based on their own considerations and interests, whatever is politically more convenient and expedient to them. This lobbying is usually not so engaging.  It is characterised with taking note and referring back, persuasion light at most.

Real persuasion is more than that.  It involves a change in beliefs, attitudes, and behaviour from what they were before embarking on a negotiation strategy.  This is more rare.

Diplo: How is this reflected in your experience?

In my experience I often had to deal more with the converse.  As a small country we always have to be careful from undue pressure into being persuaded.  Actors with more resources view us as vulnerable diplomatic prey.  Resisting persuasion is an equally diplomatic function .

Diplo: As the first designated Minister of Foreign Affairs for your country [Malta], can you recall particular situations where persuasion played a key role?

Adopting neutrality from an international law concept to a fulcrum of a country’s foreign policy required profound persuasion.  More so when we were the first country deliberately opting for that path, since in the case of Austria neutrality was imposed by the victors of World War II.  To start with, this was considered by the West, of which we traditionally formed part even if never members of NATO, as a step away from it.  The East was not satisfied with this move, and it would have been easier convincing them to join their Block than becoming neutral.  The two sides, always keen on recruiting new members, were afraid of the creation of a third way, as this could serve as an alternative for sympathetic countries who were reluctant to formally join any alliance.

We were a bad example for their efforts, with groupings in France and Italy arguing against NATO membership, recommending the ‘Malta way’ instead, and allies in the Mediterranean straying away from closer integration into the Soviet sphere of influence.  Recognising a neutral status introduced a defect in the argument that only full membership can protect Finland and Sweden from the enemy.  This created a cumulative effect between the mid-1970s and 1980.

Apart from NATO and the Warsaw Pact, there were other groupings trying to persuade us to move closer to them, including the League of Arab States.  Libya and Algeria were not pleased with the consolidation of our ties with their former colonies Italy and France, and similarly the West grew suspicious with the warming up of our relations with Libya and Algeria.  Persuasion took a new meaning when beyond the rhetoric, Mintoff managed to extract 500 million MTL (€1.2 billion) from Italy to guarantee our new stance.  One cannot ignore the non-accommodating domestic dimension during all this.  Our efforts were stunted by the disagreement on the matter by the Opposition at home, depriving us from the strength to present ourselves as a united national front.

Another situation related to persuasion is our 1983–1984 membership of the United Nations Security Council; the only time Malta occupied this position in our almost 50-year history at the UN.  Starting with our nomination, we failed to persuade our grouping, the Western European and Others Group (WEOG), to endorse our candidature.  Domestic politics again played a role here, when Italy, a customary ally and a very strong influence in the group, opposed our efforts claiming that this would be meddling with the national debate on the legitimacy of our government. From our point of view, it was that position which constituted interference in domestic affairs.  We upped our stakes by declaring that unless our 18-year wait to get a WEOG nomination was vindicated, we would run independently for the General Assembly vote.  This implied that if elected we would be taking decisions independently of WEOG positions.  One has to note that at the time WEOG was tightly knit and controlled, and not unravelling as it is today.  UNGA elected us with an astonishing 111 votes from 157 members.  Once there, a relevant issue we had to deal with was the shooting down of Korean Airlines Flight 007 over Kamchatka, when we took a stance perceived as favouring the USA and against the USSR, contrary to other Western countries.

The third situation where a lot of persuasion was involved is related to the building of the national grain terminal.  During negotiations with American investors in 1984 we had to deal with World War II unexploded ordnance on the seabed in the area.  Our efforts with the British to clean the zone, as the rulers during the War, included phone conversations with the Foreign Secretary, discussions at the highest levels during the Commonwealth Heads of Government Meeting, corridor diplomacy in the shadows of other multilateral gatherings, and an audience at 10 Downing Street. The British Government was determined to stay out of it, quoting our independent status, and at a later stage bringing up its concern at creating a precedent of responsibility towards former colonies.  We embarked on a campaign to bring up the issue at several international fora, such as the Commonwealth, the Council of Europe, parliamentary assemblies, and in the media, driving the message that Britain’s abdication from responsibility was hindering our economic development.  We invited a Soviet minesweeper to enter the harbour immediately after the expiry of a deadline we gave to the UK.  That same Christmas morning, the British High Commissioner contacted us to investigate what was its purpose, and by the evening we had assurances that the British were reconsidering their position.  Eventually they agreed to our terms and the zone was cleaned.  This represents an example of persuasion as part of a larger diplomatic strategy.

Diplo: What do you consider as decisive factors in persuasion?

The Ancient Greeks distinguished between Pathos, Logos, and Ethos, corresponding to the emotional, the rational, and the principle.  This is still valid, and persuasion is a mixed bundle of the three, with the dose of each varying according to particular circumstances.  Diplomacy does not allow much room for the emotional , and convenience determines the application of the Logos.  In the previous example, the British used independence and precedent as principles, whilst we put more thrust on the rational.  The decisive factor was the fear of the UK being blamed by the USA for allowing Malta to slip further under USSR influence.

Diplo: How do you explain the failure of some diplomatic counterparts to persuade you?

At times I just resisted.  At others, they were simply not convincing.  Sometimes their demands went too far against the interests I represented.  In some instances the expectations placed on the interlocutor were too high.

Diplo: What lessons in persuasion could be drawn from your experience?

Study the facts of the case under negotiation in great detail – bluffers are not very successful in persuasion.  Know your interlocutor as thoroughly as possible – be aware of their sensitivities.

Diplo: Who were the best persuaders you have met in your career? What were their key strengths? Do historical considerations play an important role in the process?

Historical considerations certainly play a role.  The former British Prime Minister Sir Geoffrey Howe was very persuasive.  His way of diffusing tension in difficult situations was a key to this ability.

Diplo: Do you think that persuasion will change in the Internet era? Will it be easier or more difficult to persuade via the Internet?

The Internet is an additional tool in the diplomatic process.  Its intelligent use can be a part of a successful strategy.

Small Economies in the Face of Globalisation 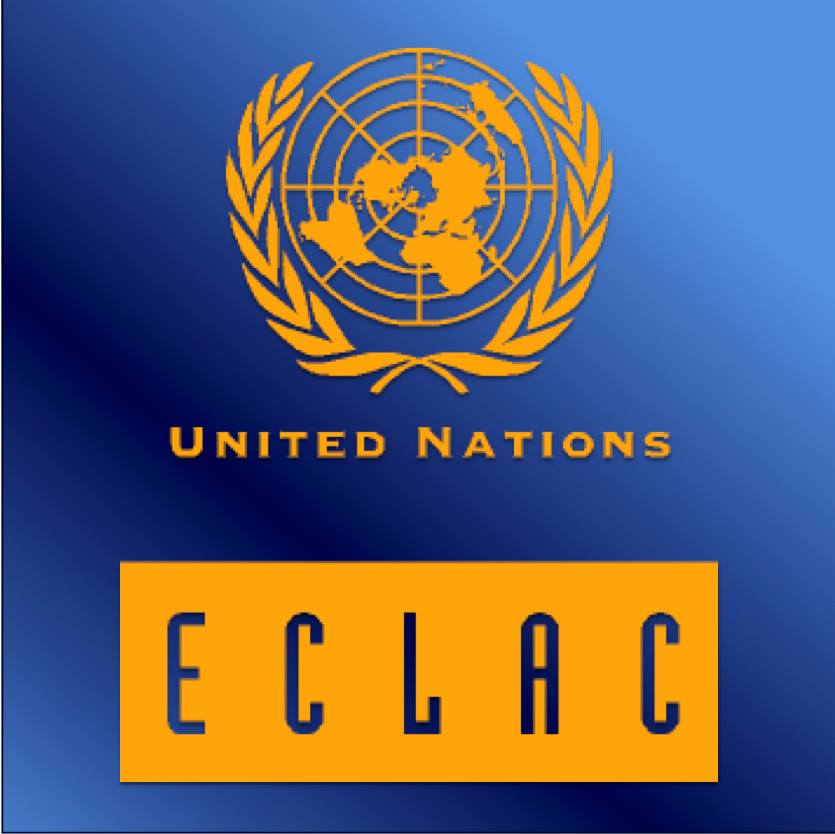 On Behalf of My Delegation,…: A Survival Guide for Developing Country Climate Negotiators

The one hundred pages of this book are in fact a useful Survival Guide for those approaching climate change negotiations for the first time. It has been written for developing country delegates, but delegates from other countries can also profit from its reading the... Read more... 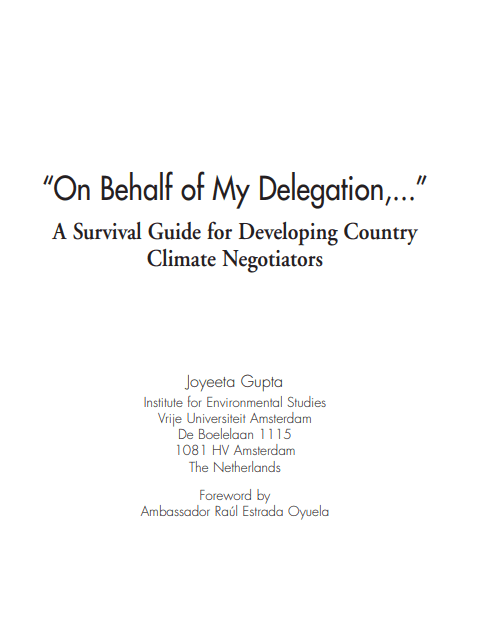 SIDS tends to perform particularly well with regards to their socio-economic achievements and development endeavours. As a result, several SIDS graduate from their Least Development Country status to Middle-Income Country status. This graduation implies that SIDS are m... Read more... 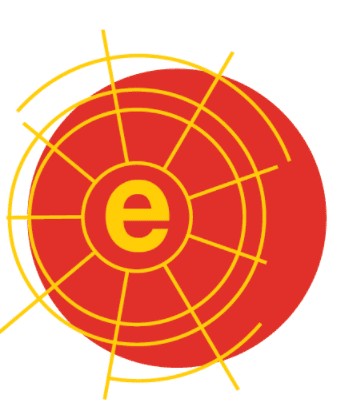 With little recourse to traditional economic and political power in their international relations, diplomacy for Caribbean states is a key mechanism to achieve the realisation of the region’s overall development agenda. The Caribbean is no stranger to diplomatic c... Read more...