You are here: Home1 / Diplo conducts e-diplomacy training in Saint Kitts and Nevis

The use of online tools together with traditional diplomatic approaches is how Saint Kitts and Nevis can ensure representation in multilateral diplomacy in Geneva and globally, Dr Jovan Kurbalija said during an e-diplomacy workshop for diplomats of the Caribbean small island state.

Dr Kurbalija, director of DiploFoundation and head of the Geneva Internet Platform, delivered the workshop via the Internet for ambassadors, consuls, and officials of Saint Kitts and Nevis as part of Diplomatic Week 2016. Dr Kurbalija opened the workshop from Diplo’s office in Geneva, Switzerland. His presentations were followed by those from colleagues Ms Virginia Paque (USA) and Mr Pete Cranston (UK).

With a population of about 50,000, Saint Kitts and Nevis is among the small island states with limited financial and human resources to participate in global diplomacy. At the same time, in today’s highly interdependent world, small island states cannot afford to be absent from negotiations that affect them directly, such as climate change.

During the e-diplomacy workshop, participants discussed the use of e-participation and social media as ways of increasing the country’s diplomatic footprint. 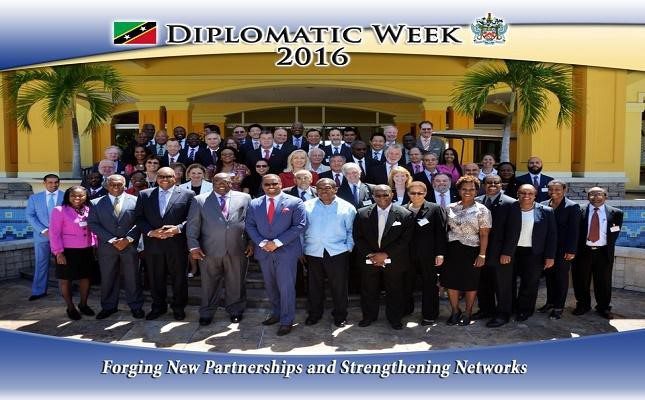 Online tools can be effective if used in combination with offline approaches, including physical presence at meetings, coordinated representation among small island states, networks of honorary consuls, the support of diplomatic interns and retired international officials (such as the Graycell project), and harnessing diaspora expertise, among others.

This smart blend of online and offline approaches is at the core of Diplo’s diplomatic toolkit for the representation of small and developing states. The toolkit aims to strengthen the participation of small island states in International Geneva; many such states do not yet have a permanent presence in Geneva. They need to be involved in addressing climate change, trade, health, migration and other issues of direct relevance for small island states.

DiploFoundation is a non-profit organisation established by the governments of Malta and Switzerland in 2002. It is often described as the ‘diplomatic academy of small island states’ because many small island states use Diplo’s online programmes to provide diplomatic training for their officials.

Diplo has received wide recognition for its work, including consultative status with the United Nations, and was ranked among the top 100 non-governmental organisations in the world in 2013. Currently, Diplo is the online host of the International Forum on Diplomatic Training.

Where are you (in the digital world)?

Graduation ceremony for participants of the GIP’s course on Internet gove...
Scroll to top