You are here: Home1 / Ten Points on Science Diplomacy

On Monday, 2nd November, I addressed the conference ‘The CERN Model, United Nations and Global Public Goods’. The underlying theme of the conference was the interplay between science (CERN) and diplomacy (UN) in the globally unique setting of International Geneva.

Before you move to the ten points summarising the notes and illustrations from my keynote address, you can put our deliberation on science and diplomacy into the historical context visualised by Holbein’s painting ‘The Ambassadors’. 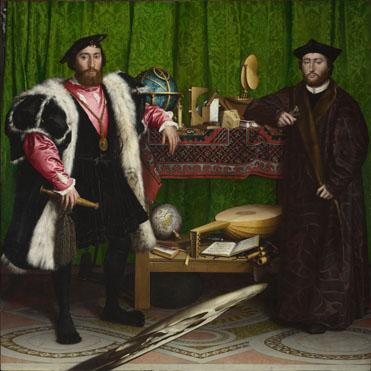 Between the two ambassadors is a display with two shelves of objects with strong symbolic meaning. The lower shelf has earthly symbols, including a globe, a merchant’s calculus book, a lute with a broken string, and a Lutheran hymnal. These items represent earthly interests, and the disorderly disputes that accompany them.

The two ambassadors should overcome these earthly conflicts and elevate society to the upper shelf that symbolizes a stable heavenly order, represented by tools of the science of astronomy, evoking the optimism of the Renaissance era. The function of diplomats is to bridge these two ‘shelves’ – the earthly and heavenly ones. Although they relied on science and the power of human creativity, the presence of a skull in the painting is a reminder that pride in human knowledge and the power it gives, can be perilously vain.

Scientific arguments are used to support policy and diplomacy in at least three main ways. First, science provides a factual basis for numerous global negotiations on topics such as disarmament, environment, food, health, energy, and population. In fact, it is difficult to find a global diplomatic process without some involvement and influence from scientists. The best known example, climate change negotiations, centres to a large extent on scientific arguments about the causes of climate change.

Second, science becomes prominent in addressing core public issues. The recent WHO report on cancer risks and consumption of red meat has moved from the research labs to restaurants, talk shows, and families worldwide. The WHO, and its report, have become part of everyday conversation, especially in countries with heavy consumption of meat. Such high interest in the report will inevitably be reflected in the work of diplomats who represent countries that have questions and concerns about the WHO report findings.

Third, science matters a lot in times of crisis when stakes are high. A few years ago, when European airports were closed due to ash clouds from Iceland’s Eyjafjallajökull volcano, science was at the centre of the surrounding heated debate. Peter Hartman (CEO of KLM) questioned how ‘scientific’ science is: ‘We want several routes to be opened again so we don’t paralyse the whole of western Europe. What is going on now is not based on any scientific criteria. We have been constantly asking meteorologists to give us some criteria. Tell us why you did this and where have you measured it’. (Source)

In a debate with scientists, the director of the International Air Transport Association (IATA) said: ‘we did not focus on figures and facts. Europe was using a theoretical mathematical approach. That is not what we need. We needed some tests. We needed some test flights to go in the atmosphere, assess the level of ashes and take decisions.’(Source)

2. Science is about facts. Diplomacy is about deals

In principle, science is about facts and diplomacy is about deals. But deals cannot be made in a vacuum. They have to rely on facts to some extent. Science can help increase the ‘factographic’ basis of diplomatic deals. Klaus Gottstein describes this contribution of science to diplomatic negotiations in the following way:

‘The crucial factors are rather a profound respect for facts, an urge to find out about the driving forces behind the phenomenological world, a scepticism about unproven assertions, a contempt for lies, and a desire to make progress and see results, which are elements of scientific culture and which sometimes enable scientists to contribute usefully to negotiations and, in special cases, even to break deadlocks.’

3. Dealing with complexity and uncertainty

When scientists cannot establish facts and predict with certainty, they strive to reduce uncertainty and complexity. Science and diplomacy can learn a lot from each other about dealing with complexity.

On the one hand, scientists may borrow from some diplomatic techniques to manage complexity, which is the modus operandi of the diplomatic profession. Diplomats act in highly complex governance arrangements that are multi-sector (involving various disciplines), multi-actor (including governments, civil society, business), and multi-level (ranging from local to global).

On the other hand, diplomats can enrich their professional toolkit with some of the techniques for reducing complexity which are explained in the next few points: causality and probability, big data, and scientific modelling. 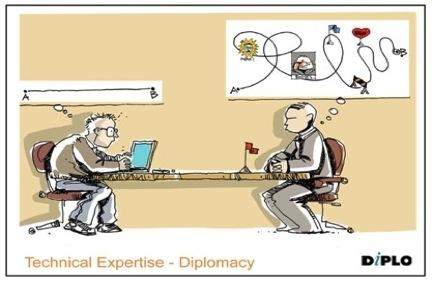 Some scientific facts, like the laws of physics, are cut and dried. But in our non-linear and chaotic world it is often difficult to establish links between causes and effects. Science has to resort to probability. For example, the Intergovernmental Panel on Climate Change (IPCC) specified the probability of man-made climate changes from ‘likely’ (2001) via ‘very likely’ (2007) to ‘extremely likely (2013). When negotiating likelihood descriptors, the IPCC walks a delicate line between science and diplomacy. Scientists set the parameters within which negotiators have to find exact descriptors through compromise.

In the search for facts, causality, and probability, scientists use a lot of data gathered through observation (such as in the field of climate change) or experiments (such as those done at CERN). CERN is one of the world’s largest processors of data. Behind current cloud computing applications, there are many technologies and approaches developed over decades in CERN’s grid-computing research. In addition to the WWW, grid computing is another major contribution of CERN to the modern digital world. Today, as big data enters the policy field, scientists at CERN and elsewhere could help diplomats use data to identify causations, or at least correlations, in dealing with global problems.

Scientists use alternative scenarios as a research technique. To develop these scenarios, they often use scientific modelling. Scientific modelling is also used in other fields, for example many physicists and mathematicians moved to Wall Street to advise financial firms on modelling and predictions.

Apart from a few experiments, the development community and diplomatic circles lag behind in using scientific modelling for exploring alternative scenarios. They could benefit from the expertise and experience of CERN and IPCC. In this process, all actors involved should be aware of ‘black swans’ (unknown unknowns), which are embedded in the complex and uncertain nature of global affairs.

7. Long term thinking (beyond the here and now)

Science is, and should be, ‘slow’ as one participant at the CERN/UN event indicated. Scientific laws transcend the here and now. This is important in an era where ‘instant’ reactions are often expected. Diplomats have to respond to the dynamism set by the media and politicians. This time pressure often makes reaching deals difficult. A good deal requires time. Several key recent successes in diplomacy happened very slowly, compared to our modern tempo: the Iran nuclear deal, the Cuba rapprochement, and the Kosovo negotiations all took months of careful confidence building. We need more ‘slow diplomacy,’ in the same way that science is slow, moving beyond the pressures of the ‘instant world’.

Scientists were early globalists, forming global networks long before Internet social networking sites were conceived. In managing international scientific cooperation, they have achieved a smart balance between formality (rules and regulations) and creativity. For example, CERN receives its legitimacy from its status as an international organisation established by an international treaty. At the same time, it preserves a high degree of flexibility and informality in its modus operandi through networking and agile management.

Similarly, at this nexus between formality and creativity, innovative solutions have been developed in diplomacy. Swiss scientific diplomacy is built around Swissnex offices in scientific centres such as Boston and San Francisco. Similar innovative approaches exist in other countries, including Denmark (Innovation Centre Denmark), Finland (FinNode), and Ireland (Irish Innovation Centre).

The process of peer review originated with science, where it is the main approach to the evaluation of scientific research. Peer review has been moving into diplomacy. For example, the Universal Periodic Review is inspired by the peer review approach, involving states that review each other’s human rights records. In a similar application, the African Union employs the African Peer Review Mechanism (APRM) as a way to promote good economic and political governance. Peer review mechanisms increase accountability and transparency. They are likely to be used more frequently throughout the implementation of Agenda 2030. 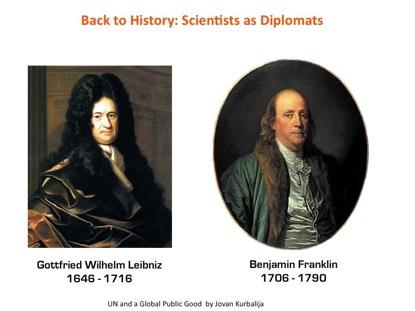 I tried to stay within the framework of ten main points. However, there are other fields of the interplay between science and diplomacy:

In discussion with the ‘community in the making’ from CERN and theUN, this initial mapping could be further developed and used as the basis for future research and a potential conference on science (and) diplomacy.

Teaching climate change: why the physical is not enough …

[Briefing #19] Internet governance in October 2015IGF Report: Helping you navigate through the IGF
Scroll to top