DiploFoundation’s Briefing Papers series focuses on a variety of issues related to diplomatic practice and internet governance (IG). The papers cover both recent events and historical developments which aim to provide diplomatic and IG practitioners with concise overviews of key and emerging issues they face. They offer a space for reflections beyond day-to-day work, but are simultaneously rooted in practice.

Our contributors are practitioners as well as academics.

If you have any questions, or would like to contribute to our series, please contact Dr Katharina Höne at katharinah@diplomacy.edu. 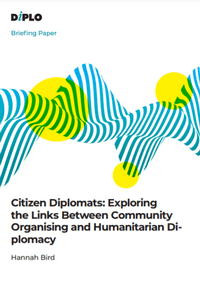 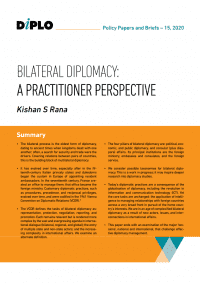 In this briefing paper, Amb. Rana provides an overview and mapping of bilateral diplomacy. He provides a number of taxonomies and examples that are useful for scholars and practitioners alike.

Virtual Reality and the Future of Peacemaking

By Julie A. Gregory 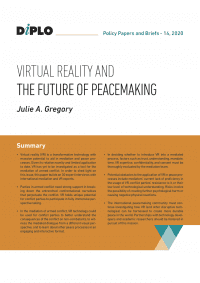 In this briefing paper, Ms Julie A. Gregory explores the potential of virtual-reality technology (VR) to support mediation and peace processes.

The EU’s New Commission: Digital Policy in the Limelight 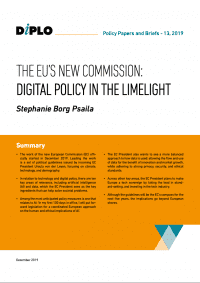 The paper underlines that: 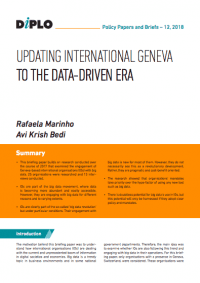 In this briefing paper, Ms Rafaela Marinho and Mr Avi Krish Bedi outline their research on how international organisations (IOs) in Geneva address and use big data in their work. 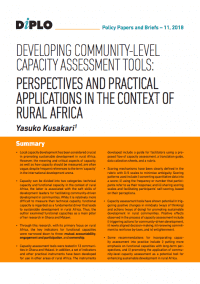 In this briefing paper, Dr Yasuko Kusakari builds on her research on community-level capacity assessment in order to make suggestions for assessment tools and scoring mechanisms. 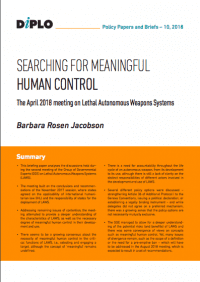 In this briefing paper, Ms Barbara Rosen Jacobson analyses the debate of the April 2018 meeting of the Group of Governmental Experts (GGE) of the Convention on Certain Conventional Weapons (CCW). The group was established to discuss emerging technologies in the area of lethal autonomous weapons systems (LAWS).

A Tipping Point for the Internet: Predictions for 2018 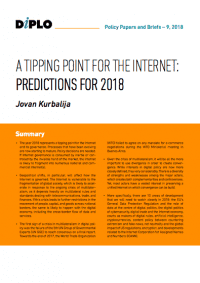 In this briefing paper, Dr Jovan Kurbalija shares his predictions for ten main digital policy developments in 2018. The forecast is set against this broad backdrop that makes progress and retreat equally possible. It draws on continuous monitoring of digital policy carried out through the Geneva Internet Platform’s (GIP) Digital Watch observatory and further discussed during the GIP’s monthly briefings. 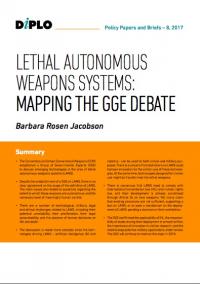 In this briefing paper, Ms Barbara Rosen Jacobson analyses the debate of the first meeting of the Group of Governmental Experts (GGE) of the Convention on Certain Conventional Weapons (CCW). The group was established to discuss emerging technologies in the area of lethal autonomous weapons systems (LAWS).

Digital Diplomacy and the ICRC 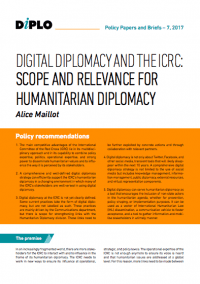 In this briefing paper, Ms Alice Maillot discusses the potential of digital diplomacy for the International Committee of the Red Cross (ICRC). She looks at the changing nature of diplomacy, new developments in digital diplomacy, and how the ICRC can implement and adopt some of the current trends. 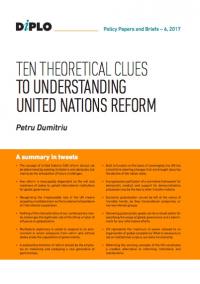 In this briefing paper, Dr Petru Dumitriu offers ten theoretical clues to understanding UN reform. Among other issues, he discusses the UN mandate, limits of power, and questions of legitimacy.

Leaving No One Behind in the Data Revolution 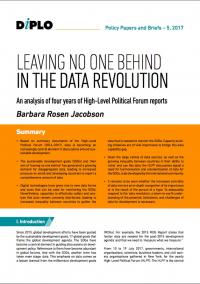 In this briefing paper, Ms Barbara Rosen Jacobson analyses data-related discussions of the High-Level Political Forum on Sustainable Development (HLPF) between 2014 and 2017. 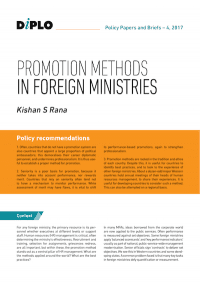 This briefing paper emerged from Diplo’s participation in Namibia’s Foreign Policy Review Conference (July 2016). In this paper, Dr Katharina E. Höne suggests a three-pronged approach to Namibia’s digital foreign policy and diplomacy, and looks at the discourse on information and communications technology (ICT) and development. 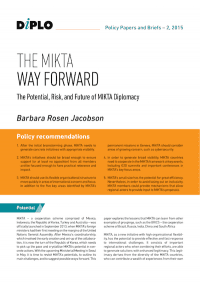 Ms Rosen Jacobson assesses the potential, risk, and future of MIKTA, a cooperation scheme comprising Mexico, Indonesia, the Republic of Korea, Turkey, and Australia, which was officially launched in September 2013. 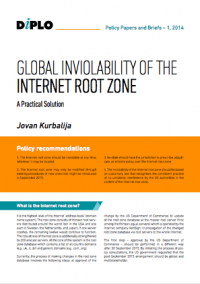 Dr Kurbalija explains the internet root zone, and highlights the context and controversy of questions about its inviolability. Possible solutions identified by him include legal elements (customary law, diplomatic law, common heritage of mankind), ‘software’ inviolability, and ‘hardware’ inviolability.