Many digital policy areas increased in relevance in October when compared to previous months. The debates which surrounded a number of important events and court judgments during the month have continued to shape the WSIS+10 and IANA transition processes, and key areas including cybersecurity, privacy and data protection, and net neutrality.

The October developments were discussed during the Geneva Internet Platform’s webinar briefing for October. Dr Jovan Kurbalija, DiploFoundation director and GIP head, highlighted the main developments as well as the findings of the IG Barometer for October. 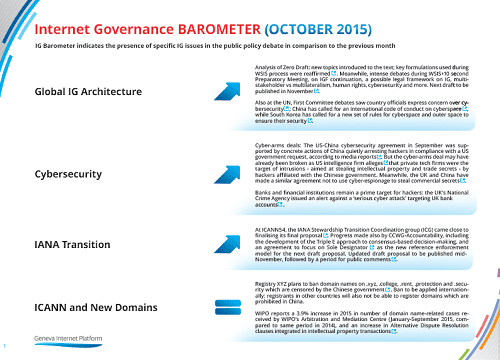 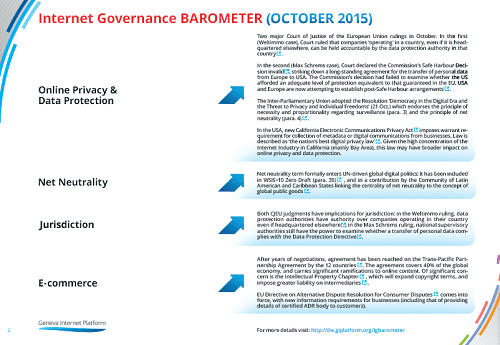 Some of the main events which took place in October were:

A more detailed list of events is available on GIP Digital Watch.

The Global IG architecture was shaped by a number of important developments in October. Ten years have passed since the Tunis Agenda was adopted in 2005. This year marks the ten-year review of the agenda, which will culminate with a High-Level Meeting in December in New York. At the moment, negotiations on the outcome document are ongoing. In early October, a Zero Draft version was published, which was analysed by Dr Kurbalija. His analysis showed that new topics were introduced for the first time in the draft (such as net neutrality), while key formulations used during the WSIS process were reaffirmed. In mid-October, two meetings helped to further shape the draft document. In particular, WSIS+10 Second Preparatory Meeting saw discussions on the continuation of the IGF, on a possible legal framework on IG, human rights, cybersecurity and more. (Follow the latest WSIS+10 updates.)

Also at the UN, Dr Kurbalija explained that during the First Committee debates, officials expressed concern over cybersecurity. China called for an international code of conduct on cyberspace, while South Korea called for a new set of rules for cyberspace and outer space to ensure their security.

A leak revealed that Russia plans to create a ‘national information platform’, allegedly aimed at eliminating Russia’s dependence on Western firms and technology.

In the area of cybersecurity, the main developments were in relation to the cyber-arms agreement reached by the USA and China, which has not yet been formalised. According to reports, the agreement was preceded by a truce, when China allegedly arrested hackers in compliance with a US-request. A similar agreement to prohibit the use of cyber-enabled commercial espionage was reached by the UK and China.

When it comes to cybercrime, banks remain a prime target by hackers. In the UK, for example, the National Crime Agency issued an alert against a ‘serious cyber attack’ targeting UK bank accounts. Other breaches were reported by other financial institutions.

A number of developments took place during ICANN54 in Dublin in relation to the IANA Transition process. The process started in March 2014, after the US’ National Telecommunications and Information Administration’s (NTIA) announced its intent of transitioning its oversight role unto the global multistakeholder community. In Dublin, the Cross Community Working Group on Enhancing ICANN Accountability (CCWG-Accountability) developed the ‘Triple E’ approach (engagement, escalation and enforcement) for consensus-based decision-making, and agreed to focus on the Sole Designator model. The IANA Stewardship Transition Coordination group (ICG) was very close to finalising its final proposal, which it did on 29 October. (Follow the latest IANA Transition and ICANN Accountability updates.)

With regards to new domain names, a request made to ICANN showed that the registry XYZ plans to ban domain names on .xyz, .college, .rent, .protection and .security which are censored by the Chinese government. The ban is to be applied internationally, with registrants in other countries being unable to register domains which are prohibited in China.

During the 55th Assembly of WIPO Member States, WIPO reported a 3.9% increase in 2015 in number of domain name-related cases received by WIPO’s Arbitration and Mediation Centre (statistics for January-September 2015, compared to the same period in 2014), and an increase in Alternative Dispute Resolution clauses integrated in intellectual property transactions.

Two major judgments by the Court of Justice of the European Union dominated the discussions on privacy and data protection. In the first case on 1 October (Weltimmo case), the Court ruled that companies ‘operating’ in a country, even if it is headquartered elsewhere, can be held accountable by the data protection authority in that country. In the second (Max Schrems case), the Court declared the Commission’s Safe Harbour Decision invalid, striking down a long-standing agreement for the transfer of personal data from Europe to the USA. The Commission’s decision had failed to examine whether the US afforded an adequate level of protection equivalent to that guaranteed in the EU. It remains a question as to what post-Safe Harbour arrangements will be reached by the USA and EU. Meanwhile, the judgments will also have an impact on jurisdiction and the powers of national data protection authorities in the EU.

Other developments related to privacy took place: the Inter-Parliamentary Union adopted the resolution Democracy in the Digital Era and the Threat to Privacy and Individual Freedoms (21 October), which endorses the principle of necessity and proportionality regarding surveillance (para. 3) and the principle of net neutrality (para. 4); whereas in California, a new Electronic Communications Privacy Act which imposes a warrant requirement for the collection of metadata or digital communications from businesses, is set to become a domestic model for privacy legislation.

Net neutrality – a digital policy area which was highly prominent in digital politics at the start of the year – has gained relevance again. The term formally entered global digital politics when it was introduced in the WSIS+10 Zero Draft, and was also at the centre of debate at the European Parliament. During the briefing, the Parliament in fact rejected the proposed amendments, agreeing instead to the originally proposed rules which are thought to carry a number of loopholes that could lead to a tiered Internet.

With regards to e-commerce, Pacfic Rim countries agreed on the Trans-Pacific Partnership Agreement, including the controversial chapter on Intellectual Property. Meanwhile, the EU Directive on Alternative Dispute Resolution for Consumer Disputes came into force, imposing new information requirements for businesses.

Updates from DiploFoundation and the Geneva Internet Platform

In October, Diplo and the GIP organised two events:

In November, DiploFoundation in co-operation with the Internet Society (ISOC) and its ambassadors will provide just-in-time reporting from the 10th Internet Governance Forum. The reports will complement the dynamic updates offered through GIP Digital Watch.

November will once again be a busy time for Internet governance. A number of events are scheduled for the next few weeks, including the annual Internet Governance Forum which will this year be held in João Pessoa, Brazil. Other main events include:

A more detailed list of events, and more information about each event, is available on GIP Digital Watch.

The next webinar briefing – Internet governance developments in November – will take place on Tuesday, 24th November. 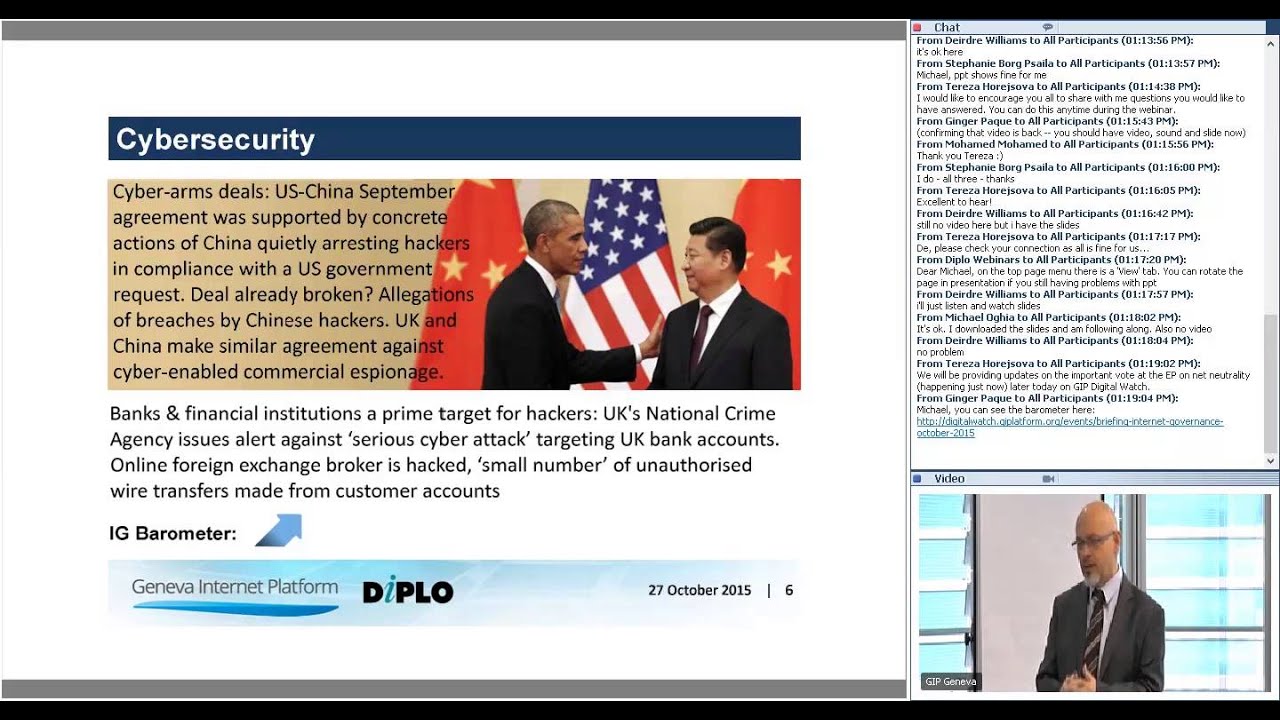 and download the presentation. The recording includes a discussion based on the round-up of developments for October.

Join us for the next briefing on 24 November; registrations are now open. The briefing will be delivered live in Geneva, and online for remote participants.

[Web discussion summary] Norms and confidence building measures (CBMs): Are we there yet?