You are here: Home1 / The art and science of negotiation training

The art and science of negotiation training

Can negotiation skills be taught? Some argue that they cannot; they are only acquired through practice. But while it is true that any skill is honed through deliberative practice, Prof. Raymond Saner, teacher of international and multi-stakeholder negotiations at the University of Basel, and Prof. Paul Meerts, visiting professor in international negotiation analysis at the College of Europe in Bruges, believe that teaching negotiation is not only possible but absolutely crucial.

According to Prof. Saner, the need for negotiation is part of the condition humaine. Wherever people live, conflicts are inevitable. They can be solved constructively, but sometimes people cannot find common ground and try to resolve conflicts through armed conflict. At times it is difficult to convince the parties involved to consider alternatives to war, they may not see the value in resolving conflict through peaceful means. It is part of human anthropology to engage with others, to develop empathy and to create social dynamics. Negotiation is probably one of the first skills that we learn as children.

The online audience was engaged in a lively discussion where some of the participants argued that negotiation cannot be taught, but that successful negotiations also depended on cultural backgrounds, instinct and social skills.

Negotiations: the difference between teaching and training

Prof. Saner explained the difference between teaching and training negotiation. Teaching negotiation focuses on the theoretical, conceptual and research parts. Many schools of thought have contributed to our understanding of what negotiation is all about (cognitive differences, communication, bounded rationality, those that look at the topic from the behavioural or cultural perspectives, game theory, process theory). Training has a personal learning component. The audience is specific, we begin with generic concepts and then address particular needs. During a short period of training, a person learns how to apply this knowledge to their personal repertoire of skills.

Some of the online participants argued that the ability to negotiate may be strengthened or weakened by the social system, and offered a metaphor – how teaching or training should help individuals use their ‘negotiation muscle’. Prof. Meerts suggested that children are the most effective negotiators as they use their parents’ love as the resource of power – they borrow power from the more powerful. One of the problems in teaching negotiation is dealing with emotions, especially in political negotiations. If we see negotiation as a tool for training people within a political context, problems may occur when dealing with the egos of politicians – egotiation, when their ego is more important than the interest of their country.

Dr Kurbalija asked if a specific approach is needed for training and teaching different communities in negotiation: business, diplomatic, and NGOs. Prof. Saner said that where possible, a special program should be designed for each specific type of training seminar, whether it is bilateral, trilateral or multilateral, multi-institutional, state to state, or state to non-state actors negotiation. It is good to have homogeneous groups and to know their background, allowing teachers to prepare to address the specifics in advance.

An interesting question was posed: How to find a balance between the exciting part – which is negotiation training, and the less exciting part – the procedural aspects. In Prof Meerts’ opinion, procedures tend to suffocate the negotiation process, as it is easy to learn the procedure, but not the process itself. It is therefore best to emerge people into the process and allow them to get to the heart of negotiating and reaching a compromise, and then to add procedure where it is needed.

Prof. Meerts explained the differences and commonalities in training for different organisations, such as NATO, the ASEAN and the UN. He mentioned that even though each organisation has its own context, 90% of training is in the negotiation process, and the rest is tailored to the particular context of the organisation. He also pointed out that reaching common ground is important, and that it can only be achieved if there is a convergence of interests for both parties. A good negotiator is capable of creating a common ground. It is not all about compromise, the common ground can also be created by trade-offs.

How can negotiators be trained to reach a common ground? Prof. Saner paraphrased Sun Tzu: ‘in order to succeed one should know oneself, and one should know the other party. If one does not know either of the two, there is no hope of succeeding in the negotiation’. There is an established field of knowledge based on research that should be the basic minimum one should apply before going to negotiations.

Participants made a quick reflection on the importance of wording and how rich social dynamics converge to a page of text – they stressed the importance of language and the linguistic part of the process. Constructive ambiguity is the ability to construct a text in such a way that everybody will agree to it, but perhaps it will not go beyond that. Wording can also be used to avoid certain agreements.

At the end of the debate, Dr Kurbalija said that the key dilemma is how to identify when it is alright to react by intuition, and when to use rational insights. Prof. Saner said that in negotiation it is particularly important to listen to what the other party has not said, to try and reveal the hidden part of the iceberg.

In his concluding remarks, Prof. Meerts said that negotiation is art and science at the same time. Some people are better at negotiation than others, but one can still accomplish a lot with training. Prof Saner said that procedure in negotiation is the bread and butter as it structures the process, but we have to go beyond that, as procedure alone does not guarantee a successful negotiation.

References to authors and works mentioned during the discussion

During the presentation, panelists made a lot of references to books related to the field of negotiation. Prof. Meerts offered two resources on negotiation (free download):

Dr Kurbalija mentioned the following book during the debate:

Join us again next month!

Watch the recording of the September WebDebate. The next WebDebate will be held on Tuesday, 4th October. Registrations are now open.

[WebDebate #3 summary] Is research on diplomacy relevant and useful? 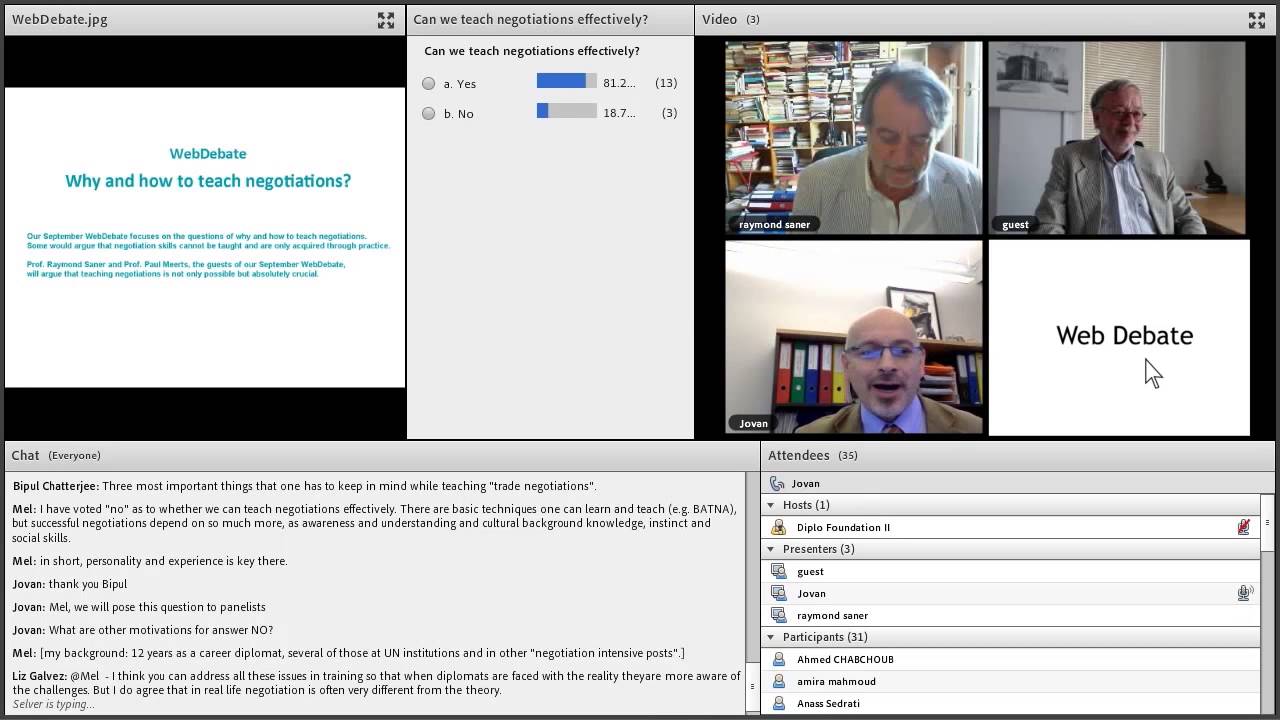