You are here: Home1 / Diplomacy as poetry

Can poetry help diplomacy? A joke, surely! Poetry and diplomacy are worlds apart and have nothing in common other than using language as a medium. Diplomacy is devoid of poetry unless, that is, we count the alliteration in President Trump’s ‘fire and fury’ and ‘locked and loaded’ sabre rattling.

Conversely, few diplomats have the time to write poetry while in service: the days of diplomats as Nobel laureates are long gone. In this posting, I nevertheless suggest that there are several common denominators between poetry and diplomacy that are worth exploring.

Imagine a magic capsule which, when consumed, releases a great amount of energy and motivation, endowing individuals with enhanced powers and giving communities a heightened sense of purpose and identity. Values are just such an Asterix & Obelix potion, which explains the central role of ethos in religious, cultural, and corporate circles.

At the same time, values remain elusive things which none of us can readily define: What exactly are honour, dignity, honesty, and integrity, and do these words mean the same to different people? Perhaps this slipperiness is indeed a central part of the power of values: Even though we cannot pin them down, all of us intuitively understand them, most of us live by them, and some of us are even willing to die for them. 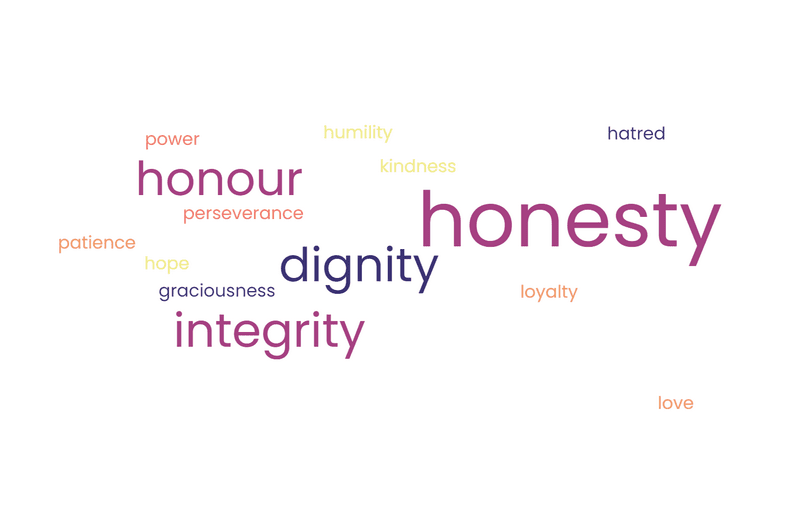 In this respect, poetry and diplomacy differ with regard to function, flexibility, and creativity. However, these self-same attributes come back into play when the diplomat is faced with a negotiation impasse. Where agreement cannot be reached in the here and now because the gulf between positions is too great, shared values may offer a bridge. This is because values, in being both aspirational and abstract, can give players something to agree to (we all want a better world for our children), while avoiding the charge of having compromised themselves by reaching a compromise. Recasting the narrative of deadlocked negotiations in order to find common values is an art that resembles poetry, both in its questioning of the dominant order and in its ability to imagine an alternative one.

This creative process of imagining a counterbalance to anomalies and potential injustices in the status quo is called ‘redress’ by the Irish Nobel laureate, Seamus Heaney (The Redress of Poetry and Crediting Poetry).

Words can and do change outcomes. In poetry, this is often at a personal level, although national sensibilities have also been shaped by individual poets, just as they have by topics such as British poems on WW1. In diplomacy, the power of words to shape the world we live in is more evident and probably more far-reaching, but both professions use language in order to engage and maybe even alter the way people see the world. This may, in turn, influence how they act.

This similarity notwithstanding, there are some important differences over why and how poetry and diplomacy engage in the process of redress.

With regard to aims, the driving objective of diplomacy is security: securing peace (or in the case of war, terms of engagement), securing territorial integrity, securing agreements, securing information (both in the sense of obtaining and defending), and ultimately, securing a country’s best interests. Where conflicts arise between interests, or where concerns transcend national boundaries, diplomats are tasked with seeking compromise and counterbalance, where possible though inclusive (win-win) solutions.

Poetry, in contrast, does not have as its primary objective to secure or even to change anything. As the poet W.H. Auden said, ‘Poetry makes nothing happen’ (poem ‘In Memory of W. B. Yeats’) and as President Kennedy urged, ‘Society must set the artist free to follow his vision wherever it takes him.’ The poet’s objective is to remain creatively free.  Being socially engaged, negotiating and renegotiating meaning, values, and allegiances are all options, but not responsibilities.

Indeed, the poet can best ‘speak truth to power’ when speaking from a non-partisan position. These differences in aims and accountability are significant, for in contrast to the poet, the diplomat’s primary responsibility is to their ministry of foreign affairs and home government. They speak for their country at all times.

A second difference concerns the language used in poetry and diplomacy. The manner of expression is a component part of Heaney’s notion of redress: Is the poet’s language authentic and does it ring true? If not, poetry is at risk of becoming a political conduit, perhaps a mouthpiece. In contrast, diplomacy is always a mouthpiece, its language formulaic, coded, and – in the context of multilaterals – often eroded.

So, it would seem that although poetry and diplomacy are both in the business of redress, they do so for different reasons and in a different voice. And yet, as I explore next, significant similarities may still be found in how poets and diplomats use and understand ambiguity.

Ambiguity and the unsaid

Poetry is often considered difficult, and diplomacy duplicitous, because the language used is so ambiguous. If anything, this condemnation has been reinforced by the KISS-culture we inhabit (Keep It Simple, Stupid, or Keep It Simple and Straightforward).

A good visual model of ambiguity is the well-known ‘duck-rabbit’ picture, a drawing which can be seen as either a duck or a rabbit, but not both at the same time.

Yet, multiplicity of meaning can be an advantage, not least in being less binary and binding than the black and white of literal language. There are many reasons for resorting to implicit communication, ranging from tact and the inherent indirectness of politeness, to the desire to keep our cards close to our chest. The unsaid allows us to keep options open and retain plausible deniability. It also helps us to elicit insights and conclusions rather than dictate them. Finally, it is central to creating a sense of community through shared conventions: the expression ‘speaking the same language’ refers in large part to that sense of solidarity that comes from understanding each other without having to explain ourselves.

Both poetry and diplomacy recognise the value of ambiguity, and both have made a virtue of ‘telling it slant’ (Emily Dickinson’s poem ‘Tell all the Truth but Tell it Slant’).

In poetry, multiple meanings give rise to richer readings, all of which can potentially co-exist. In diplomacy, ambiguity similarly allows one and the same piece of language to accommodate two or more potentially irreconcilable positions.

In providing common ground for disparate meanings, the unsaid has the same power as values (themselves good examples of under-specification), to achieve consilience.

The main difference between poetry and diplomacy with regard to the unsaid has to do with perception: resorting to the unsaid is seen as an invitation in poetry, an inclusive embrace of diverse meanings, whereas it is all too often seen as a deception in diplomacy, a sleight of hand in a win/lose dynamic.  This negative judgment risks blinding us to the value of ambiguity, just as it has already blinded us to the advantages of ambivalence, discussed next.

This last common denominator has to do with the state of experiencing two opposing thoughts or feelings simultaneously. The connotations of the term ‘ambivalence’ are largely negative, suggesting indecision, vacillation, contradiction, inner conflict, and by extension, unreliability. Yet the ability to encompass two (ambi) strengths (valence) is not necessarily a setback, quite the contrary. As Scott Fitzgerald explains in his essay collection The Crack-Up: ‘The test of a first-rate intelligence is the ability to hold two opposed ideas in mind at the same time and still retain the ability to function.’

Poets retain the ability to write while holding in mind all the strands of meaning they want to develop. Poetry lovers similarly retain the ability to read and understand multiple meanings as these evolve simultaneously. An equivalent ambivalence characterises musical scores, as it does a game of chess and sundry other human endeavours, diplomacy included. So, to dismiss our ability to hold opposing forces in mind as a weakness rather than a strength is to be misled by the connotations of the term ambivalence.Let us by all means change the term – replace it with ‘constructive ambivalence’, ‘discerning doubt’ or ‘consilience’, for instance – but let us not throw out the baby with the bathwater!

How does the diplomat ‘retain the ability to function’ while experiencing ambivalence? Here, a final contrast needs to be explored, one linked to the divergent aims of poetry and diplomacy discussed earlier.

Whereas the poet need not achieve anything beyond expressing themself and engaging their reader, maybe even by rattling readers, the diplomat must speak for their country and secure its interests. Ambivalence ultimately has to resolve itself into effective action, and to achieve this, the diplomat must develop acumen: diplomatic acumen regarding what to say, and when and how to say it, and political acumen regarding whether to act (or react) at all.

We have surveyed some significant similarities between poetry and diplomacy:

Far from being worlds apart, the areas of overlap between poetry and diplomacy are significant enough to enrich our understanding of each, and perhaps to change our perceptions and reactions to both.

Nevertheless, some notable differences may be found within each of these orders of knowledge, primarily to do with aims and accountability, the status of formulaic language, and the necessity to be diplomatic, if not to practice diplomatic acumen (what to say, when, and how).

After a lifetime of negotiating the strife and stress of ‘The Troubles’ in his native Northern Ireland through the medium of poetry, Seamus Heaney resolved, like F. Scott Fitzgerald, that the ability to contain different world orders within ourselves is what we should aspire to: ‘Whatever the possibilities of achieving political harmony at an institutional level, I wanted to affirm that within our individual selves we can reconcile two orders of knowledge which we might call the practical and the poetic; to affirm also that each form of knowledge redresses the other and the frontier between them is there for the crossing.’

Having crossed the frontier between poetry and diplomacy, I conclude that poetry can indeed help diplomacy, not least by promoting ambiguity as a resource, ambivalence as a strength, and acumen as a necessity!

This blog is based on a talk I was invited to give by the Diplomatic Academy of the Czech Ministry of Foreign Affairs at the Summer School of European Studies in Telč in August 2017, entitled ‘Diplomacy as Poetry: The Say Forward in an Age of Mutual Distrust?’ My thanks to Dr Michal Kořa, deputy executive director of the Aspen Institute CE, and Dr Vera Jerabkova, director of the Diplomatic Academy: I am in awe of their belief that poetry might have anything to offer diplomacy today (imagine an MFA commissioning a talk on poetry!) and very grateful that they involved me in finding out!

Visit our Language and Diplomacy page.

Do you see ambiguity in diplomacy as a form of manipulation?

Is ambiguity an effective diplomatic tool?

[WebDebate #10 summary]Diplomats as Writers – Marrying the Arts and Diplomacy

Diplomatic immunity law and jus cogens: Can the relationship result in invalidating...Wreckers are as important as builders
Scroll to top