You are here: Home1 / Language in the time of the coronavirus crisis – UK case study

Language in the time of the coronavirus crisis – UK case study

We all know that language changes over time, but we rarely have the chance to watch it mutate in real time…

We all know that language changes over time, but we rarely have the chance to watch it mutate in real time, and few of us could have imagined that it would change as fast as it has in the last few weeks. From the coinage of new words (social distancing, viral load, the shielded) to the redefinition of existing terms (selfish, essential), and the centre-staging of rarely-used ones (furlough), change is evident at the lexical level.

It is also at work at the figurative level, with the promotion of analogies (a marathon, not a sprint), the reworking of familiar metaphors (war, waves, curves and surges), and the appeal to original ones (to embrace in phrases such as ‘the government has put its arms around the people’). And then, of course, there is the use of tricolons (the WHO’s call to test, test, test! and the UK’s motto Stay at home. Protect the NHS. Save lives).

Language-change is thriving under the reign of the coronavirus crisis, and this series of blogs on rhetoric (see previous blog) explores some of the ways in which we are creating new usages by resorting to familiar resources.

Framing: The art of focussing attention

Framing shapes all communication, and here we focus on the use of metonymy (speaking of one thing in terms of another), as a framing device. It is present in the imperative issued by governments across the world to stay home in order to avoid overwhelming the medical system and to save the health service. What these words bring to mind is overstretched doctors and harried nurses, medics in blue scrubs trying to be everywhere at once. A follow-up image might be these selfsame medics crying from exhaustion, collapsing under the strain, and succumbing to the virus themselves. We have seen distressing footage of such scenes from China, Italy, and Spain, and we continue to see medical staff making personal appeals on camera from different countries urging us all to take this virus seriously and stay at home in order to save lives.

These images are distressing. But they also distract us from what is potentially an even more distressing image – that of hundreds of patients dying in agony from slow suffocation and organ collapse, untended, and alone. Untended because there simply aren’t enough ventilators for all the patients in critical need, alone because there simply aren’t enough medical personnel to hand, and of course because the imperative of isolation prohibits loved ones from being present. 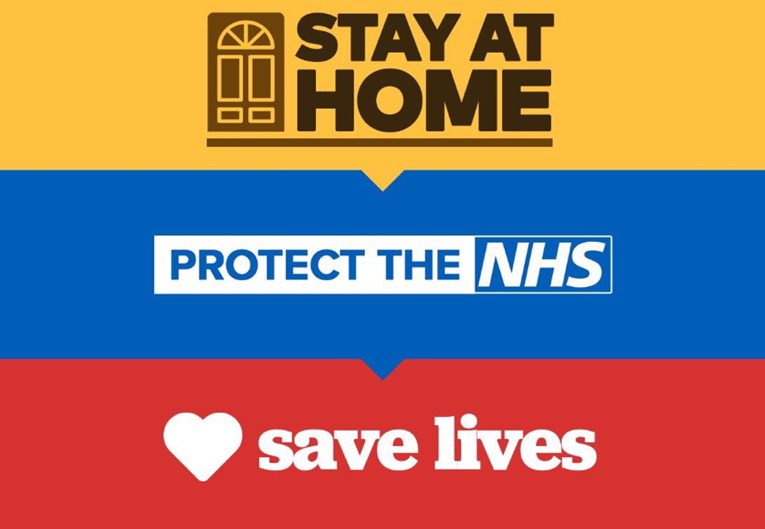 ‘Stay at home. Protect the NHS. Save lives’ is the British motto associated with the corona crisis. It is emblazoned on the lecterns used during the government’s daily news briefs that began on 23 March, the day that lock-down was announced in the UK, and it is repeated by all officials like a mantra. Increasingly, arrows link the three injunctions, creating a cause and effect chain: if you stay home, then you can protect the NHS, and thereby save lives.

Tricolons (the use of triplets for rhetorical effect) are short, punchy, and memorable, but in this case the three elements do not form a natural category. ‘Stay at home’ and ‘Save lives’ go hand in hand because isolation helps to prevent transmission. But in order to remain within the same narrative thread, ‘Protect the NHS’ should actually read as ‘Prevent rapid transmission and a surge in critical cases that will outstrip capacity, thus resulting in preventable deaths.’ Bad scansion! ‘Protect the NHS’ could have been replaced by ‘Stop the spread’.

This is where framing comes in: it is easier to mobilise a population by appealing to the positives of compassion, national pride, and constructive action than by asking people to stand by helplessly as thousands die an agonising death, some of which may have been avoided had the necessary measures been undertaken in good time.

The National Health Service (NHS), which celebrated its 70th anniversary in 2018, is not only a focus of pride in the UK, but an inherent part of the national identity. It is seen by many as an embodiment of the British social conscience. Asking the population to protect the NHS is both empowering (only the resourceful can offer protection), and affirming of a collective identity (‘our NHS’). Where staying at home is equated with protecting the NHS, the vast majority will respond to the appeal.

‘Protect the NHS’, as well as being a carrot, is also a metonym.

Metonymy: A case of Newspeak?

‘Don’t you see that the whole aim of Newspeak is to narrow the range of thought?’ – George Orwell, 1984

Metonymy is familiar to us in expressions such as ‘many mouths to feed’, ‘too few hands on the job’, ‘bums on seats’, ‘blue berets’, ‘Number 10’, or ‘the Kremlin’. It is a figure of speech which allows us to speak of one thing by referring to something closely associated with it.

The ‘thing’ closely associated with the phrase ‘Protect the NHS’ are the critical cases dying like flies with no hope of treatment. Italian and Spanish medics have given heart-rending warnings about the inevitable triage that takes place as more patients come in that can possibly be cared for. And whereas the term ‘triage’ suggests an evaluation of who should be given priority, the reality on the ground where resources fail to meet demand is more arbitrary than that: choice is replaced by chance.

Governments are doing everything they can to try and stay ‘ahead of the curve’ by designing, producing, and distributing the necessary equipment, from Personal Protective Equipment (PPE) to ventilators, antigen, and antibody tests. And they want us to do as much as we can by slowing down the rate of transmission through self-isolation. ‘Protect the NHS’ as well as an important objective in its own right, is also being used as code for ‘prevent additional deaths’.

Is the use of this metonym a form of Orwellian Newspeak, where ‘Newspeak’ refers to the control of language in order to control thought? I think it is definitely a form of spin which casts as positive a light as possible on a very sombre situation. It is also a welcome spin: galvanising the population to respond in the most constructive way is better than punishing or terrorising them into doing so. And yes, there may be a way in which we are indeed being discouraged from looking too closely at what lies behind the words. That is not necessarily bad, for as long as it is also OK for those who want to question what is being said to do it too. Spin should not prohibit free thinking even as it aims to influence it.

A focus on saving the health service is an appeal to reciprocity, compassion for the living, and support for those on the front-line willing to sacrifice themselves for us all. It is also a distraction from the agony of the dying. Both are legitimate objectives, but in these times of high tension when everything is changing so fast, it is easy for diversionary tactics through framing and phrasing to slip past us unnoticed. This blog does not aim to pass judgment but is simply drawing attention to rhetorical resources in action.

Dr Biljana Scott, the author of this posting, developed and lectures on Diplo’s Language and Diplomacy course. In this course you can learn more about many of the topics discussed in this post, for example framing and reframing, as well as linguistic devices to develop a persuasive argument.

Digital (and) diplomacy: Pandemic videoconferencing levels off at low altitude

Internet governance in March 2020[ConfTech #5 discussion summary] How to ensure the functional continuity of...
Scroll to top