You are here: Home1 / [WebDebate #19 summary] What is the potential of big data for diplomac...

[WebDebate #19 summary] What is the potential of big data for diplomacy?

We leave digital footprints everywhere. Modern society is marked by data which is continuously generated through various devices and in numerous ways – such as through social media, Internet browsing, and through satellite images, among others. This is why some call this the Big Data Era. While big data has become a topic for the private sector, promising greater efficiency and new business insights, it remains unclear what the potential of big data is for diplomacy. Our February WebDebate dealt with this question, endeavoring to examine how ministries of foreign affairs (MFAs) can and should adapt. The WebDebate also gave an overview of DiploFoundation’s new report, Data Diplomacy: Updating Diplomacy to the Big Data Era, commissioned by the Finnish Ministry of Foreign Affairs.

Joining us this month were Ms Barbara Rosen Jacobson, programme manager at DiploFoundation and the Geneva Internet Platform, and Mr Ossi Piironen, a member of the Policy Planning and Research unit at the Finish MFA. Rosen Jacobson, one of the authors of the report, shared the first insights from the report’s executive summary, while Mr Piironen added insights from the practitioner’s perspective and explained why the his ministry commissioned the report. The debate was moderated by Dr Katharina Höne, research associate in diplomacy and global governance at DiploFoundation.

Reasons for commissioning the report

The Finnish MFA wanted to examine the importance of big data for diplomacy. They identified a need to gather concrete examples of MFAs and other foreign policy actors, such as international organisations, using new types of data sources or new types of data analysis. Piironen believes that this kind of discussion and analysis is in demand in Europe, as was evident in the seminars organised as part of the project. The report showed that there are indeed some occasions in which new types of data have been put into use by foreign policy actors and that there were some attempts to institutionalise the collection and analysis of new data sources within certain organisations. Piironen’s strongest impression, however, is that new data sources are not utilised as widely and effectively as the hype and strong rhetoric would suggest.

What is Big Data? A phenomenon and an evolution

Piironen underlined that, in his view, big data is a phenomenon, not a type of data or a type of data source. The concept is merely supposed to point out that there is an increasing amount of data that comes in widely varying formats and which is scattered in multiple locations. The concept may additionally imply that because of the increased connectivity and capacity to store and process this ‘raw material’, we have real possibilities to put some of it into use for our benefit. However, the data and its sources are so diverse that it rarely makes sense to generalise. Piironen argued that much of the actual data associated with big data is rather conventional. Overall, Piironen sees no revolution but rather an evolution. There are relatively new types of data and some of them have real foreign policy consequences and uses, and it is quite justified for MFAs to focus on this. On the other hand, the report makes clear that MFAs should stay realistic about the opportunities these new data sources may offer. Piironen concluded that we are not using big data, but merely various types of data, and that some of these come from relatively new sources.

Rosen Jacobson cautioned that a universal definition of big data does not exist. Many people discussing big data want to define it in a way that fits in with their work. She explained that Diplo’s report looks at two dimensions of big data: the types of data, and the types of data analysis and methodology. The authors examined the type of data, the use of data sets, and the fact that big data usually requires tools that were previously not available. The authors also examined how big data can provide trends and correlations and patterns that can be used in the analysis of foreign policy. To this end, four kinds of data were examined: sensor data (e.g. GPS data from mobile phones), web data (e.g. social media profiles or web scrapers), geospatial data and satellite data, as well as textual data (e.g. conference transcripts).

Are diplomats ready and equipped to manage data, including big data?

Speaking from a practitioner’s perspective, Piironen stated that the use for new data sources in the Finnish MFA is quite minimal. The communications department is the most advanced in this respect, possessing the tools to monitor the social media visibility of Finnish foreign policy actors. However, the analysis of this data has been commissioned to outside actors, as the Finnish MFA does not have the expert resources for this level of analysis. Piironen’s belief is that Finnish diplomats do not have to become experts in the field in the immediate future. Rather, he believes that most of the analysis and collection of data will be done by international organisations, for profit firms, other government agencies and national statistics offices, because the foreign policy related data is usually international in its scope and one MFA in one country can hardly provide meaningful data that could be used in the day to day work of the MFA.

Rosen Jacobson highlighted the many areas of diplomacy that could benefit from big data. Thus, the report suggests that MFAs should establish big data data units, that combine data scientists and diplomats, and that can collaborate with all other units in the MFA. The key question then is how to ensure that diplomats and data scientists communicate effectively, because although the analysis itself is conducted by the data scientists, it is necessary for the diplomats to know what is possible with big data, and what is not, what types of data sources there are, and what kind of questions they should ask the data scientists.

Höne pointed out that capacity building is a big part of the report. However, awareness-building needs to happen first, and it should happen by using examples that illustrate  how big data can help in the daily work of diplomats, how big data can foster the mission of the MFA, and where its limits are. In this regard, the report recommends different levels of capacity building: beginner, intermediate and expert level. Not everyone has to have the same skills, but everyone needs to have a general awareness (beginner level) about the opportunities and limits of big data. And then, depending on what the diplomat is actually working on, a higher set of skills.

The possibilities of big data

First, big data could bring new information, challenge bias and corroborate existing information. Hence, it is particularly relevant for information gathering and policy research. Second, big data could help in better understanding people’s perceptions and behaviour and is, therefore, particularly relevant for communication, public diplomacy, and negotiation (e.g. sentiment analysis in social media). Third, big data can help meet the expectations of government service delivery, which, in the context of diplomacy, is relevant for consular work. With big data analysis, e-government services can fine-tune the service delivery, better respond to questions, but also better provide support in emergency situations. Fourth, big data can contribute in tracking programmes and progress over time and space, which is particularly relevant for trade and development. Fifth, big data can track developments over short time periods – some big data can be made available almost in real time, and this could be useful in emergency response and humanitarian affairs.

The report also looks into identifying the new forms of evidence and accountability on the basis of big data, which is very relevant for international law. This is an emerging area and there are no firm cases and insights yet, except for several instances where satellite data was used as evidence in international courts.

An example of big data analysis

The best example, which shows the entire spectrum of possibilities and constraints of big data analysis, is the monitoring of epidemics through GPS data. A good example is the cholera epidemic in Haiti in 2010, where an NGO partnered with a mobile operator to see whether the epidemic and its spread could have been predicted. The NGO was given anonymous data on GPS movements of the population throughout Haiti from the first contaminated area, to the rest of Haiti. The population movement turns out to correspond to the spread of the disease, which means that the spread could have been predictable to an extent and the response could have been more effective. This, however, is sensitive information, and issues such as privacy become very important. Moreover, the quality of data is essential, for example: if the population does not use mobile phones very much or only the wealthy do, the picture presented will not be accurate, as it will only show what a small segment of society is doing.

Höne raised the issue of the organisational culture of MFAs. MFAs prefer qualitative data, highlighting the importance of narrative, while big data can be perceived as quite the opposite.

Rosen Jacobson then proceeded to explain that this issue can be mitigated. Big data is complementary to expert insights. It can point out biases of expert insights, it can provide new information, and it can confirm ideas or corroborate information. However, expert knowledge is needed to contextualise the insights of big data studies and to make them usable. Therefore, the perceived dichotomy can be overcome.

Rosen Jacobson underlined that MFAs need data scientists to analyse big data and this cannot been avoided. In addition to developing in-house capacities, MFAs could collaborate with universities, hire experts, or partner with the private sector. Höne expressed a concern that a digital divide could arise between MFAs with additional resources to invest in big data analysis and MFAs without them. To that extent, partnerships between countries and ministries would help bridge capacity gaps in big data analysis.

Rosen Jacobson concluded that if we are entering the Big Data Era, defined by a massive generation of data, it will eventually lead MFAs to adapt to the new possibilities. This should be done in a responsible and sustainable way. The report provides suggestion for how this can be achieved. Beyond that, new questions are opening up (such as the interplay between big data, diplomacy and artificial intelligence). Diplomacy always adapts to its surroundings in order to pursue its objective of better foreign policy and it shall do so in the Big Data Era as well.

Download the report Data Diplomacy: Updating Diplomacy to the Big Data Era and the Executive Summary.

The future of work: preparing for automation and the gig economy 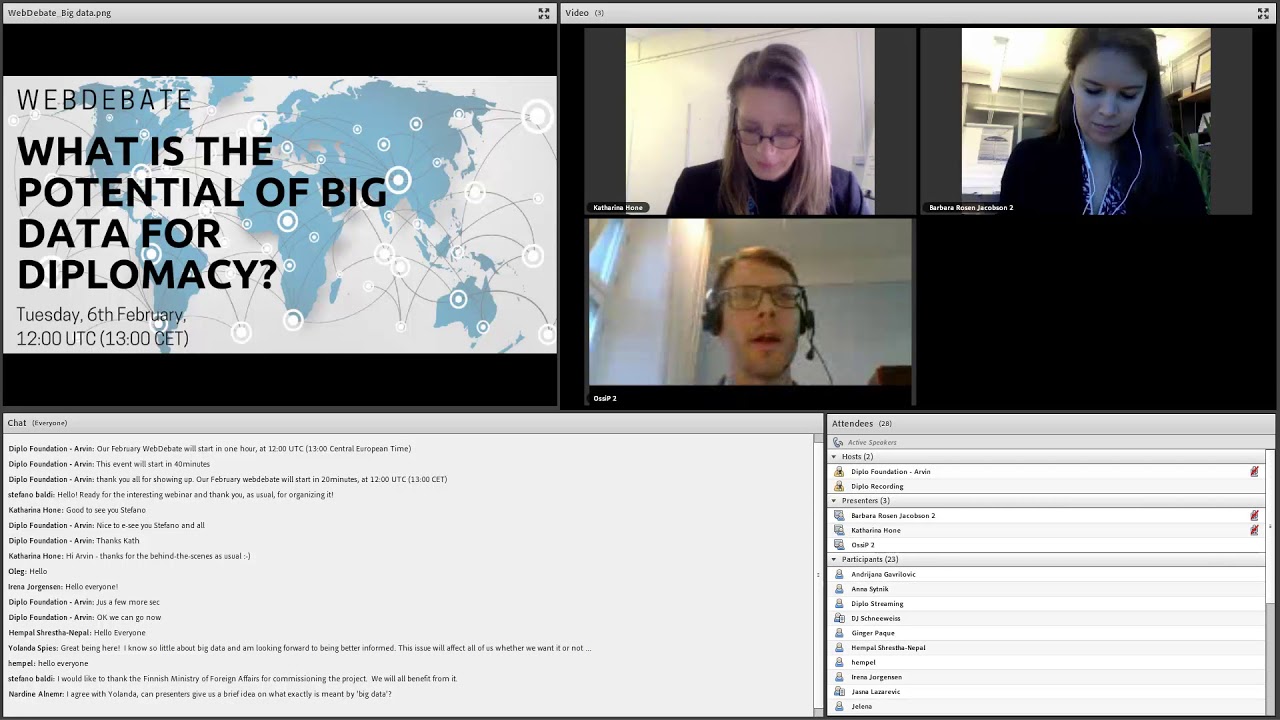