You are here: Home1 / [WebDebate #37 summary] Multilateral diplomacy in times of COVID-19

In our monthly WebDebate, which is organised in the context of the International Forum on Diplomatic Training (IFDT), we looked at Multilateral diplomacy in times of COVID-19. When we observe the responses to the COVID-19 crisis, we seem to encounter a paradox. On one hand, we have reports that shipments of masks and other key equipment are diverted from their destination countries. On the other hand, there are examples of enormous solidarity within societies and among countries. The work of the United Nations (UN) is clearly important in this crisis. The World Health Organization (WHO) has played a crucial part in responding to the crisis and UN Secretary-General António Guterres called for ‘a global ceasefire in all corners of the world’. He also launched a report on shared responsibility and global solidarity in response to the COVID-19 crisis.

Taking this as a starting point, in this debate we addressed:

Our speakers for this debate were Ambassador Umej Bhatia (Singapore’s permanent representative to the UN Office in Geneva), UN Undersecretary General Fabrizio Hochschild-Drummond (special adviser to the UN Secretary-General on the Preparations for the Commemoration of the United Nations’ 75th Anniversary) and Dr Owain Williams (senior research fellow in global health governance at the University of Leeds).

The need for multilateralism and solidarity

The UN system and multilateralism are facing a substantial challenge, yet for many small states multilateralism is a necessity, as Bhatia pointed out. The pandemic reminds us of our interconnectedness and therefore also demands for a global response. The harsh economic and development consequences of the crisis are substantial and this calls for greater solidarity between countries. However, while there are both worrying as well as hopeful signs, it is too early to tell how multilateralism will emerge from the crisis.

Bhatia also stressed that it is clear that we cannot return to the old way of doing things and that reform of multilateralism and reform of the UN are needed. Similarly, Hochschild argued that it is clear that we cannot go back to the status quo after the crisis. The status quo exacerbated the current situation through fragmented and disjointed approaches and the multilateral response to the next crisis needs to be better. Wiliams highlighted that the main impact of the crisis is about to be borne by the developing world, especially by those countries where public health and the public health systems are the weakest. This is another reason why solidarity and multilateral response are called for.

Looking more closely at the UN system, Guterres’s report ‘Shared responsibility, global solidarity’ is an important call for increasing co-operation. Another signal for solidarity is the resolution on ‘Global Solidarity to Fight COVID-19’ passed by the UN General Assembly. It was initiated by Indonesia, together with Ghana, Liechtenstein, Norway, Singapore, and Switzerland, and cosponsored by 188 countries.

These expressions of global solidarity also carry a challenge. Looking at the broader picture, Hochschild argued that the UN needs and can do better when it comes to global challenges such as climate change, migration, demographic changes, and growing inequalities. More specifically, the current crisis further underlines both the importance of the UN as well as the need for reform. Before the background of the tragedy of the Second World War, the UN has learned from the shortcomings of the League of Nations. Similarly, this crisis might help in galvanising new commitment and much needed reform.

Especially before the background of the 75th anniversary of the world organisation, it is crucial to further reflect on this. While the current crisis demands immediate responses, its implications are much larger. As part of the preparations for the 75th anniversary, Hochschild’s team is conducting a global listening exercise to get people’s perspectives on where the world is heading and how international co-operation and the UN can do better.

WHO and global health governance

Zooming in even further on the UN system, Williams stressed that the WHO has risen to the challenge of the crisis. However, a lack of funding for the WHO is a big challenge. Across global health governance, additional resources are needed to make a critical intervention. These resources have been lacking for decades. While this crisis is of an unprecedented scale, it comes on the back of a number of serious pandemics. Lessons from those crises were not implemented and the needed resources were not put in place.

The space of global health governance is also a crowded one, with many new institutions, including many private actors, having emerged over the last decades. First, this carries with it the danger of incoherent and un-lead responses. Second, experience has also shown that the market mechanism alone is not working when it comes to developing drugs and vaccines. Both points are challenges of multilateral diplomacy in the health sector and will need to be addressed if we are to learn from the current crisis.

From my perspective as the moderator, I was impressed by the frankness with which speakers pointed to serious challenges of the multilateral system. There was a general agreement that the current crisis has exposed long-term challenges of the UN and the need for reform. It is too early to tell how multilateral diplomacy and the UN system will emerge from the crisis. However, it is clear that, as Hochschild emphasised, the world needs to do better when the next pandemic hits. In order to move forward, Bhatia suggested to be guided by ‘the better angels of our nature’. Williams pointed out that we need to question what we really value and act accordingly. These points serve well for further reflections as we move forward.

During the debate, a number of resources were mentioned that are helpful in following up on the topic.

Who’s behind a cyberattack?

[Brussels e-briefings] The Eurozone ‘time bomb’: Can the single currency be rescued for good? 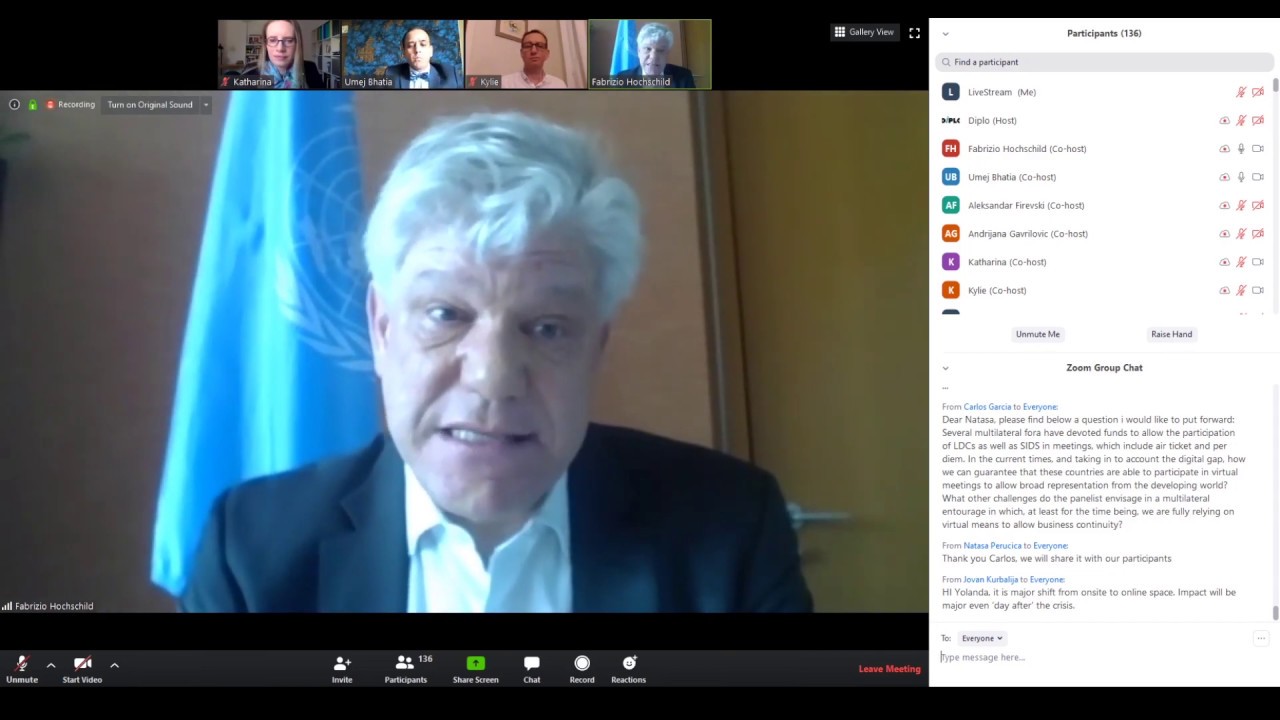 Studying with DiploFoundation has been quite a journey… and it’s not yet...Recalibrating our energy: Is all that glitters with digital technologies really...
Scroll to top