You are here: Home1 / “More inclusive and effective diplomacy is a necessity”

“More inclusive and effective diplomacy is a necessity”

‘Diplo’s work on making diplomacy more inclusive and effective is a necessity of our time. We need to engage the broader society in crucial discussions on the future of our world’, explained the Hon. Dr Marie-Louise Coleiro Preca during a meeting with the Friends of Diplo at Diplo’s office in Geneva. 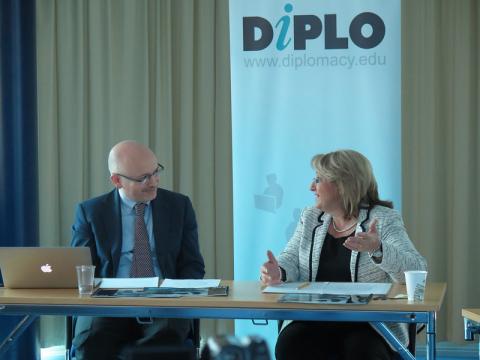 On 23/24 April 2014, Brazil will host the NETmundial meeting, aimed at establishing a new global arrangement for Internet governance. Diplo and Dr Kurbalija, as a member of the High Level Committee, are providing important policy input into the preparations for NETmundial.

The lively brainstorming with the ‘Friends of Diplo’ in Geneva was initiated by Swiss ambassador to the UN Alexandre Fasel who highlighted the importance of DiploFoundation as a joint initiative by Switzerland and Malta in assisting small and developing countries to participate actively in global multilateral diplomacy.

Honorary Professor Andre Liebich from the Graduate Institute in Geneva described the Maison de la paix  as a centre of  academic and research excellence aimed at supporting global governance and diplomacy in Geneva and engaging institutions worldwide. Maltese institutions, researchers, and students should take active participation in the activities at the Maison de la Paix.

Montenegrin ambassador Ljubiša Perović focused on the specificities of small European states and the very useful lessons that his country can draw from Malta. DiploFoundation has provided training to Montenegro in the field of e-diplomacy and Internet governance.

Ambassador Petru Dumitriu from the Council of Europe focused on the high relevance of Internet governance, and the unique role that his organisation plays in issue areas such as data protection, cybersecurity, and online human rights.

Robert Kaufman from the International Federation of Red Cross and Red Crescent (IFRC) described the growth of the Humanitarian Diplomacy diploma course jointly developed by the IFRC and Diplo. It started as a small project and has evolved into a major programme, with plans to deliver the course in French and Spanish, as well as English, in the near future; almost 150 participants have attended the course so far. Humanitarian diplomats, graduates of the course, are actively involved in humanitarian activities worldwide.

In her summary remarks, the President-Designate stressed that Diplo’s innovative and effective approach is particularly needed in regions such as northern Africa, which are facing turbulent times.  She concluded that Diplo is a unique asset, not only for Malta and Switzerland, but for all those who would like to see more peaceful and harmonious international relations.

Guest blog: Diplomats need to be able to talk to locals, not just leaders