You are here: Home1 / Gender and diplomatic training – towards better curricula and holistic a...

Gender and diplomatic training – towards better curricula and holistic approaches

Our WebDebate in November focused on the question: ‘What is needed for a curriculum on Gender and Diplomacy in diplomatic training academies?’ The debate produced the first building blocs for a curriculum and pilot training in gender and diplomacy.

Gender equality is undeniably important in diplomacy. The need for women’s political participation has been repeatedly emphasised, yet, despite all efforts and commitments, gender equality and gender equity remain issues of concern. For example, in International Geneva alone, women hold only one-third of the positions at permanent representations to the UN. Furthermore, only 22% of the heads of missions in Geneva are women (research from the International Gender Champions (IGC) and DiploFoundation’s Geneva Gender Map).

The WebDebate was inspired by the International Gender Champions Geneva (IGC) initiative which was eloquently introduced by a video message from the IGC’s initiators: US Ambassador Pamela Hamamoto and Director-General of the United Nations Office in Geneva, Michael Møller. Diplo belonged to the first members of the initiative. The webinar was led by guest speaker Dr Susan Harris-Rimmer, Associate Professor at Griffith Law School and adjunct reader in the Asia-Pacific College of Diplomacy.

In doing so, she stressed that if we want to include gender in diplomatic curricula, we need to take a broad and long-term perspective, which should encompass the strategic vision of the MfA, foreign policy, and diplomatic reporting.

Advances in regions and countries – role models and early adopters

The online participants shared several examples of gender equality commitments and gender equity programmes from Afghanistan, Argentina, Namibia, and Somalia. This gave us the opportunity to reflect on the kinds of advances that have been made in various regions and countries.

Reflecting on these examples, Dr Harris-Rimmer observed that developing countries are on a good track and she emphasised that there is no reason why they could not actually outpace developed countries in the future.

She also pointed out that, already in the 1920s and 1930s, Latin America was a great innovator in gender and diplomacy. Some of the Soviet states, with their official ideology of supporting women in public services, were doing well in terms of gender equality in diplomatic postings. For example, the first female career ambassador was Russian. Currently, most progress among regional organisations  has been made by the African Union. In terms of individual countries, the Nordic countries deserve a special mention. We should also not forget the impact of women serving in high-level diplomatic positions in an influential country like the USA (Secretaries of State Madeleine Albright, Condoleezza Rice, and Hilary Clinton come to mind).

Progress made on gender equality – reasons for optimism and pessimism

Dr Harris-Rimmer argued: ‘If your world is run by data, you should be pessimistic.’ She cited recent EU and World Bank reports that suggest a decline in gender equality. This indicates that progress is reversible and efforts towards gender balance need to continue. Data are important in order to see what is actually happening. While there is reason for some pessimism, some regions give cause for optimism. Latin America and the African Union show continued progress in gender equality. It is also important to keep in mind that gender diversity in diplomacy is a great enhancer of women’s status in society. Therefore, increasing the role of women in diplomacy benefits society as a whole.

Dr Harris-Rimmer pointed out that some diplomatic topics already encompass a gender-perspective, such as multilateral diplomacy in human rights, development cooperation, and activities linked to the 2000 UN Security Council Resolution on Women, Peace, and Security (1325). Yet other areas, such as trade and economic diplomacy, intelligence and security, and peace negotiation and mediation lack gender balance and are dominated by male diplomats. Crisis diplomacy also tends to be male dominated. For example, until recently there were no high-level female mediators and special envoys at the UN, despite the close correlation between women’s movements and peace movements. We can also observe a tendency that ‘the higher the status the lower the women’, which means that positions with high-stakes and/or prestige have fewer women in place.

Towards better diplomatic reporting by including gender

Without attention to gender, traditional diplomatic analysis is limited and narrow and therefore runs the danger of missing some crucial events and trends. Understanding social constructions of masculinity and femininity is key to understanding societies. Diplomacy cannot afford to focus only on an analysis of a country’s leaders. It also needs to take a demographic and gender perspective on board.

Questioning notions of masculinity and femininity and overcoming binaries

Webinar participants raised concerns about the binary treatment of gender and asked about transgender issues. Dr Harris-Rimmer emphasised that we need to understand gender as a social construction and as performative. We need to overcome the use of binaries (male vs female) in the conversation. Gender is a complex issue and analysing these complexities draws on the same analytical prowess that is used to analyse the war in Syria. However, what is still missing from many conversations is the recognition that gender is a valid topic and that it is an important issue for foreign policy.

A systematic, integrated, and long-term approach to gender in diplomatic curricula

Diplomatic academies currently do not go deep enough in their discussion and training on gender. In part, there are resource- and time-constraints at play. Ideally, the curriculum would leave space for reflections on the ideal characteristics of a diplomat and how such characteristic might already include a gender bias. The training would be more thoughtful regarding gender roles in MfAs, as well the history and future objectives of the MfA. In addition, more data is needed and more research on gender in key foreign policy journals. Such changes matter greatly for the conduct of diplomacy; they will improve the quality of diplomatic reporting, lead to better decisions, and help avoid embarrassing protocol mistakes.

In connection with the WebDebate, Diplo undertook a small survey to better understand what is needed for a curriculum on diplomacy and gender. You can find an overview of the results here.

The WebDebates on the future of diplomacy are organised by DiploFoundation within the framework of the International Forum on Diplomatic Training (IFDT), which gathers close to 100 diplomatic training institutions worldwide. Join us on the first Tuesday of each month.

September: The start of the diplomatic year

New Alumni Hub: supporting the work of our Alumni

The opportunity costs of an arms race 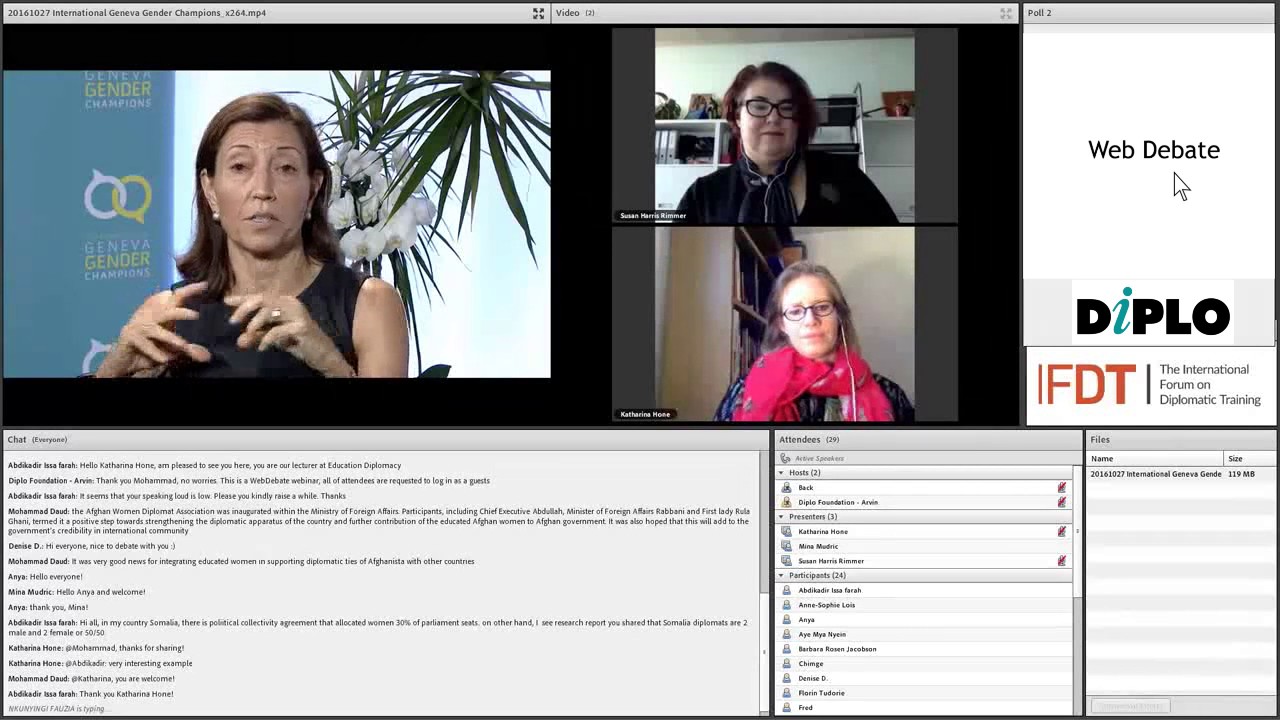 Will digital diplomacy ‘select’ the next US president?25 Points for Digital Diplomacy
Scroll to top