You are here: Home1 / ASEAN’s multilateral diplomacy answer to COVID-19

As COVID-19 spreads across the globe, South East Asia has become a particularly affected region, numbering, by 2 June 2020, more than 90 000 COVID-19 cases and 2000 deaths. As a region characterised by the deep interdependence of its countries, with substantial daily flows of people across borders, the Association of Southeast Asian Nations (ASEAN) has argued that a concerted answer to the challenges posed by the global pandemic is essential.

ASEAN has been playing a pivotal role in co-ordinating the regional answer to COVID-19 through a series of multilateral diplomatic initiatives, making use of its complex institutional network. ASEAN has tried to nurture the ASEAN-Way approach for which it is known, striking a balance between national initiatives on the part of its member states, while encouraging regional co-operation that emphasises ‘ASEAN centrality’ as the ‘basis for cooperation within the region’.

On 19 February 2020, before the World Health Organization (WHO) declared COVID-19 a pandemic, ASEAN defence ministers met at their retreat in Hanoi, Vietnam, where they issued a Joint Statement, making a commitment to promote co-operation amongst ASEAN defence establishments, especially in the fields of military medicine and sharing information relevant to combating disease outbreaks.

After the WHO declared the pandemic on 11 March, ASEAN convened an ASEAN Plus Three (APT) video conference with ASEAN’s health ministers and representatives from China, Japan, and South Korea, where a shared commitment was made to enhance ‘free, open, transparent and timely sharing of information, data and expertise on COVID-19 prevention, detection, control and response measures’, as well as to increase the ‘coordination to share information on rapid research and development of diagnostics, antiviral medicines and vaccines’. 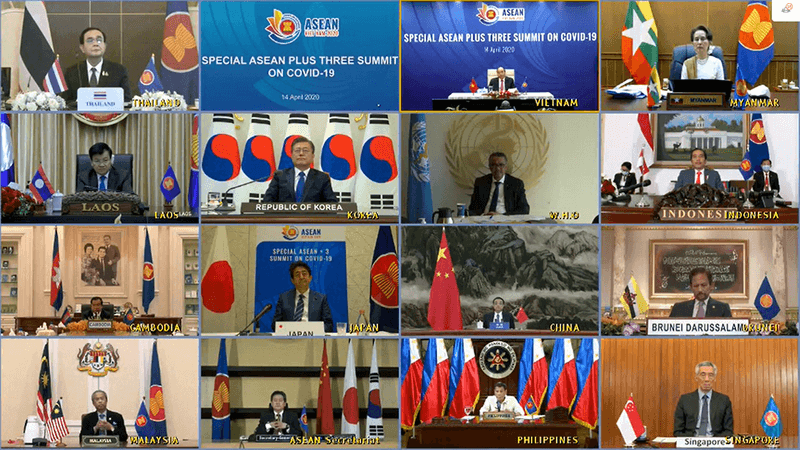 These commitments were further reinforced at the Special ASEAN Summit on Coronavirus Disease 2019 that took place on 14 April via video conference, where the centrality of ASEAN’s emergency response network for the novel Coronavirus was additionally underlined.

The network involves a series of institutions such as the ASEAN Emergency Operations Centre, the ASEAN Risk Assessment and Risk Communication Centre, the ASEAN BioDiaspora Virtual Centre (which is now responsible for compiling statistics on the development of the pandemic in the region), and the ASEAN Centre for Humanitarian Assistance and Disaster Management. These institutions have been placed at the forefront of co-ordinating technical and political efforts to contain and fight the pandemic in South East Asia.

The Special Summit further underlined the importance of co-operation with ASEAN’s external partners, namely via the utilisation of the APT Emergency Rice Reserve to ensure food security in the region, with a view to reinforce the ‘resilience and sustainability of regional supply chains of food, commodities, medicines, medical and other essential supplies’.

Finally, the Special Summit sought to establish a foundation for the post-pandemic period by encouraging the development of a post-pandemic recovery plan that allows the sharing of lessons-learned between member states, and restoring ‘ASEAN’s connectivity’, namely in the fields of tourism, business, and social activities. 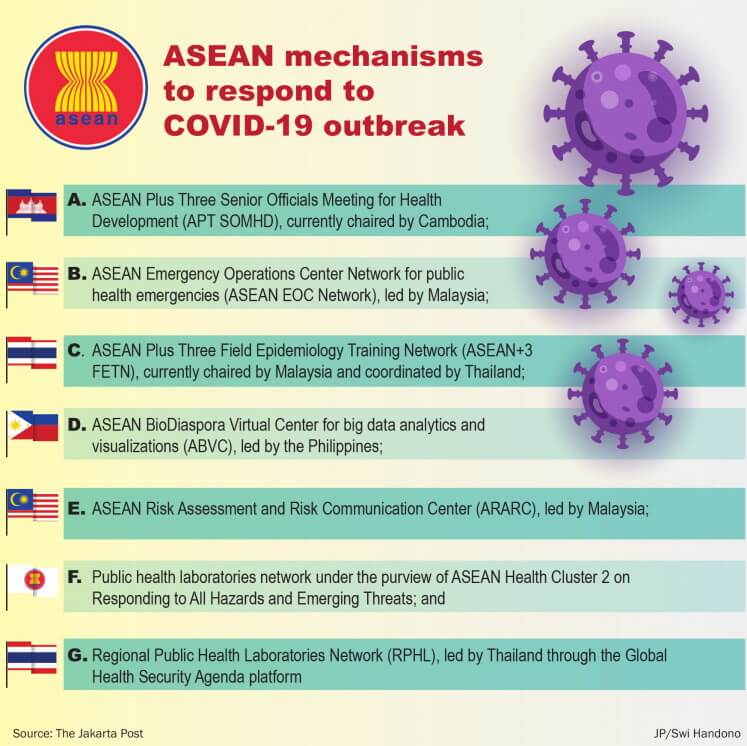 ASEAN’s efforts at multilateral diplomacy as the preferred avenue for tackling COVID-19 extend beyond the immediate Asian region, as is evidenced by the organisation’s efforts to reinforce co-ordination with both the United States and the European Union. Hence, on 30 March, the ASEAN-EU Ministerial Video Conference on COVID-19 took place, and was chaired by Singapore’s Minister for Foreign Affairs and current co-ordinator of the ASEAN-EU Dialogue Partnership Vivian Balakrishnan, Senior Minister of State for Health and Transport of Singapore Lam Pin Min, High Representative for Foreign Affairs and Security Policy and Vice President of the European Commission Josep Borrell, and European Commissioner for Crisis Management Janez Lenarčič.

The joint statement of the Ministerial Conference’s members emphasised the importance of ASEAN-EU co-operation in two main fields. First, in the definition of a clear criteria on when and how to impose time-limited travel restrictions between the two regions as a way to contain the spread of COVID-19 (especially in the potential scenario of the long-term existence of the virus). Second, it emphasised the need to ‘double-down’ on the co-operation between the two regions, especially in the fields of trade and investment, as to nurture the return to the ‘spirit of openness’ on which the future recovery of European and South East Asian economies and livelihoods depends.

Parallel efforts have also been developed in the context of ASEAN-US relations through the Special ASEAN-United States Foreign Ministers’ Meeting on Corona Virus Disease 2019 that was chaired by Minister of Foreign Affairs of the Lao PDR Saleumxay Kommasith and US Secretary of State Michael Pompeo.

The joint statement, beyond a commitment to further co-operation and information sharing, emphasised the need to reinforce existing structures of co-operation in the area of health between ASEAN and the USA, such as the US-ASEAN Health Futures Initiative, directed towards the training of health professionals and the development of healthcare systems in the ASEAN region.

The mechanism of USAID’s alliance with Vietnam titled ‘Improving Access, Curriculum and Teaching in Medical Education and Emerging Diseases’ (IMPACT-MED), which is oriented towards strengthening and expanding Vietnam’s COVID-19 infectious control protocols, was highlighted as an example of good practices that could be emulated elsewhere in the region.

ASEAN’s robust efforts at multilateral diplomacy, as the preferred approach to tackling COVID-19, can be seen as going against recent tendencies towards growing isolationism and suspicion towards multilateral frameworks by some global players.

This has led analysts such as Rifki Dermawan to argue that ASEAN’s way of tackling COVID-19 ‘symbolizes the power of multilateralism […] as a solution to global problems’. It represents a belief that transborder challenges, such as infectious diseases, require multilateral diplomatic co-operation on penalty of becoming unmanageable in ways that could entail severe costs in terms of human lives and long-term economic effects. However, it has also been noted that ASEAN’s answer to COVID-19 follows an already-tested approach of quickly organising emergency multilateral meetings to deal with non-traditional security emergencies, a similar pattern witnessed in 2003 during the severe acute respiratory syndrome (SARS) epidemic.

As underlined by Sankari Sundararanam, the real challenge lies in legislating the co-ordination and information-sharing commitments that were developed in these special meetings into concrete policies. It also requires an understanding of if and how multilateral diplomacy dynamics, practised for non-traditional security crises (such as SARS and COVID-19), can be treated more like traditional security threats (such as the South China Sea issues that continue to threaten regional peace and security).

Dr André Saramago is an assistant professor of International Relations at the University of Coimbra (Portugal) and collaborates with DiploFoundation in online teaching and research as a guest contributor to the courses Multilateral Diplomacy and Asia-Europe Public Diplomacy, run in co-operation with the Asia–Europe Foundation (ASEF). Saramago’s research focuses on international relations theory, international historical sociology, and East Asian studies. Recent publications include ‘Singapore’s use of education as a soft power tool in Arctic Cooperation’ (Asian Survey Journal 58(5)) and ‘Reality-congruence, emancipatory politics and situated knowledge in International Relations: A process sociological perspective’ (International Relations Journal 34(2)).

Diplomacy in times of COVID-19

[Summary] RightOn #6: From crisis to opportunity: How to build back better?

[Summary] RightOn #9: Access to Information and the safety journalists in times...Can autonomous vehicles be the heroes of the COVID-19 pandemic?
Scroll to top