You are here: Home1 / Unveiling a new design concept for Geneva Engage

On 8 February 2017, the Geneva Engage Awards recognised the outstanding efforts of Geneva-based organisations in social media engagement during last year. The awards, now an annual event, form part of the Geneva Engage initiative. On the occasion of this year’s awards, we unveiled a new design concept for Geneva Engage.

The concept is simple, and aims to illustrate the initiative’s aim of fostering links between International Geneva and the rest of the world. What led DiploFoundation’s creative designer and illustrator – Prof. Vladimir Veljasevic – to create such an eye-catching design? We caught up with him for a chat.

Q. What is the concept behind the design?

Prof. Veljasevic: The concept is simple: the hand is one of the oldest and most widely used communication symbols, from the Neolithic period to the present. Its function can be changed, depending on people’s needs. Initially it was a print on the wall – a signature. Later on it became a symbol with multiple meanings, for example a person or group of people using a hand gesture to communicate an intent or action.

What’s more, depending on the culture in which the symbol is used, a hand has both positive and negative connotations. In Europe the right hand is perceived as ‘good’ – symbolising positive intentions and actions. The most famous example is ‘The Creation of Adam’ in the Sistine Chapel, in which the right hand represents the divine and spiritual, while the left hand represents the mundane and profane.

For this poster I used two right hands – an unambiguously positive image – a hand that gives and a hand that receives. 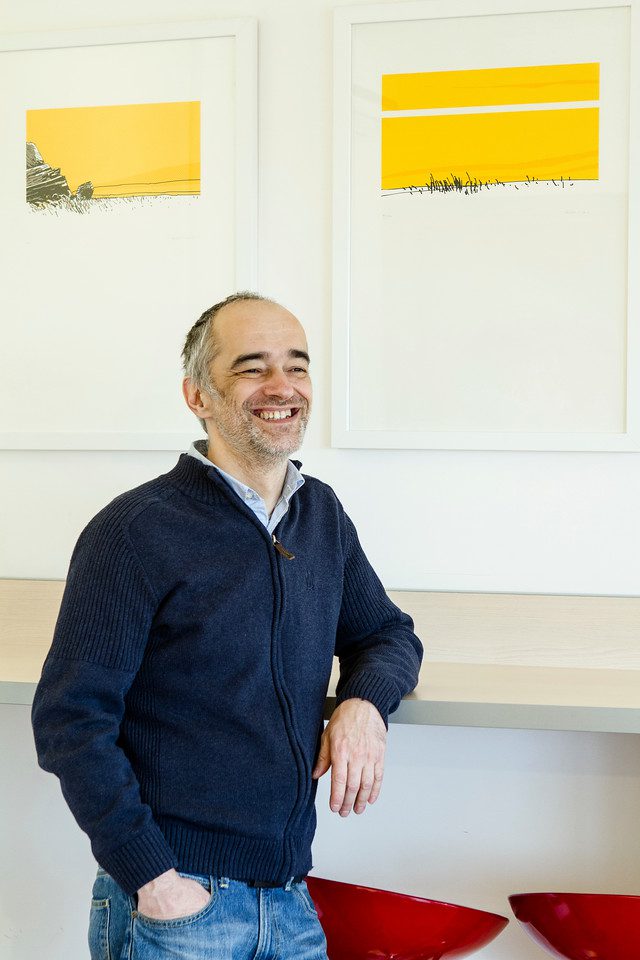 Q. What inspired you, and what other elements did you keep in mind while you were developing the design?

Prof. Veljasevic: The most important thing in designing works in the graphic communications field, is to keep in mind that the idea must be simple and comprehensible from the start and to visually reduce it to an even simpler form during the design process – down to a single character or symbol if possible. At the same time it must remain easy to understand and recognise.

This implies that the artistic intervention must be subordinated to the communication function of an idea to a satisfactory level. The idea is then aesthetically and technically processed in a visually balanced manner as to be acceptable in regard to its function. The initial impulse starts from the need to convey a message by a drawing or a combination of drawing and text aiming for a clear and legible final visual display.

Q. In your view, what is the function of art, and how does it interact with cultural and social elements?

Prof. Veljasevic: The function of art is not to illustrate but to refine a banal action and to give it a higher meaning by conveying a clear and accessible message. At the same time, art must be adapted to the visual culture of its beholders in order to enable them to understand it. At this point parameters such as the cultural and social basis of the targeted society or group, comprehensible symbols, recognisable colours, intentions and goals are considered and applied. If all these elements are well balanced, then such a visual display meets its main function. Another, perhaps more important function, is that the image is aestheticised to the extent that it becomes independent from the message it bears and can be viewed as an autonomous work of art. Then we have the right combination of function and art and we can say that we have an autonomous work of art regardless of techniques and the purpose for which it was created.

Geneva Engage is an initiative of DiploFoundation and the Geneva Internet Platform aimed at fostering effective links between International Geneva and communities worldwide that are affected by the policies discussed and negotiated in Geneva.

Watch the recording of the 2017 Geneva Engage Awards, and follow the updates on the initiative.

[WebDebate #4 summary] Can diplomacy be learned on-the-job only?

The Psychology of Diplomacy