You are here: Home1 / Bright future for diplomacy and need for changes in diplomatic service...

The end of diplomacy has been pronounced many times in history. In 1850, when Lord Palmerston received the first telegraph, he exclaimed: ‘My God, this is the end of diplomacy!’ Diplomacy survived not only the invention of the telegraph but also the telephone and radio eras. Is the Internet era any different? Is the diplomatic service still needed? These were the underlying questions in the first of a new series of WebDebates. 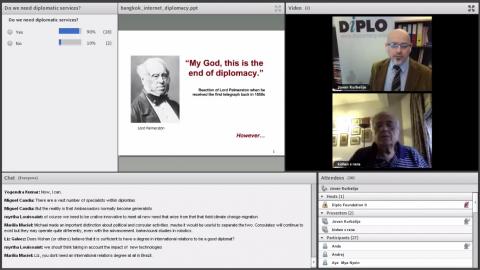 Is the discussion about the irrelevance of diplomats, or of diplomacy?

This key distinction emerged during the discussion. Diplomacy is here to stay, and moreover, it will grow in importance in the interdependent world. The future of diplomats and diplomatic services is less certain. They will have more and more competition in practising diplomacy by non-governmental actors, journalists, and the business sector, to name a few. (Watch the discussion) 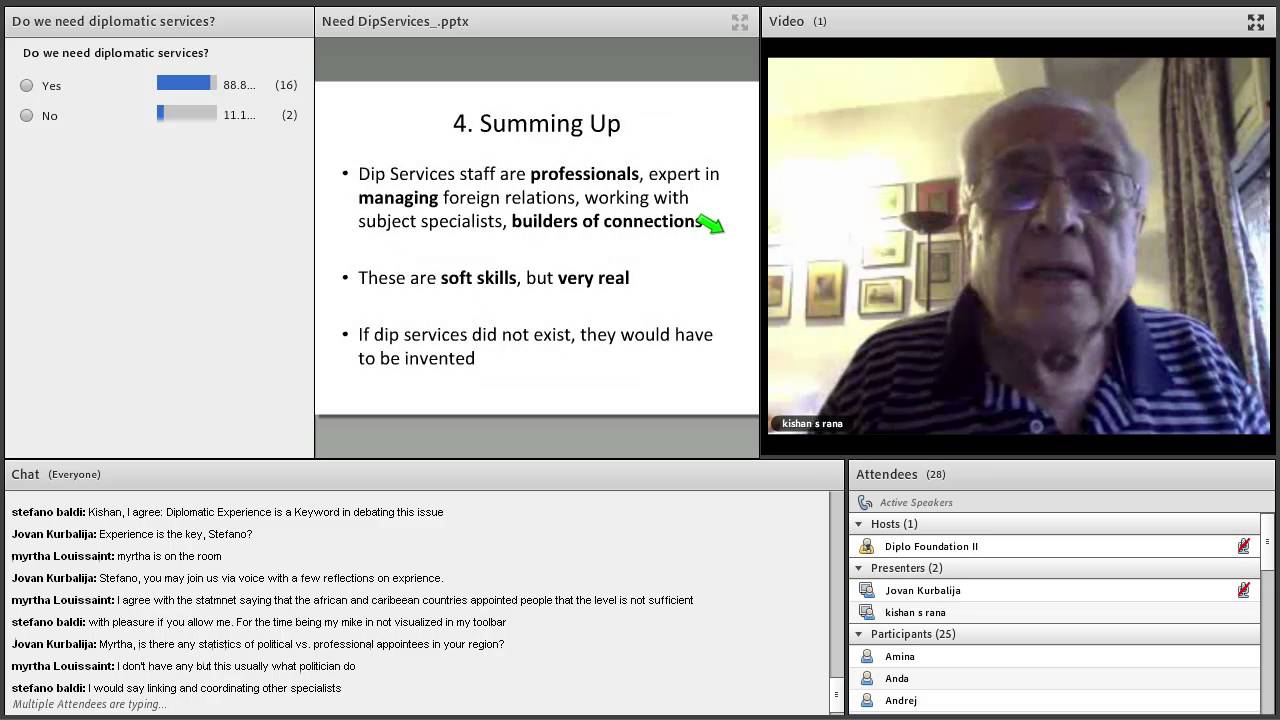 Is diplomacy actually a profession?

‘Yes, it is’ was the immediate and instinctive answer by many discussants (disclaimer – participants were diplomats or researchers in diplomacy). Unanimity was challenged by the next question…

What is so unique for diplomats that cannot be done by other professions?

The answer to this simple question triggered a flow of metaphors.

Connecting the dots was the first metaphor used to describe the diplomats’ unique skill in correctly combining a broad and general view of a country’s interest with specialised knowledge. This function of a diplomat was described as ‘expert generalist’.

Conductor in an orchestra was the second metaphor. Orchestra conductors have in-depth knowledge about the different instruments of the orchestra, but are rarely virtuosos of every instrument. Diplomats have to ‘shape the music’ from various ‘instruments’, including ministries, the business sector, and non-governmental organisations. In order to be a good conductor, a diplomat needs skills for negotiations and intercultural management.

Solving a Jigsaw puzzle was another metaphor used to describe the diplomats’ need to deal with complexity. One of the questions raised by the online audience was, ‘What are the functions that can only be performed by professional diplomats?’. In Ambassador Rana’s view, it is that of making connections between these varied issues. They fine-tune as they understand the larger picture – they can see where the bits and pieces fit together, like a jigsaw. (Watch the discussion)

Not necessarily. It is erroneous to think that the study of international affairs is the only way to a diplomatic career. The sector needs people who have studied economics, law, social affairs or sciences, and the diplomatic profession offers enough potential for people with diverse academic knowledge. A wide academic background is a clear tendency in recruitment for diplomatic services.

Is the plurality of information sources making embassies less relevant than before?

At first glance, this could be the case. However, substantially it is not. We are witnessing the renaissance of bilateral diplomacy where the only entity that has a complete picture is the embassy on the ground. The recommendations made by the embassies are accepted by the Foreign offices because they have a better understanding of the situation in the country of assignment. The embassy has become the core manager of bilateral relationships, and it rises in value. The embassy takes on the bigger responsibility, and is therefore required to understand and advise on the basis of national policy. (Watch the discussion)

Can embassies compete with journalists and the online media in providing information?

Yes, they can – and they do. Information is available, but the skills for interpreting such information is quite rare. The embassies have an advantage over journalists and others. They can select and contextualise information from the point of view – or perspective – of national objectives, priorities, and compulsions. This cannot be easily carried out by journalists and online commentators. The same policy issues are seen differently from a national angle; politics is local and national, and issues are global. That is why we need embassies: to pick up the local vibes at the capital where they are posted. (Watch the discussion)

Do strict hierarchies in the diplomatic service reduce its chances to adapt and survive?

Yes, exceedingly hierarchical systems, such as diplomatic services, have limited flexibility to adapt to a fast changing world.

In some regions, such as Latin America, hierarchies are very strong. Scandinavian countries are trying to find some flexible solutions: for example, junior diplomats can become team coordinators, while senior diplomats have no problem in working in such a structure. This is how junior diplomats learn how to manage a group.

The underlying message of the first WebDebate is that we will need more diplomacy, negotiations, and compromise in order to manage an increasingly interdependent world. However, diplomatic services will need to adapt in order to remain relevant.

Join us for the next WebDebates, which will discuss various aspects of changes in diplomacy:

The WebDebates on the future of diplomacy are organised by DiploFoundation within the framework of the International Forum on Diplomatic Training (IFDT), which gathers close to 100 diplomatic training institutions worldwide. Learn more about our series of WebDebates.

WebDebates (new series): Discussions on the future of diplomacyDiplo conducts e-diplomacy training in Saint Kitts and Nevis
Scroll to top