You are here: Home1 / [WebDebate #21 summary] Can we teach and learn negotiation skills onli...

[WebDebate #21 summary] Can we teach and learn negotiation skills online?

In our May WebDebate, we looked at the potential of teaching and learning negotiation skills online. Joining us to to consider this possibility were Ambassador Kishan S. Rana, professor emeritus and DiploFoundation senior fellow; Ambassador Stefano Baldi, Ambassador of Italy to Bulgaria; and Dr Katharina Höne, research associate in diplomacy and global governance at DiploFoundation.

The importance of simulations when teaching negotiation

Höne questioned what can be learned in the abstract and what can only be learned through practice ‒ whether only the ‘theory of negotiation’ can be taught online and whether online courses are limited to passive instruction. An important part of online courses on negotiation are simulations of negotiations and Höne, a lecturer on DiploFoundation’s Negotiation Skills online course, described the two-week simulation exercise her students undergo. The students simulate the pre-negotiation phase of a development project with representatives from both governments and civil society of the partner country, in the lead-up to the first face-to-face meeting. More than 90% of students agreed or strongly agreed that the negotiation exercise was an important part of the learning experience saying it consolidated the learning and called for creative application of the topics discussed in the course. However, as Höne reflected, online teaching is different in some aspects. Challenges include the absence of human connection and human touch and non-verbal clues, as well as differences in conveying emotions and differences in creating connection and applying pressure. Advantages of online teaching are increased access and availability of negotiation training, the potential for more equal participation, and the ability to slow it down and analyse the situation carefully before responding. At the end of her presentation, Höne argued that there is likely an increased need for online training in negotiation skills as more and more negotiations are taking place online and diplomats have less time to attend face-to-face training.

In Rana’s experience, online learning is slower and delivered over a longer period of time, unlike face-to-face lectures. Simulations are very important in negotiation training, yet Rana is uncertain whether they are effective online. Experiences of other institutions could be quite valuable in this regard, which is why he recommended horizontal co-operation between institutions that use online learning. The key point for Rana is that advocacy, trust, and credibility remain at the core of diplomacy. Despite the rise of public diplomacy and the revolution in information technology, the classic tasks of relationship building and bilateral management remain unchanged.

Baldi highlighted that there are critical limitations to online learning for negotiation skills. In his experience, the most effective simulations can only take place live, with people in a meeting room, simulating. What can be simulated well in an online training course is online negotiation. However, negotiations rarely take place online. In order to develop this possibility, which can be quite effective for certain types of negotiation, diplomats and others should be more aware and knowledgeable of the tools that can be used  so they would feel more at ease to shift some of the negotiations, but not all of them, online.

Höne reflected that even if online teaching courses were limited to simulating only online negotiations, any negotiation simulation exercise holds valuable lessons for participants, even if they are just related to self-reflection: experiencing oneself in the face of adversity or failing to get concessions. These lessons are to a certain extent generalisable and transferable, and they still provide participants with the experience of simulating negotiation exercises.

Höne pointed out that some of the participants at DiploFoundation’s courses seem to suggest that more and more aspects of negotiations are moving online, counting for example e-mail exchanges used to agree on small matters before a face-to-face meeting.

Can procedures be better simulated online?

Rana admitted that the procedural elements of multilateral processes are more easily amenable to online teaching methods. However, he cautioned that countries with limited resources tend to view online processes differently than countries that are more advanced in the application of ICT. In bilateral processes, Rana was unaware of any substantial work done between negotiating countries.

Baldi pointed out that procedures can certainly be simulated and it is useful to know them. Yet, rules of procedures are very specific to each organisation and, as such, the potential for teaching generalisable lessons is limited. Therefore, online courses on negotiations should only cover basic procedures, such as the role of the chairman, the vote order, etc.

Is online negotiation, even at a preliminary level, taking place to a significant degree in the EU?

Can relationships be built in an online context?

Rana stated that he is unaware of any such examples, but said that such an outcome would be wonderful. Baldi noted that building relationships is essential in some types of negotiations. For example, in Brussels, where diplomats from EU member states are posted for four-year periods, building relationships is of massive importance. He concluded that many links can be established online, even if it is more difficult to establish them. He also noted that relationships can be built during online courses on negotiation, if the courses are delivered over a long period of time and are interactive in nature.

Drawing on her experience as a lecturer at DiploFoundation, Höne further stressed that substantial relationships can be built online. Participants feel like they know each other, and they do to a certain extent, which forms a relationship that can be deepened during face-to-face meetings.

Does online negotiation build skills and practices, especially for newcomers?

Rana briefly and emphatically stated that they do. Baldi stated his belief that everybody should attend an online course before participating in a face-to-face course or simulation. It would save them valuable time while providing them with a certain level of knowledge they can build on.

Höneconcluded by stressing that in her experience online training can simulate some key aspects of negotiations, including giving and receiving concessions, self-reflection, and managing one’s emotions. Rana concluded that hard data on what is happening online is needed. It would be beneficial to know, for instance, the percentage of negotiations that are occuring online. He reiterated that those who teach negotiation online need to communicate horizontally. Baldi concluded that regardless of the amount of negotiations taking place online, it is essential that professionals have negotiation skills, even if they are not diplomats. Online courses are an exceptional tool for teaching these skills, provided that they contain certain characteristics: that they are provided over a long period of time, that they build relationships, and that they simulate negotiations.

The medium and how it can colour the message 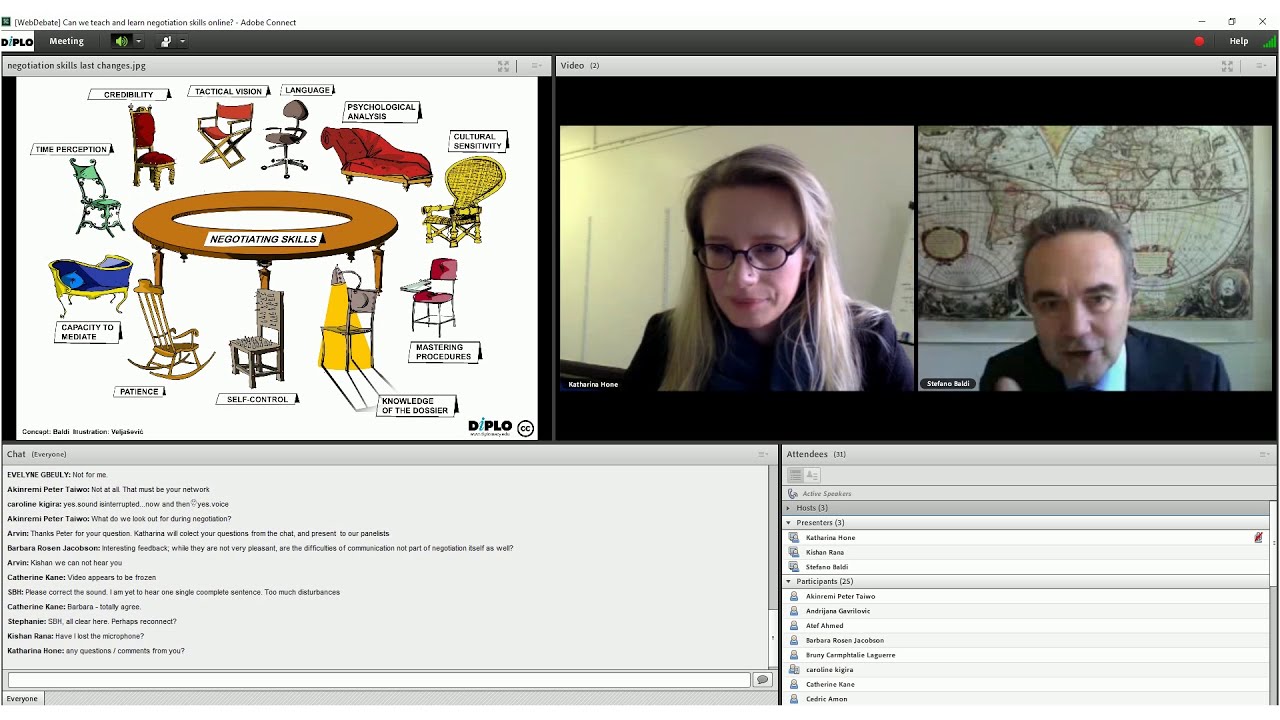