You are here: Home1 / Persuasion, the essence of diplomacy (report from the event)

Persuasion, the essence of diplomacy (report from the event)

The book Persuasion, the essence of diplomacy was presented to Prof. Dietrich Kappeler during a seminar organised in Geneva on 3 April 2013 by DiploFoundation and the Mediterranean Academy of Diplomatic Studies. In a lively debate, academics, diplomats, and journalists discussed the theoretical, practical, and historical aspects of persuasion. 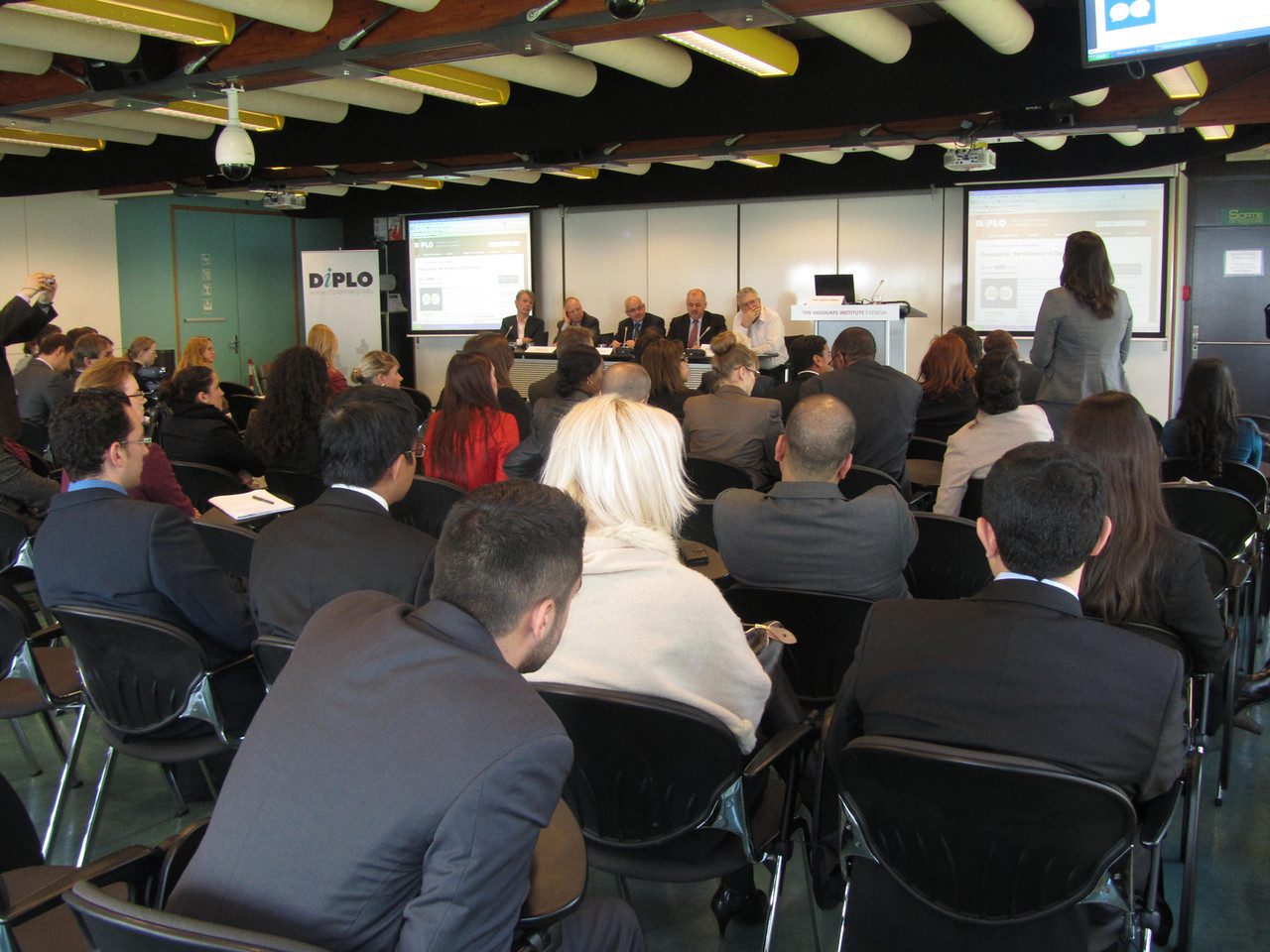 ‘Persuasion is much more than the rhetoric it is often associated with. It defines us as humans. It is an essential part of our social fabric’, stressed Dr Jovan Kurbalija, editor of the book Persuasion, the essence of diplomacy. According to the latest studies, we spend half our time persuading or being persuaded.  It happens in our family, at work, in pubs. We try to persuade verbally, tacitly, and increasingly online.

The seminar discussion centred on two arguments about persuasion: persuasion as an individual skill based on oratory and personal relations, and persuasion as a matter of social context.

Ambassador Francois Nordmann, a former Swiss diplomat, highlighted the human aspects of persuasion. He recalled a few decisive moments from his long career when humour and a human touch facilitated breakthroughs in a negotiations stalemate. Persuasion cannot bridge strong political differences, but it can smooth negotiations and overcome misunderstandings. In many cases, this type of persuasion can make a major difference. In multilateral negotiations, Ambassador Nordmann highlighted the increasing relevance of persuasion on the same side of the ‘negotiation table’. While doctors and scientists communicate easily across the table, they may often have challenges in persuading their member of national delegations.

Ambassador Petru Dumitriu, from the Council of Europe, discussed the changing nature of persuasion in multilateral fora.  The increasing formalisation of multilateral negotiations leaves less and less space for individual persuasion. Delegations come to multilateral meetings with clearly defined policy positions and little room to manoeuvre. Multilateral negotiations are often shaped within the regional groups, leaving much less substantive persuasion for plenary meetings.  He highlighted the increasing importance of the time-factor in multilateral negotiations that could – sometimes – lead towards a paradoxical situation: ‘A successful speech is a short speech. The chairperson will usually praise the short intervention rather than the smart ones. Even if diplomats manage to squeeze a persuasive speech into 2–5 minutes, the audience is often missing.’ (see: background article)

Dr Aldo Matteucci argued that persuasion is more a matter of social context than pure rhetoric: ‘Persuasion is an important enabler of social change. Social media is an example where persuasion evolves from individual agency to collective change.’ We have a very limited possibility to control social dynamics. What we try to push strongly today may work against us, in a different social context, tomorrow. Diplomats should be aware of this limitation and do what they can do: be part of the process and guide it from within whenever possible (not that often) – thus becoming accomplices to destiny. (see: background article) 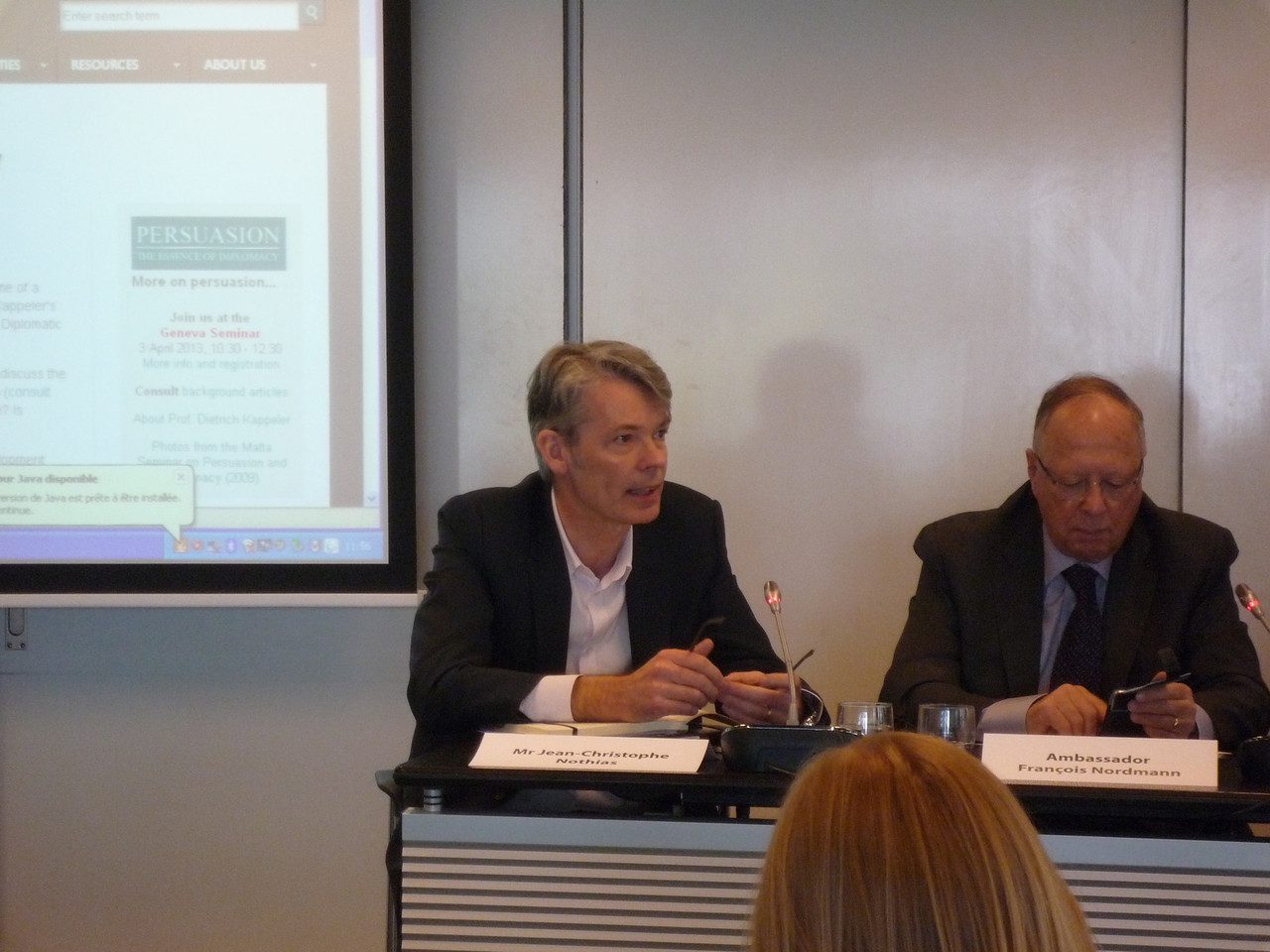 Mr Jean-Christophe Nothias from the Global Journal presented a journalist’s perspective of diplomatic persuasion – when and how diplomats can persuade media. He highlighted the high importance of the current negotiations going on in Geneva: trade (WTO), health (WHO), Internet (ITU, WIPO), and human rights. Although Geneva may look calm and tranquil, there is a lot of going on under the surface. Many of these issues are highly complex involving a multiplicity of skills and knowledge. In his view, persuasion – like negotiations in general – is becoming a matter of team work. Individuals, even with great persuasive talent, can do very little without a well organised team of diplomats and experts. 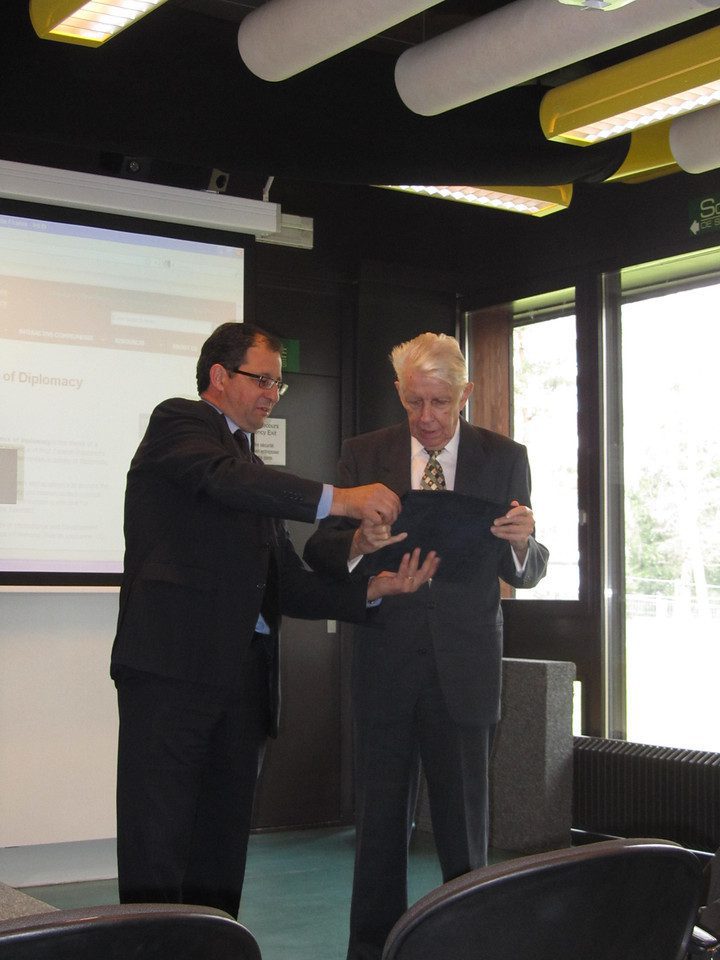 ing remarks, Professor Dietrich Kappeler highlighted the need to preserve the importance of the human touch in the era of the ‘technolisation’ of modern society. He quoted the Oslo negotiations as an example of how to create a persuasion-friendly context. The negotiations started with Israeli and Palestinian interlocutors spending a long weekend at the summer house of the Minister of Foreign Affairs of Norway together with his family. In this homely atmosphere they realised that they had more in common than they ever thought. It was the first step.

Professor Stephen Calleya, Director of the Mediterranean Academy of Diplomatic Studies, presented a special gift to Professor Dietrich Kappeler on the occasion of his 80th birthday.

Are international immunities of heads of state and government officials undergoing a major change?

Online learning: A hype that changes and improves reality

Standing the test of time

Colours in politics: when blue is greenWhen life is a business – 228
Scroll to top