You are here: Home1 / Diplomatic distancing

As more than 40 heads of state and dignitaries visited Paris on Sunday to show their solidarity with the people of France under the banner of anti-terrorism and freedom of speech, some in Budapest were wondering why Prime Minister Viktor Orbán had been invited.

Given his stance on immigration (against it – wants to keep Hungary for Hungary) and his thoughts on freedom of the press (to be limited), it was a little strange indeed, particularly given his self-professed determination to create an illiberal democracy. John Lichfield, writing in The Independent points out Orbán’s 2010 move to ‘restrict independent media’ and wonders, too, why he was invited.

But column inches and whys and wherefores aside, what caught my attention was a photo of President Hollande greeting Orbán (bottom centre) mixed in with photos of how he greeted others (kézfogások = handshakes) that is doing the rounds on Facebook. Was it happenchance or was it a matter of deliberate diplomatic distancing? 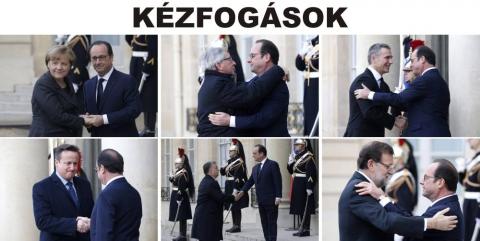 Perhaps this is just one of the many questions what will be answered by Mr Olaph Terribile, personal secretary to the Minister for Foreign Affairs of Malta, and former Director of Protocol and Consular Services, at a one-day personal development workshop on Diplomatic Protocol and Etiquette on 8 February.

Laugh and the world laughs with you … or does it?Taking Internet governance webinars to the next level
Scroll to top