You are here: Home1 / Lessons for Diplomacy and Development from ‘Nepal in Transition’

Lessons for Diplomacy and Development from ‘Nepal in Transition’

A contemporary Maoist revolutionary movement that launched a 10-year ‘People’s War’ seems ‘anachronistic in a post-Cold War context’, note the author/editors in their introduction to an excellent collection of articles, ‘Nepal in Transition‘. And while the current stalemate in Nepali politics has depressing echoes of many failed social movements, the Maoists played a catalytic role in the ending of Nepal’s ancient monarchy and the resulting settlement, which displayed at least the first glimmerings of a more equitable political and economic settlement for the many marginalized groups within Nepal’s abundantly diverse ethnic and social environment. ‘A sense of deprivation has been acute throughout Nepal’s history, and even a cursory look at the nature of the Nepali state shows that the ruling class has been nothing but a rapacious bunch of self serving individuals all the way down to the modern era, and most jarringly in the post-1990 democratic era’. As illustrated by this quote from Deepak Thaka’s excellent analysis of how the Maoist People’s War came about, most of the authors pull no punches in their contributions, which adds hugely to the books readability. Another major advantage of the book is that the majority of the authors are Nepali, a mixture of academics, journalists and civil society actors. The international contributors include people who have been key actors in the processes surrounding the war and peace process from within the UN system and donor community.

For Diplomats and students of international relations the book is a rich source of case-study material on contemporary conflict and post-conflict engagement. A key chapter is the account of the process that led to the formation of the UN Mission to Nepal (UNMIN) by its Director, Ian Martin. Building credibility and trust from all sides through a highly regarded and effective Human Rights Monitoring mission, UNMIN played a key intermediary role. Martin describes vividly the constraints and opportunities posed by the mission’s mandate, the dynamism and fluidity of the political situation and the role of international actors.

There are more lessons for students of Development Diplomacy, with a withering account of the poor performance of the Development community over the years – ‘captured’ by a Kathmandu elite and too slow to recognize the profoundly political nature of the conflict – and a sobering account from a donor of the limitations to even their influence. Traveling in the country recently I was struck by the contrast between these accounts of ineffective investment and low impact programs and the direct impact of foreign money on those communities living on the main tourist routes, in the Himalaya and elsewhere in the country. The tawdry tourist centre of Kathmandu, Thamel, illustrates the negative impacts of mass tourism. But for those who provide lodging, carry goods and guide in the mountains tourists provide a source of direct income, unmediated by the ‘development industry’ or Government agencies. It’s a form of direct-transfer, a strategy which has become mainstream within the Development Community. Clearly, tourism is a fickle income source, which threatens the sustainability of this kind of Development. However, there is only one Everest. As European and US tourism declines, numbers continue to rise from China, Korea, Thailand and other Asian countries.

The book also describes well the reality and difficulties facing small states in contemporary diplomacy. The complexity of the Nepal context illustrates Anne-Marie Slaughter’s ‘Lego world’ in that political and economic processes have been, and continue to be, influenced by myriad actors from all sectors of Nepal society and, of course, also by many actors from outside Nepal. Another of the many strengths of the book is the depiction of how it feels to be a ‘yam between two boulders’, the old metaphor used to describe Nepal’s situation between India and China. India is to Nepal what China is to North Korea (an analogy based on this insightful article on the current crisis in Korea). And, in another illustration of the reality of working in a ‘Lego world’, the players in India who ally with and influence Nepali affairs come from a wide range of Government, Civil Society and political parties.

For Nepali diplomats themselves, the political stalemate means, ‘more than half a dozen Nepali embassies and missions have remained leaderless for a long time, thanks mainly to the scramble for bhaagbandaa (quota) by our political leadership, which has greatly eroded Nepal’s diplomatic image in the international community’. Narayan Pant, former Joint Secretary at the Ministry of Foreign Affairs, continues in his recent article: ‘what has crippled our diplomatic missions, to a large extent, is that our political leadership is much too happy to hobnob with foreign diplomats. Because of this, not only is Nepal losing its dignity, but the county is also failing to consolidate and fully mobilize its diplomatic missions. …. The hard reality in our case is that, sometimes, the wait for even courtesy calls with government officials other than those from the Foreign Ministry is agonizingly slow. Our ambassadors or heads of missions face more or less the same fate and ignominy everywhere’

The book’s editors find it hard to be optimistic about the political realities, and whether what Pant calls the  ‘scramble for bhaagbandaa’ will ‘allow state transformation to proceed and ultimately deliver a new social contract on which a new polity can be built’. Much will depend on India and, to a lesser extent, China although for neither is Nepal regularly a top priority. Peace negotiations in Nepal began in 2006, according to the book’s editors, because the military opponents had reached a, ‘mutually hurting stalemate’. Diplomats tend to focus, patiently, on long-term trends.  The poor in Nepal have been patient for millennia – and ‘in the long run, we’re all dead’, said Keynes, almost paraphrasing a central tenet of Buddhism. But there is always hope, to quote a Banksy visual 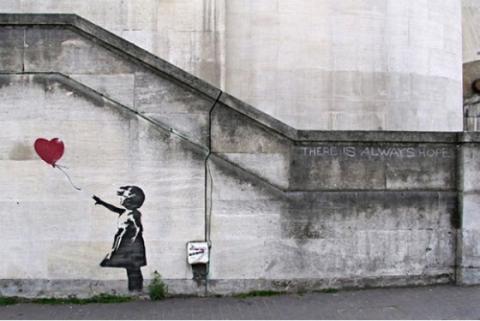