You are here: Home1 / Wisdom and Empathy in Diplomacy

Wisdom and Empathy in Diplomacy

‘We cannot afford to get wise slowly’ was the answer from one junior diplomat to my question about how young diplomats, attending last week’s Seminar on ‘Excellence in Diplomacy’ in Belgrade, demonstrated so much wisdom. Wisdom is usually associated with age and experience.

The Belgrade seminar is an annual event, which I have been attending for the last 5 years.  It is organized by a very dedicated and creative team from the Diplomatic Academy in Belgrade. In recent years, we have followed more-or-less the usual rhetorical rituals, a mix of sharing global aspirations (more peace, better world) and global concerns (climate change, financial crisis).

This year, it was different. While our aspirations and concerns remind the same, the participants moved beyond the ‘obvious’ and exressed quite a few remarkable insights about the diplomatic profession. Here are a few lines from my notes, taken at the Belgrade seminar…

The lack of resources, prompted by the current financial crisis, is becoming a useful excuse for inactivity. Yes, there is a need for more funds, but a lot can be achieved without resources.  One participant mentioned her ambassador, who played typical national music in Nairobi, and did much more for the visibility of his country than traditional public diplomacy. As can be observed in e-diplomacy, plentiful funding can be counter-productive by prompting mega projects, removed from reality (see reflections by Richard Boly, director of eDiplomacy at the US State Department and the Swiss Ambassador Alexandre Fasel).

Another participant at the Belgrade seminar made a vivid comment about how the strict hierarchy in diplomatic services reduces the effective use of the pool of all talents which exists in-house. It also reflected the quote of Richard Boly in Geneva: ‘If the State Department only knew what the State Department knew, we’d be closer to world peace. ‘ How to find a way to activate all of the talents and expertise in diplomatic services worldwide?

Many participants were very blunt about the low esteem the general public holds for the diplomatic profession. There are many stereotypes about diplomacy and diplomatic life, sometimes promoted by diplomats themselves. But, again, the wisdom of the room in Belgrade was clear: we have to do whatever we can to change this perception. Yes, we can communicate better what we do. But, as was strongly highlighted, the diplomats’ lifestyle itself should also convey this message about the profession. Modesty and empathy with the broader public, especially in countries with wide social divisions, would help the public image of the diplomatic profession.

This was a quick extract from a very rich discussion at the Belgrade seminar. The interventions on how diplomacy should look, made me think of Branislav Milinkovic, a Serbian ambassador who tragically passed away a few weeks ago. He embodied many of the characteristics of an ideal diplomat.  I knew Branislav (Branko) from our childhood, when we played table tennis together.  Since those early days, Branko was one of the pillars for our generation. Even if we had not seen each other for years, he was “there” as someone special for many of us.

Branko was a real erudite, curious, and always on the move to learn more. He studied law and theater. Branko carried his encyclopedic knowledge in a very easy way. His enormous knowledge never embarrassed others, which is a risk with people who know a lot. Yes, his presentations at academic and diplomatic conferences were memorable. But, I can still recall how easily he interacted with taxi drivers and waiters. It was always genuine dialogue. Branko was a very good listener, with strong empathy. He was equally popular in Belgrade table tennis circles 40 years ago and in NATO Conference rooms later on.

Branko was very modest. I can still remember visiting him in Brussels a few years ago. He used to live in a small studio apartment, of less than 40 m2. For him, diplomacy was not about expensive hotels and limousines. It was an important and responsible profession. Sometimes, fortunately not too often, when I meet young diplomats who argue that the representation of their State is related to number of stars assigned to the hotel where they stay, or the car they drive, I offer Branko’s example.

During that visit to Brussels, Branko spent an hour with my – at that time – 6 year-old daughter (photo) 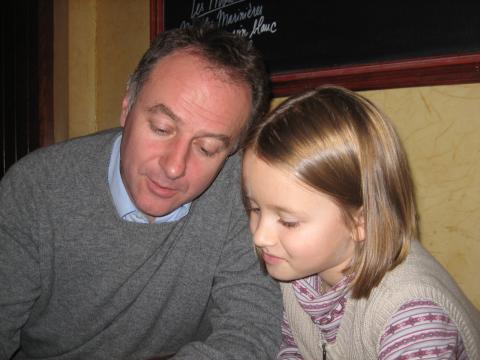 . He was answering her difficult questions by drawing pictures, and making jokes. She loved him and gave him a nickname – in Serbian – ‘Velika Glava’ (‘Big Head’, as her metaphor for somebody who knew all of the answers). Kids loved Branko, and as we know, kids know how to judge people.

I was always proud to hear comments, from other diplomats, about Branko as both extraordinary diplomat and nice person. Comments after his death, by the high NATO officials, go far beyond diplomatic niceties. He was highly respected and admired at NATO, the place where it was probably the most difficult to be the Serbian ambassador.

While I was listening to the young diplomats at the Belgrade workshop on excellence in diplomacy, Branko was often in my mind. Their wisdom, modesty and sense of responsibility are very encouraging.  Branko was ‘(your) Excellency’, in the real meaning of this phrase, beyond formality. A new generation of genuine “excellencies’ is coming to the diplomatic scene. This is good news not only for the diplomatic profession, but also for humanity, which needs more wisdom and empathy.

The humanitarian perspective empowers your advocacy

Diplomacy and technology: An introduction

‘The Ambassador’s New Car’ and other lessons from Sina We...“One state one vote” in climate change negotiations
Scroll to top