You are here: Home1 / [WebDebate #20 summary] Strategies for African States in Multilateral ...

The overarching question of the WebDebate in March was: how can African states navigate multilateral diplomacy successfully?

Addressing this formidable question were Amb. Amr Aljowaily, Egypt’s ambassador to Serbia, and Dr Yolanda Kemp Spies, a senior research fellow at the University of Johannesburg’s Chair in African Diplomacy and Foreign Policy. The debate was moderated by Dr Katharina Höne, research associate in diplomacy and global governance at DiploFoundation.

Spies began by stressing the deep significance of multilateralism for Africa. Africa was arbitrarily divided under the colonial rule and the political borders do not indicate ethnic or other affiliations, which made state-building a much more difficult project in Africa than elsewhere in the world, as artificial states had to be consolidated. Because of the historical divisions, Africans have developed a strong focus on unity and the integration of the continent, sometimes at a fault, because it precludes some other more rational multilateral decisions. Africa has tended to form blocks in multilateral organisations such as the UN. Individual countries have chosen to engage Africa as a whole: China, Japan, Turkey and Korea. There is an inclination to treat Africa as a unit with single unitary interests. However, it is not a unit, and has very serious divisions in terms of its unity project.

Spies said that a several ideas are driving Africa’s multilateral project forward. Africa needs to become much more critical and strategic in its multilateral projects, and more flexible about moving into multilateral formations that are more minilateral (plurilateral) within international forums, so that a critical mass of African states could be sufficient to drive an agenda without necessarily wanting to invoke continental consensus. Another multilateral strategy is to be flexible, so that states can also reach out to non-state actors in the new form of diplomacy called polylateral diplomacy. African countries must also do their homework before they enter into negotiations of multilateral treaties, and they need to read the fine print in legal deals and treaties in order to prevent them for suffering from buyer’s remorse. Often, representatives from African countries are outnumbered by the negotiating teams of other countries who come better prepared; African countries need to make the most of their own resources and team up with each other to combine their areas of expertise. Diplomats in Africa are also vastly undertrained, and organisations such as the African Union (AU) could focus more on the diplomatic training of their members.

In their multilateral strategies, African diplomats should not be naive about the world and emerging powers. The fact that other countries are also developing countries, does not necessarily mean that they have Africa’s best interests at heart. There is a new scramble for Africa as new emerging powers are moving into Africa. As a continent, Africa must be very open-minded, but also very realistic about the agendas that are now coming to the continent.

Aljowaily identified some of the obstacles that African states face in their multilateral diplomatic work. Taking the UN as an example, as it is the only universal organisation with a comprehensive mandate, he noted that many of its headquarters are in the states that belong to the global North, meaning that Africa is represented to a lesser extent in terms of multilateral venue and headquarters. Another challenge for Africa, he said, is complexity, as many subjects being discussed within international relations are becoming more technical and specialised, demanding a unique blend of diplomatic experience and specialised and technical knowledge. The emergence of multistakeholder diplomacy adds to this complexity. It is challenging for African countries to open up to this form of international relations, but it is important for them to do so in order to have genuine, grassroot representation, defending their points of view and promoting their interests. Next, Aljowaily pointed out that the form of negotiations is becoming more complex – that there are more and more parallel meetings, and increasing layers and structures of negotiations, which puts additional pressure on countries that have limited financial and human resources.

In terms of strategies to overcome these obstacles, it should firstly be recognised that Africa has a unique platform. The UN has five regional groups, and the African group has the incredible advantage of not only being an electoral group like the other groups, but also, of having increasingly common positions in negotiations that take place within the seat of AU and elsewhere. Aljowaily opined that that is a dimension and strategy that is yet to be fully utilised and it has a lot of potential. The second strategy that the ambassador pointed out, would be to recognise that African states are a part of a larger whole – they are a part of developing countries, and developing countries have two very well-established negotiating groups in multilateral fora: G77 and the Non-Aligned Movement. While it may seem that the epochal era for these two platforms has gone by, Aljowaily said that he believes that there is actually more need for these platforms now, in order to defend the basic principles of multilateralism – open, transparent, democratic, decision making in particular.

The impact of conflict in Africa

Spies acknowledged that conflict is a great concern for Africa because it has a huge influence on the developmental status of African countries and their achievement of universal goals in terms of quality of human life. The UN Security Council, the forum where world peace and security is authoritatively deliberated on, lacks permanent African representation. Yet, Africa itself has placed an emphasis on the peace and security architecture through the AU. Spies underlined that at this stage, the continent is working on addressing its problems, because not addressing peace and security in Africa leaves space for foreign involvement that sometimes comes at a great cost. These issues must be addressed through multilateralism, she emphasised, as conflicts in Africa usually start as intrastate conflicts that spill over into the region and even the continent. Spies also acknowledged that the entire world has an interest in seeing peace and security in Africa, but warns that Africans must not let others dictate how this will be achieved.

Aljowaily noted that the type of environment needed at multilateral fora is one that enables multilateralism. Open participation in negotiations is not enough – the rules of the game and the dynamics of the negotiations need to enable developing countries to project their views and defend their interests. It is important to develop the intellectual capacities of African countries in terms of presenting and shaping the discourse, the talking points, and the proposals to be presented. Here, multilateral diplomats from developing countries have the advantage of having a network of research centers, think-tanks and university centers, supporting them with research, evidence-based studies and academic contributions in general. Enabling these institutions is therefore very important for raising capacities. Aljowaily believes that another way of raising capacities is to learn from past experiences. A record of the accumulated experience of leading African negotiators would immensely help the current generation of diplomats and multilateral negotiations.

Spies stressed that Africa is the only continent that has a unified position regarding the UN Security Council reform, however, the Ezulwini Consensus is not really a consensus – this position was agreed upon by a majority in the AU and should be revisited. This consensus needs to be more flexible and it needs to be aligned with other groups that are also advocating the Security Council reform, that also want Africa represented there. However, peace and security are increasingly being discussed at other venues, Spies noted. And it is increasingly difficult for the Security Council to intervene without the support of the regional organisations.

Aljowaily offered a different perspective. He agrees that Africa is unique in being the only regional group with a common position, and adds that it is adopted at the highest level and regularly reiterated at summits and assemblies of the heads of states of the AU. As other negotiating groups have not made significant changes to their proposals for the Security Council reform, Africa should continue to promote its Ezulwini Consensus, especially since it is getting more public support from countries outside the AU.

Capacity building for the future

Asked about capacity building approaches for the future, Spies proposed significant regional diplomatic academies, situated in various regions of Africa. The AU should coordinate and ensure that sufficient funding and resources are allocated, as governments do not always allocate enough resources for diplomatic training. Foreign diplomatic training should be a secondary resource for Africa, as diplomats trained by foreign entities get inducted into another diplomatic culture rather than their own. Similarly, Aljowaily noted that African countries lack material and intellectual support for the positions they project. There needs to be a united message, even if there is a multiplicity of messages – diplomats from African countries should speak with the same voice and the same materials. Upgrading policy research that is supportive of diplomatic and foreign policy machinery would be one important form of capacity building.

Political appointees: more trouble for Trump with the CIA? 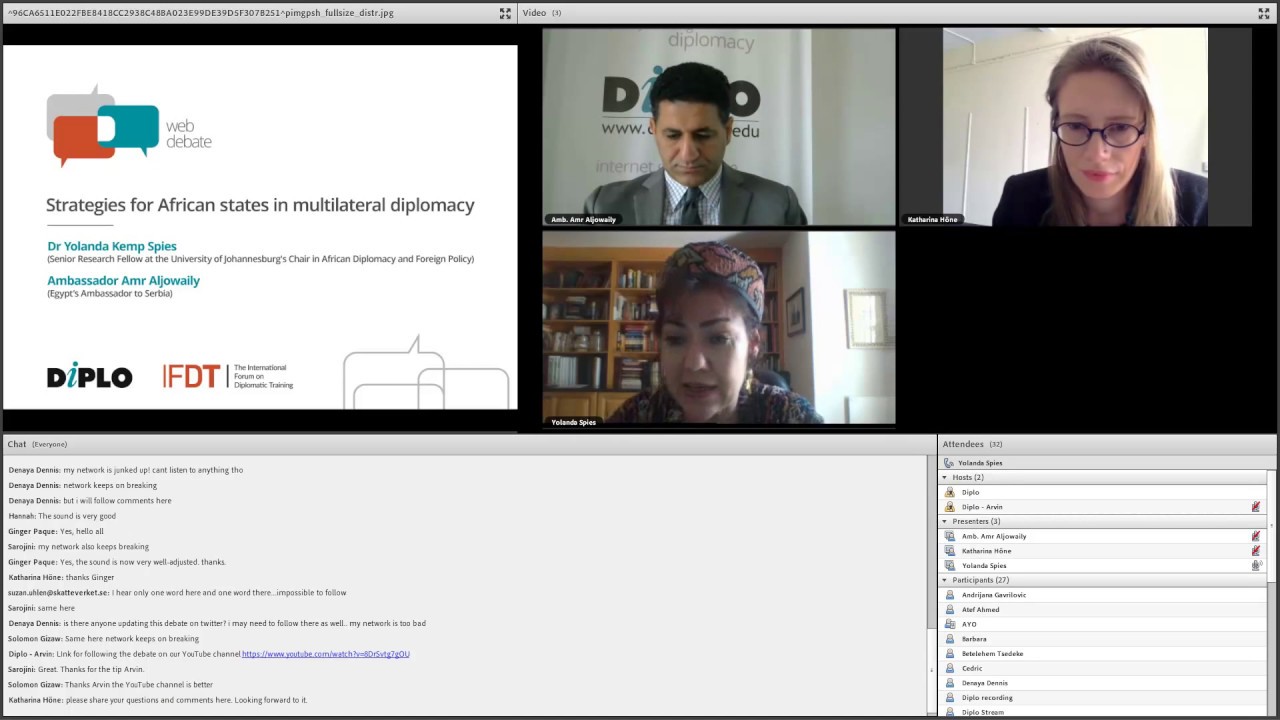 US Cloud Act: implications and reactionsThe future of work: preparing for automation and the gig economy
Scroll to top