You are here: Home1 / [WebDebate #3 summary] Is research on diplomacy relevant and useful?

[WebDebate #3 summary] Is research on diplomacy relevant and useful?

There is increasing interest among researchers of diplomacy in studying the field from various angles, from legal aspects and governance structures, to anthropological and cultural studies. Researchers often look at whether, and how, diplomacy contributes to better global governance. A growing opus of research deals with the impact of new technologies on diplomacy. The underlying question is whether this research opus is useful and relevant for a better understanding of diplomacy and its role in modern society.

Prof. Yolanda Spies, from Johannesburg University, and Prof. Alan Henrikson, from the Fletcher School of Law and Diplomacy shared their rich experience in research on diplomacy during the third WebDebate, moderated by DiploFoundation director Dr Jovan Kurbalija. Prof. Henrikson opened the discussion by quoting Henry Kissinger: ‘History is the only policy science.’ According to Henrikson, history is contextual, conjunctural, and continual. In the study of diplomacy from a historical perspective, we become mindful of the importance of context. The study of history is also conjunctural; we become very conscious of coincidences, the way things happen together, and the importance of timing. Quoting Francesco Guicciardini, a Florentine statesman – ‘It’s not enough to make an agreement, one needs to follow up’ – Henrikson also pointed out that diplomacy is continual. But although an historical perspective of diplomacy is fundamental in many ways, it is not the only angle of research on the subject of diplomacy. He said that legal and anthropological perspectives are also of the utmost importance. But no matter from which perspective we look ‒ historical, legal, or anthropological – research is fundamental.[1]

In her opening remarks, Prof. Spies mentioned that when she first dove into academic waters, she decided to focus on the study of international relations, as that particular area of diplomacy was understudied and didn’t have a strong theoretical base. It is interdisciplinary, as is diplomacy itself; it has to connect dots. She also pointed out that the practitioners of diplomacy should also do research, as it enriches the academic field. At the core of diplomacy lies the handling of information and the communication thereof. Diplomacy is about representation and intermediation, but it is only done with information and communication. Therefore, diplomats are part of the knowledge industry. Diplomats continuously write history, but most of it goes into classified archives. They are often unaware that this is the heritage for future generations. Diplomatic studies help diplomats to do better analysis, make better interpretations, and find more synthesis. Answering the question of whether research in diplomacy is relevant and useful, Spies pointed out that it is necessary, even crucial – not just the outcomes of the research, but the actual process of doing the research, because that builds diplomatic networks. It builds the information that underlies diplomacy. There is no negative side in doing research on diplomacy.

Dr Kurbalija, moderator of the debate, mentioned many important issues that were raised ‒ the question of multidisciplinarity, the risk of working in silos, and the contribution to the knowledge industry. He stressed the importance of diplomats engaging in the research and teaching, as it is a process in itself.

During the WebDebate, the online audience interacted with the speakers through many comments and questions. One of the questions posed was whether career diplomats make sufficient use of academic research in their daily activities. Spies replied that career diplomats are, unfortunately, deluged by ordinary bureaucracy, and don’t have time to read extensively, which in her opinion is a pity. She has encountered many senior diplomats, who have served as ambassadors, or have been involved in the international negotiations; they were unaware of some very important and relevant research that has been done. Henrikson noticed that most diplomats are extremely interested in the autobiographies and memoires of diplomats and statesmen who have dealt with the country or issue that they themselves are working on. There is a lot of accumulated knowledge in the archives, and it is important to preserve the oral history. He also reflected on the dual use of history, and the use of historical analogies.

She said that she is a passionate advocate of more reflection – we need to generate more information, and diplomats have a wealth of experience we can draw on. Spies said that, if possible, she would make it a rule that diplomats should write down their experiences and personal reflections.

In his concluding remark, Henrikson pointed out that most diplomats are highly educated, cosmopolitan people with a vast store of knowledge. The more their deep knowledge and cultural understanding can influence policy-making, the better.

Spies said that research on diplomacy is a limited resource in Africa, and she would like if more people could publish on this topic. Diplomats should also be used as a resource by academics. They, diplomats, should teach more and be involved in interdisciplinary projects. In her opinion, this resource is almost wasted, and should be seized in order to benefit from the best of the best that is out there.

[1] During his presentation Prof. Henrikson made a lot of references to books related to the field of diplomacy, diplomatic history, law, and anthropology. The list of references is available below.

Registrations for the next WebDebate are now open. Join us on 5 July, at 11 UTC; if you form part of a dynamic circle of diplomacy practitioners in your community, we encourage you to establish a diplomatic hub to follow the WebDebates and to facilitate discussions.

The WebDebates on the future of diplomacy are livestreamed on the first Tuesday of every month. They are organised by DiploFoundation within the framework of the International Forum on Diplomatic Training (IFDT). Learn more about our series of WebDebates. 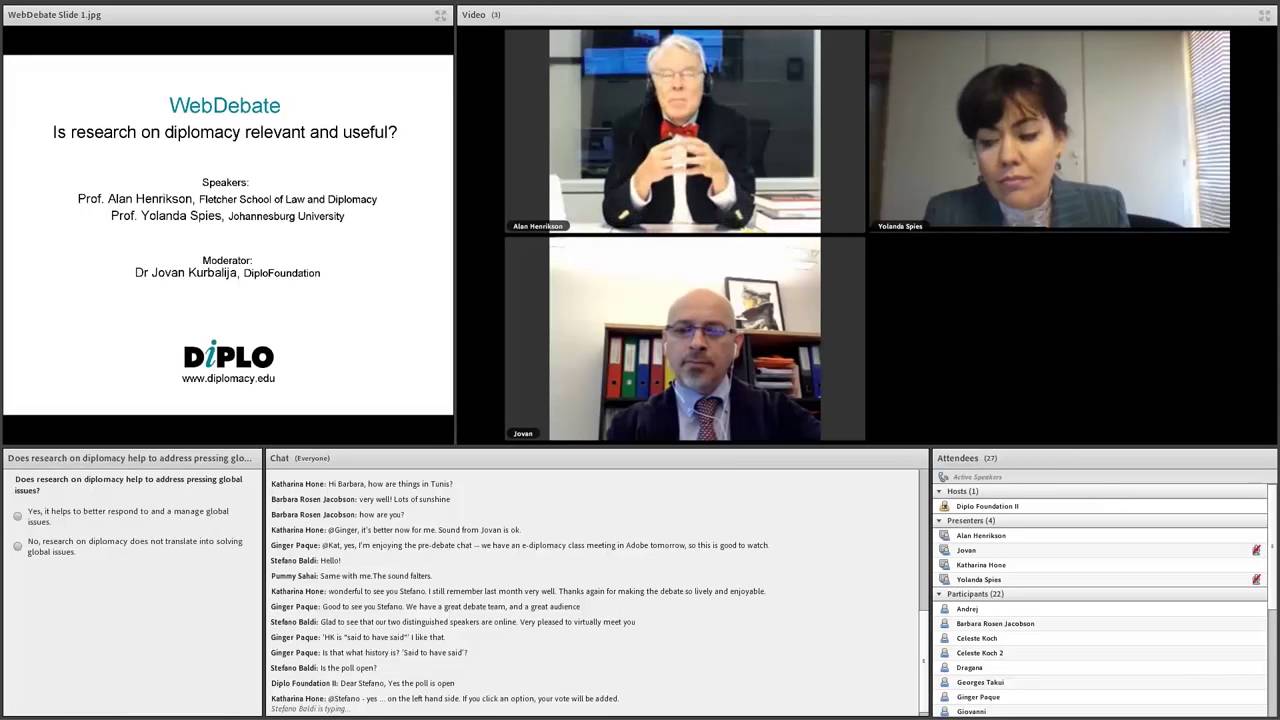 The humanitarian perspective empowers your advocacy

Where are you (in the digital world)?A 200-year-old Frankenstein memory: alive and well
Scroll to top