You are here: Home1 / [WebDebate #25 summary] Blockchain for development: a critical assessm...

The origins of blockchain

Kamberi explained that blockchain is a continuation of previous cryptographic efforts, therefore, its roots lie in the development of modern cryptography. However, the concept of blockchain that we discuss today actually emerged in 2008, as a solution for the previous unsolved problem of the ‘double spending’ of digital cash. It was introduced in a white paper entitled, ‘Bitcoin: A Peer-to-Peer Electronic Cash System’ by an anonymous entity dubbed Satoshi Nakamoto. While this document did not mention ‘blockchain’ per se, it explained the idea of blockchain and the concept of applying cryptography on the Internet for creating a system for transactions between two parties.

As digital data can be copied, there is a danger that it can be transacted or spent more than once – an issue called ‘double-spending’. In systems like this, a central authority is needed to verify a transaction. However, the white paper by Satoshi Nakamoto proposed a system where no trusted institution in the middle exists. This can only be achieved if everyone in the system knows everything that has happened in the system from its beginning. In that sense, blockchain is a distributed data ledger of all transactions in one system.

Blockchain has introduced a combination of two things: hashing, and time-stamping. Digital data is put in a container which has a hashed (encrypted) header, forming a block. When this container is full of transactions, it is broadcasted on the Internet. The next block of data would then refer to the previous block of data by using the cryptographic function and time stamp. Hash serves as a digital fingerprint – it helps us ascertain that one block of data has been generated from the previous block of data in that chain, in chronological order. This prevents data tempering and enables the immutability of the system. It is important to note that every participant in this system runs the exact same database on their own computer. This significantly improves the security of the system – because all participants act as a server, the system is hard to take down.

How the blockchain transports data

The elements of a blockchain network

Blockchain for development is a frequent topic in diplomatic discussions, Dinčić pointed out. He reminded the participants that in the past, several waves of international development were technology driven and technology was considered to be the key point for the next step in development. However, he cautioned that key properties of blockchain technology that are different and that have empowering potential need to be kept in mind. According to Dinčić, a balance should be found between the high expectation of the implementation of blockchain, and the rational direction of resources and effort into development efforts.

Personal data in a blockchain

As far as digital identities are concerned, the idea is that we should own our own identities on the Internet, own our personal encryption keys, Kamberi explained. Without easy to use programs and intuitive user interfaces to help us hande our personal data, inaccurate data may be created from our devices and put into a blockchain. Computers and other devices used to connect to that blockchain can be vulnerable, tampered with, or hacked. Therefore, in order to handle their data securely, users need to be very well versed in encryption.

The GDPR was not created with blockchain in mind, Kamberi noted. Some issues are now arising from this, such as who controls the data, who processes the data, and the geolocation of the data. In Kamberi’s opinion, a few changes both on the regulatory side and the technology side can make the GDPR and blockchain compatible. The biggest issues are whether obfuscation of personal data through additional encryption methods, means deletion of data. Kamberi stated that the multistakeholder approach could work around these legal issues and include regulation more specific to blockchain into the GDPR.

Reasons for the slow uptake of blockchain technology

One of the key reasons for so few large scale applications of blockchain, according to Dinčić, is that a distributed system like blockchain requires a different form of governance. We have to understand the context in which we want to apply the blockchain technology and pay attention to the social and governance aspects of the domains in which we want to apply blockchain. The other issue is the technology’s tricky nature – blockchain is nominally available for everyone to create but the data and values that are transacted require that blockchain and the end-points are secure.

Is cryptocurrency a scam?

The introduction of blockchain came amidst the global economic crisis of 2009, with the goal of creating an alternative to the central banking/financial system, Kamberi stated. That is why it was first used in cryptocurrencies. One would think that there is no need for obscure Internet money and cryptocurrencies when there is transparency in financial institutions who are trusted parties, run by democratic governments. However, another perspective must be kept in mind: there are parts of the world that do not have access to financial services but would like to participate in the global Internet exchange of goods. Because of this, an universal Internet currency which people can use to engage in financial transactions is needed, and could be very useful.

Implementing blockchain for e-voting would not present a technological challenge, according to Kamberi. He reiterated that the problem is the security of the devices which voters are voting from. If the device is not secure, the transfer of data is not secure, and the vote can be wrongly cast. There were several documented issues of ballot machines being hacked, not to mention computers or phones.

Kamberi concluded that blockchain-related solutions should not be dismissed. The important thing, he noted, is to preserve a free and open Internet on top of which we can innovate further.

Dinčić concluded that blockchain has its empowering properties and that it can be used to make a difference – to achieve the SDGs and other development goals. However, a fine balance must be struck between expectations and reality – the real possible applications of this technology. 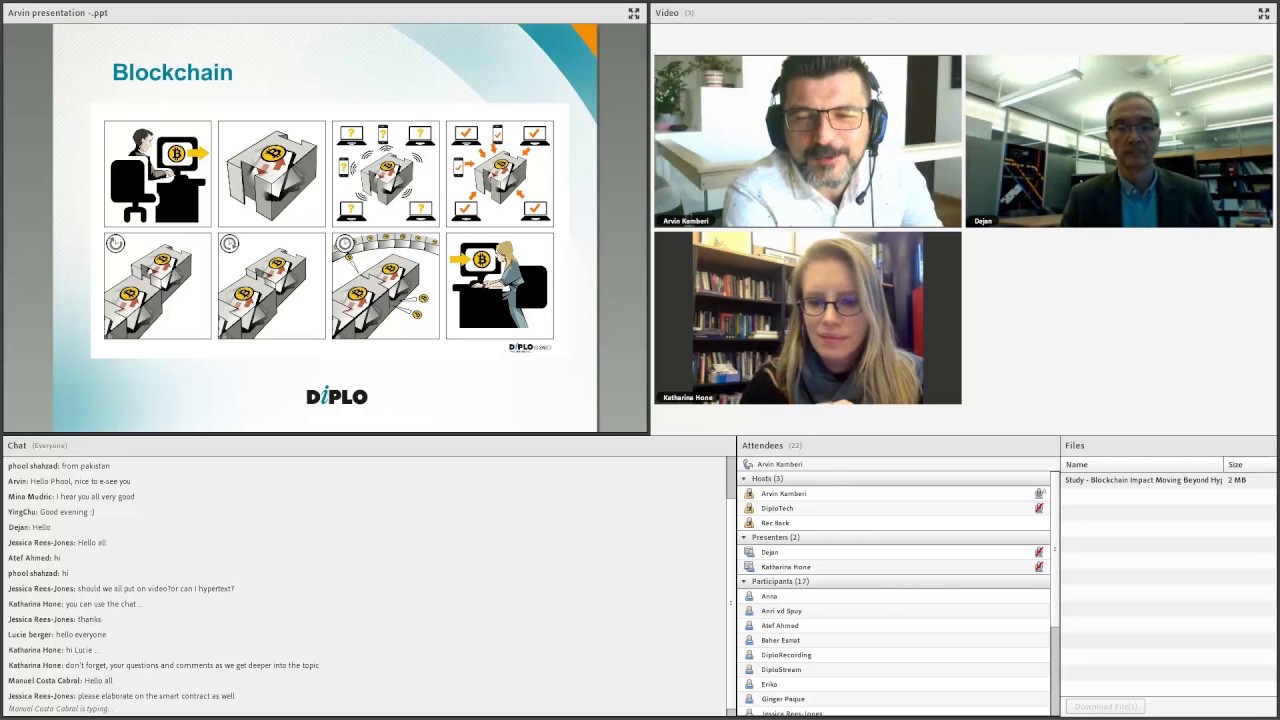