Internet governance (IG) is about the rules, policies, standards, and practices that determine how cyberspace is governed. It goes beyond technical and infrastructural considerations, and addresses the legal, economic, developmental, sociocultural, and human rights implications of cyberspace.

Formed in 2006, the Internet Governance Forum (IGF) is a multistakeholder forum for discussing these issues. Multistakeholderism – the participation of all relevant stakeholders – is really the core value and a core practice of the IGF.

In our 43rd WebDebate in the context of the International Forum on Diplomatic Training (IFDT), we brought together a group of highly experienced speakers to reflect on the future of the IGF and debate the topic IGF+: What’s next?. This debate could not be more timely as the annual IGF meeting is underway. WebDebate #43 presented an opportunity to bring the discussion around the organisation and process of IG into the context of the IFDT.

The first IGF took place in 2006, and continues to be an absolutely unique forum. Some would say that if the IGF did not exist, it would surely have to be invented. Yet, debates about IGF reform are intertwined with debates about the goals and purpose of the forum, and are almost as old as the forum itself. Some of the key issues center around questions of inclusivity, coordination and cooperation, concrete outcomes, financing, and the relationship to the UN system.

In June 2019, the UN High-level Panel on Digital Cooperation, which was mandated by the UN secretary general, launched its final report The age of digital interdependence. As part of addressing digital cooperation, the panel made suggestions on the future of the IGF architecture. One of these suggestions was the IGF Plus (IGF+) model, which at this point seems to be one of the favourite options for IGF reform and for the future of IG. Building on the High-level Panel’s recommendations, the UN secretary general launched his Roadmap for Digital Cooperation, containing a section on digital cooperation and IG reform.

Generally speaking, what are some hopeful signs regarding IGF reform?

Drake suggested that the processes initiated by the High-level Panel, and further developed in the Roadmap, are a good sign. Involvement at this level ensures the engagement of governments, and provides for a more institutionalised dialogue on IGF reform. It also led to new circles of interested stakeholders being engaged in the process. The suggestions for a high-level segment and a parliamentary track are welcomed additions. The suggestion of establishing concrete IGF outcomes or recommendations is still discussed controversially, but having this discussion in the first place is a good sign.

What are some of the concerns in this process?

Drake warned against a top-down approach or an intransparent, closed-door decision-making approach to IGF reform, which would run counter to the spirit of the forum. Further, it will be important to have a broad basis of agreement and buy-in for IGF reform. Building a group of, for example, ‘Champions for Change’ is, however, a tremendous challenge. The following discussion further underscored that any notion of hierarchy in the institutional character of the IGF, or the debates taking place at the forum, need to be avoided. The IGF is built on the principle of horizontal relations between stakeholders, and there was an emphasis that this spirit needs to be retained going forward. Panellists and participants also identified and raised concerns about an increasing fragmentation of IG-related debates, exacerbated by geopolitical tensions and fragmentation. There was a sense that reform is urgent but has to proceed incrementally in a bottom-up fashion.

A reform process needs to have legitimacy. What have we learned from the consultation processes leading up to the Roadmap?

It is clear that we cannot just focus on the content but also need to pay close attention to the processes. Kettemann suggested that it is not enough to ask ‘the experts’, and called for a broader involvement of populations from across the world to develop recommendations for the reform. Applying deliberative democracy approaches in this context is important. This is especially important in an area such as the governance of the Internet, which is closely intertwined with the lives and livelihoods of many people around the world. In particular, Kettemann drew on his experiences with regional consultation processes in the lead-up to developing recommendations on the IG architecture for the Roadmap.

What are the specific concerns from the perspective of developing countries? What role can and should the IGF play?

Cavalli reminded everyone that developing countries face tremendous challenges to their economies and that the COVID-19 pandemic exacerbates this problem. In a sense, developing countries have to focus on the most urgent matters at hand, and very often this means that discussions on IG take a backseat. At the same time, digitisation plays a huge role for these economies. It will be important to think strategically how to incorporate technology into the economy of developing countries, and there is a lot of work that still needs to be done. A particular challenge is to capture the views of various stakeholders and to translate these into policies and regulations. It is noticeable that those who are responsible for defining policies and regulations face capacity and resource challenges to follow the various IG-related topics and debates. A forum like the IGF is important in this regard as a point of focus for those debates, and a forum to promote the exchange between colleagues from various countries, learn from best practices, and discuss and compare policies and regulations.

What can we say about the future of the governance of the Internet?

Calderaro suggested that this is a huge question that, in many ways, boils down to the question of finding an effective approach for transnational governance. As we have seen over the last 20 years or so, new issues are emerging as technology advances, and so IG, by its very nature, always deals with a moving target. Looking at the current situation, a fragmentation of IG communities and spaces for debates, in the area of cybersecurity for example, is a huge concern. This is a challenge that IG faces and that urgently needs to be addressed to ensure that the IG community is able to address current and future challenges effectively. As a simple first step, formats for the IGF that bring different parts of the IG community together for discussion should be explored again. This could also support capacity building and establish clear lines of dialogue between various stakeholders. Overall, this touches on many of the original aspirations of the IGF, and panellists suggested that we need to find ways to reinvigorate that spirit.

Water cooperation: The solution for regional conflicts in arid areas?

Gender and diplomatic training – towards better curricula and holistic approaches 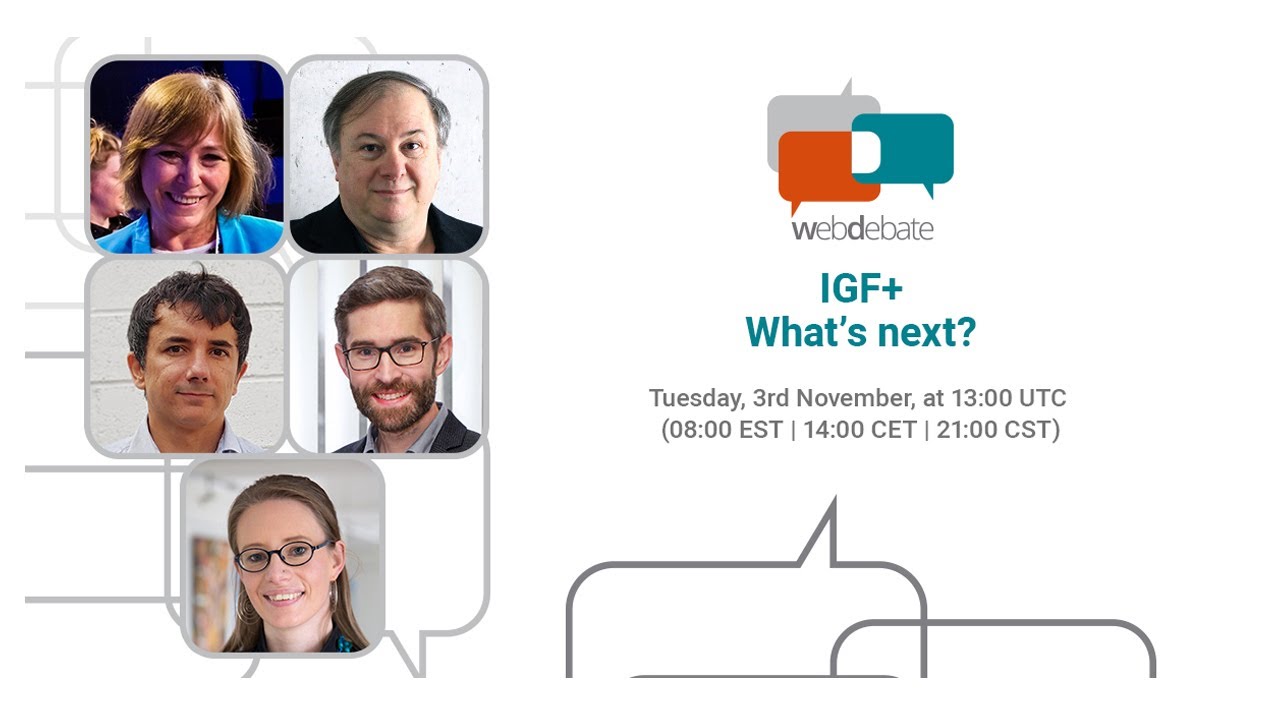 [Summary] RightOn #13: Human rights and the precarious condition of electoral...Internet protocols and human rights: Interplay or interdependence?
Scroll to top