You are here: Home1 / Standardisation – The Key to Unlock the Sustainable Development Goals (...

Standardisation – The Key to Unlock the Sustainable Development Goals (SDGs)

Is standardisation a key to unlocking the 17 Sustainable Development goals adopted in the framework of the 2030 Agenda? How can the goals be translated into actions? How can standards be developed and used to attain the goals?

These were the topics discussed during a recent webinar on Standardisation – The Key to Unlock the Sustainable Development Goals (SDGs), held on Febraury 9th 2017. The webinar was led by Mrs Lorenza Jachia, Secretary to the UNECE Working Party on Regulatory Cooperation and Standardization Policies, who explained the role of standardisation in the attainment of the goal,s during the first part of the webinar, and moderated a hands-on practical exercise on business continuity management in the second part.

The SDGs were adopted in 2015 as part of the Post-2015 Development Agenda. 2015 was a historic year for the UN, which started with the adoption of the Sendai Framework for Disaster Risk Reduction in March 2015, a 15-year action plan to make the world safer from disasters, both natural and man-made. It was followed by the Financing for Development Conference which was concluded successfully in June and which gave the international community the means for its ambition. That, in turn, was followed by the Adoption of the SDGs by the UN General Assembly in September 2015. In December 2015, the COP 21 Conference adopted the Paris Agreement. In October 2016, The New Urban Agenda was adopted by the Habitat III Conference, which had brought the Sustainable Development Agenda in its entirety to the local level.

Human demands are becoming ever greater but the Earth’s resources are always the same. Jachia believes that in order to strike a balance between these two, standardisation, as it has the potential to play a leading role in promoting sustainable development, in its three key dimensions (economic growth, environmental integrity, and societal equity).

What is a standard?

A standard is an agreed way of doing something, like producing a product, simple or complex, or performing a process. Standards have an impact on our daily lives. For example, the A4 paper we use in our printers is standardised, which is why they do not jam. Standards are key to virtually all SDGs, says Jachia, and none of the 17 Goals can be achieved without a large number of standards. She pointed out the significance of standards, using Goals 7, 13, 14, 15, and 17 as examples.

The key standards for Goal 7 (Affordable and Clean Energy) are standards such as standards for rural electrification, for micro-grids, for wind turbines, etc. For example, IEC 61400 is a family of standards related to wind turbines, which allow for a more efficient way of producing energy. There is a large number of standards that help manage environmental responsibilities in regards to environmental goals, Goal 13 (Climate Change), Goal 14 (Life Below Water) and Goal 15 (Life on Land). Such standards help monitor and reduce energy consumption and monitor and reduce emissions into the air and water streams, for example. Many of these standards are developed by the International Organization for Standardization (ISO); for example ISO 50000, which looks into energy management. Goal 17 (Partnerships for the Goals) contains a specific target – Target 17.10 regarding international trade. Standards are the foundation of international trade and help ground an open, non-discriminatory and equitable multilateral trading system.

The SDGs tackle challenges of global proportions and it would be ill-advised to look for solutions that are not globally coherent and globally cohesive, warns Jachia. International standards are developed by experts from around the globe, which is why they provide metrics across sectors and geographical locations. Standards also speak the language of business, as businesses are used to standards, making the possibility of involving businesses in making SDGs a reality. Standards also measure achievements and they will tell us how many indicators we have achieved, and will measure further progress against SDGs.

How standards differ from regulations

How standards are developed: The international standards system

Jachia presented the main standard setting bodies. Some of them, like ISO and the International Electrotechnical Commission (IEC), are like “federations” or networks of national standardisation bodies. Similarly, several regional organisations, such as the European Committee for Standardization (CEN) and the European Committee for Electrotechnical Standardization (CENELEC), bring together European standards bodies. The International Telecommunication Union (ITU), she points out, is different because it is made up by national delegations, but also by other organisations. Some other organisations still, like the Organization for the Advancement of Structured Information Standards (OASIS), work on a membership basis, which is not nationally based. Some UN bodies also have a standards-making role, like the Codex Alimentarius – for food and feed – and the United Nations Economic Commission for Europe – for a number of sectors including automotive. Using the example of ISO, Jachia explained how standards are developed.

The webinar was organised by DiploFoundation and the UN Economic Commission for Europe. Download the presentation, and view the recording of the webinar in which participants took part in a hands-on practical exercise on standardization, and which also tackled a number of questions related to the role of standardisation and regulation, and the impact on small organisations. 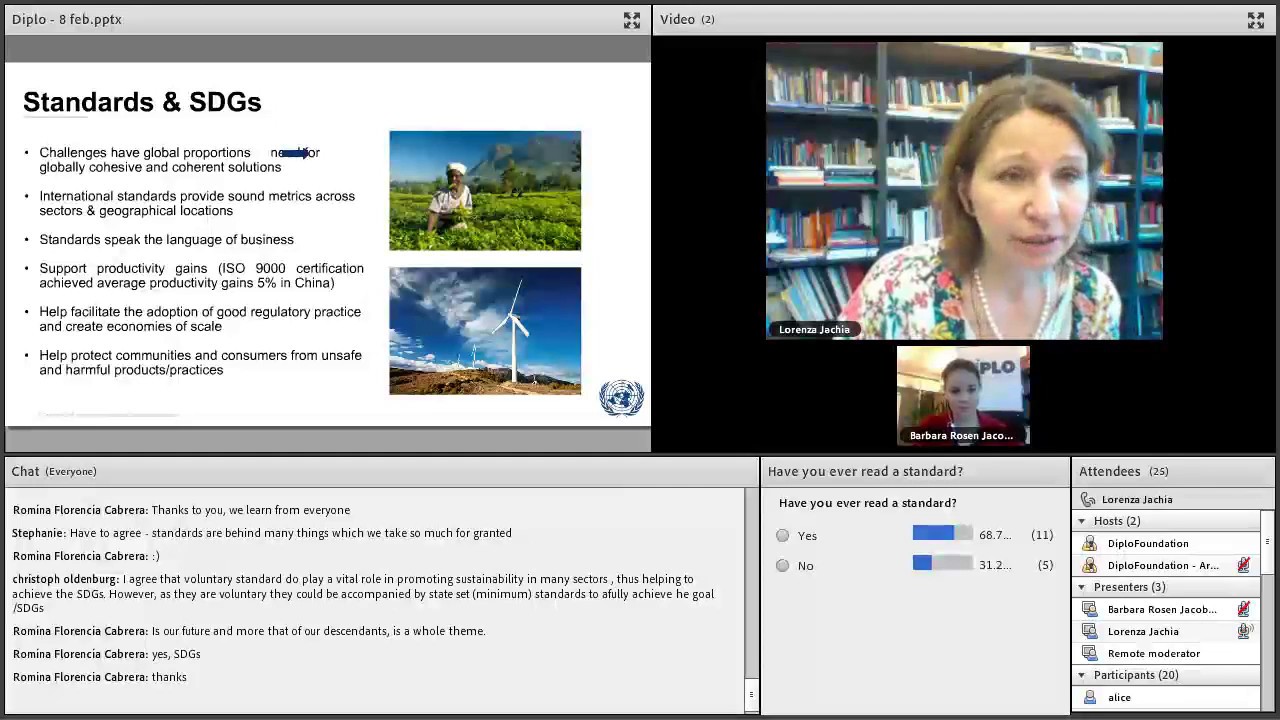 [WebDebate #12 summary] Standardisation: Practical solutions for strained negotiations, or an arena for realpolitik?