You are here: Home1 / Sh*t happens … and matters a lot

Last night I attended the 5th anniversary of the Global Journal in the plush Four Seasons Hotel des Bergues. In front of the hotel on any given day you can see a fleet of Rolls Royces and Bentleys. Some of the guests are wealthier than some countries I know. It is a place of extreme politeness and excessive protocol. You are welcomed by hotel staff with a circular smile – if they didn’t have ears, their smile would circumnavigate their head). All in all it is THE place to be

I was inspired to come because of the guest of honour – former Greek Prime Minister George Papandreu, who is a rare statesman amongst modern politicians, and Jean-Chrisophe Nothias, the owner of Global Journal, who brought a fresh breeze to the Geneva scene by striking a healthy balance between provocation, substance, and hype.

But last evening, I discovered something else, too. Part of the Journal’s event was the award-giving. This well-managed ceremony did not promise anything spectacular; more the usual fanfare of good doers,  sustainable development projects, governance, etc. But the first prize was something else. 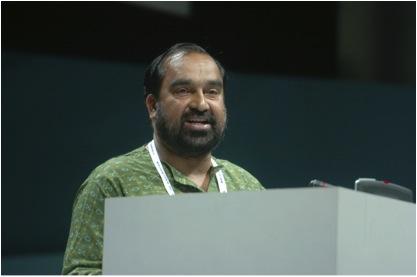 The laureate, Joe Madiath, from the Indian NGO Gram Vikas, started his speech by saying that he was surprised that the first award had been given to … sh*t. He continued with quite a detailed elaboration of his sanitation projects aimed at building toilets in rural India (one tap and one toilet at a time). It’s an impressive project both in its simplicity and its impact! Joe Madiath quite plastically explained that input-output works in humans like anything else.

The Four Seasons is an extremely posh place, full of  rich and important people, and those who would like to be next to these rich and important people. Visitors tend to be detached. It is in the air. And this guy says sh*t! I looked around the room and caught a few seconds of surprise before it devolved into giggles (a classic defense mechanism). The guy went on and on about sh*t… Ultimately he brought the whole room out of our  shells and ready “to accept” that all of us take sh*t.  It lasted five minutes but there was something in the air – the power of the unsaid.

On my way home, two thoughts bothered me. First is the paradox between the extreme politeness of the Four Seasons Hotel Les Berges and the rather impolite word that Joe used: sh*t  [Ed: so impolite that we can’t even bring ourselves to spell it out in full]. Politeness is an important part of our culture and our attempt to upgrade from our animalistic nature. We respect others. We engage others. Politeness and protocol are also rituals which enable us to manage our social contacts. After Joe’s sh*t speech, the atmosphere in the room changed. People were more engaging. People were more direct. Of course, a few drinks helped as well.

The second bothersome thought:  apart from politeness being a layer of our rather animalistic nature, Joe’s speech also made me think of cyberspace. The Internet is often proclaimed as changing the way we live, work, and entertain. Is it really the case? How far are we from our basic human nature? How different are we from our far predecessors who started walking on the steppes of Serengeti? If you looked at human anatomy (size of human brain, our look), we’re not that different.

If  you look at what we do, we are not that different. We love. We hate. We try to protect our family and our friends. Even in this cyber-era, we sh*t,  as our Indian laureate reminded us so vividly last night. The difference is that we use an iPad instead of a newspaper as our toilette reading?

The theme for my next blog will be mapping the Internet to Maslow’s hierarchy of human needs. Be ready for surprises!

Understanding the essence of time

September: The start of the diplomatic year

Standing the test of time

DiploFoundation announces VeriSign fellows to attend 7th IGF meeting in Baku,...Going where the audience is: an insider’s view of Canada’s weiplomacy in...
Scroll to top