You are here: Home1 / Open Data, International Organisations and Governance

“Open Data is a simple concept. Organisations holding datasets should place them online, in machine-readable formats, and under licenses that let anyone re-use them. Advocates explain that this brings a myriad of benefits. For example, rather than finance data being locked up in internal finance systems, only available to auditors, open data on budgets and spending can be published on the web for anyone to download and explore in their spreadsheet software,or to let third parties generate visualisations 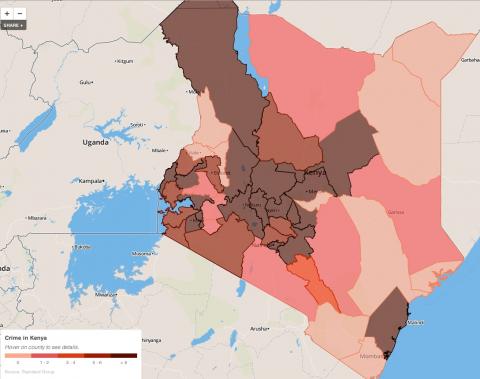 that show citizens where their money is being spent, and to help independent analysts look across datasets for possible inefficiency, fraud or corruption. Or instead of the location of schools or health centres being kept on internal systems, the data can be published to allow innovators to present it to citizens in new and more accessible ways, as illustrated opposite in this crime map of Kenya. And in crisis situations, instead of co-ordinators spending days collecting data from agencies in the field and re-keying the data into central databases, if all the organisations involved were to publish open data in common formats, there is the possibility of it being aggregated together, building up a clearer picture of what is going on”.

We’re fortunate indeed to have Tim Davies presenting on Open Data at the Geneva e-Participation Day: Towards a more open UN. Tim has worked with Diplo since 2009, on remote participation and on using the web to support live online participation in face-to-face meetings such as the Internet Governance Forum. Since then Tim has become increasingly well-known as an innovator and researcher in the fields of Open and Linked data. He works for the World Wide Web Foundation as research co-ordinator of a research programme titled ‘Exploring the Emerging Impacts of Open Data in Developing Countries’, has been involved in UK civil society engagement with the Open Government Partnership, and is an advocate of ‘open data engagement’ as wells as the need for skill building and culture change alongside the release of open data.

The quote above comes from Tim’s blog, introducing some of the ideas he will be talking about on the 19th. And of course the event will have remote participation – so you can register to join in-person or online for free here. As Tim explains, “Open data ideas have been spreading rapidly across the world, with many states establishing national Open Government Data (OGD) initiatives, and International Organisations from The World Bank, to UN DESA, the OECD and the Open Government Partnership all developing conversations and projects around open data. When the G8 meet next week in Northern-Ireland they are expected to launch an ‘Open Data Charter’ setting out principles for high quality open data, and committing states to publish certain datasets.”

While this movement gathers momentum it’s not clear that  MFA and International Organisations are assessing and planning for its potential impact. I’ve written before about how institutions and Departments need to get to a position where they can react rapidly and effectively to information suddenly made available on the web. I quoted this  benign example – an app that takes World Bank and other data relating to the UN Development Goals and visualises progress (at last, a potential competitor to the extraordinary skill and power of Gapminder by Hans Rosling). And as Tim explains, data on aid expenditures, mapped against sectors, organisations and countries, is becoming accessible online to any stakeholders who might be interested in the outcomes, via the Aid Transparency Initiative and others, while the Open Government Partnership is building momentum around issues of transparency. Are Ministries and embassies equipped to engage with and map such data, and prepared to deal with media enquires as they pop up in an innocent blog?

As well as participating in a panel discussion, Tim is also giving time to running a workshop where participants can engage deeply with these and other issues: one not to miss.

The future of work: preparing for automation and the gig economy

No laptops after 7pm