You are here: Home1 / Opening up – how the UN Development Programme is going digital 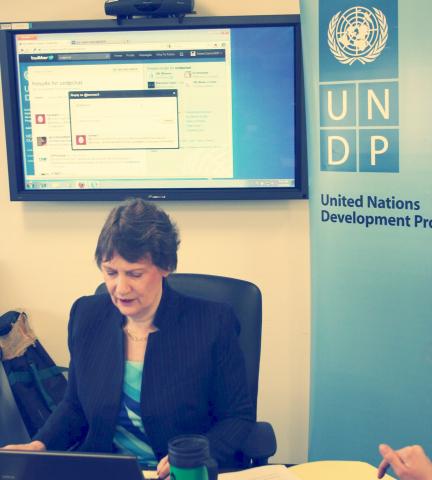 “The growth in social media represents a shift in power from traditional top-down communication to the individual. For the first time in history, anybody (given access to the technology and digital literacy) can potentially make their voices heard and form online communities from which they can translate their power to offline action. This is a great opportunity for the development community to open up, get constructive feedback for projects, collaborate but also advocate better for its causes by showing the human side of development – from the people that receive aid to the development professionals.”

Towards an interactive development programme

UNDP has been spear-heading a significant cultural change within the development community by embracing social media not just as a means to broadcast its own institutional messages but to actively encourage staff members to engage in a two-way conversation with stakeholders, find out what people are talking about and what their needs are. Our chief Helen Clark (@HelenClarkUNDP, pictured opposite) is taking the lead by engaging in virtual conversations with the public on Facebook, Twitter and Reddit. She listens and responds to those that address her via social media daily on her Twitter account in regular Twitterchats

and is actively supporting the use of social networks across UNDP, for example when she visits our country offices or meets other UN officials. This has contributed to an increase in micro-bloggers at UNDP – most of our top level managers such as the heads of external relations and advocacy (@SigridKaag) and development policy (@Olavkjorven) as well as over 150 tweeting staff members are using Twitter. In addition, more and more colleagues contribute blog posts to UNDP’s corporate blog Our Perspective and regional blogs like Voices of Eurasia and Blog Humanum.  Furthermore, the public has the opportunity to directly engage with UNDP through interactive events which are live streamed and live tweeted.

UNDP has also recognized that in today’s connected world, citizens and member states want accountability and value for their money. To this end, UNDP has launched a transparency portal open.undp.org, which provides detailed information on the UNDP’s 6,000+ development projects in 177 countries and territories worldwide. UNDP was also recently chosen to co-host the secretariat of the International Aid Transparency Initiative (IATI) – a further sign of our commitment to publishing comprehensive, quality and timely information about aid flows and results.

Resisting the resistance to culture change

A key challenge at UNDP is overcoming the resistance to the culture change which the move towards an open and transparent organization represents. Questions are still raised about the value added of the use of social media as personnel are worried about losing valuable work time or fear that UNDP opens itself up for criticism. The advance of social media is similar to the introduction of email in the early 1990s: Many organizations feared the loss of control over messaging, branding and the flow of information. Nowadays, a world without email communication at work is unthinkable.

The benefits and opportunities of using social media to connect with the outside world are much higher than the risk of a staff member ruining UNDP’s reputation by publishing a critical blog post. As a matter of fact, I see the risk that staff members are much more inclined to avoid social media for fear of embarrassment or wrongdoing rather than using it for their own or the organization’s advantage. In the case of UNDP, this would represent a missed opportunity of 8.000 people who can advocate and engage on UNDP’s behalf. And self-control mechanisms are already in place: Staff are highly aware that what they tweet or blog can be traced back to them.

Therefore, clear rules and guidelines are needed to limit the pitfalls, lower potential risks but also motivate colleagues: Apart from official statements by designated spokespeople and senior officials, it has to be clear to UNDP staff members, that whatever they say in public or online will be affiliated with UNDP. As international civil servants they should follow UN staff rules and codes of conducts. This includes their obligation to act with integrity, professionalism, impartiality and neutrality and to respect diversity.

There are many arguments in favor of increasing and encouraging the use of social media: Rather than adding an extra burden, social media can help make work more efficient. Staff can get answers to professional questions, a sense of what stakeholders really think, new ideas, public support and possibly even secure funding for UNDP. The use of social media has so far been highly beneficial for UNDP: We have built a large global community of online supporters, used new innovative tools in our projects to increase development impact, forged new partnerships such as the Social Good Summitand improved old ones and have raised awareness for our core issues: The UN-wide #MDGMomentum Twitter photo rally was one of the most recent examples of such a successful UN-wide social media campaign raising awareness for the 2015 target date for achieving the Millennium Development Goals. We received 120 photos showing progress on the MDG that were viewed over 5.600 times.  All in all 15.146 individual contributors generated 35.000 tweets using #MDGMomentum, reaching 57 million unique Twitter accounts.

However, there’s still much to do to achieve a fully open and transparent development programme: We need to progress from just listening and responding to what people are saying to reacting to what we hear by consistently incorporating feedback into our policies and projects. Furthermore, social media is not just about tools and platforms – communication paradigms have changed. Everybody needs to know how to communicate and use these tools strategically/professionally, as my colleague Blythe Fraser has wisely pointed out in this Guardian debate on social media and development. Not only the communications officers, but also UNDP’s experts need to reply to substantive questions and engage with the public in real time. For that, we have to provide them with training opportunities to ensure that they feel comfortable with the tools as well as with writing in public. Lengthy clearance and approval processes are inadequate in a digital world.

To really tap into the power of social media, we will need to overcome fears of losing control and empower our staff to use social media themselves. I concur with Duncan Green who says that organizations need to move ‘from permission to forgiveness’.

Do you agree? What else needs to happen? Does anyone have any examples of how big, bureaucratic organizations successfully opened up, and what made it possible?

e-diplomacy in a lego world

Open Data, International Organisations and GovernanceRemote Participation in the ITU
Scroll to top