You are here: Home1 / Embassy buildings: fortresses or bazaars?

The recent attacks on diplomatic missions in the Middle East have brought into focus the discussion on embassies and the tension between their function and protection. It reminds me of sessions in the early 1990s when I assisted young Maltese architectural students to design an ideal embassy for a pan-European architectural competition. They found  my explanation of diplomacy  as a profession that builds bridges between nations through engagement and dialogue counter-intuitive. Most embassies are surrounded by high walls and guarded by heavily armed soldiers. They are far from open and inviting spaces. The embassy architecture symbolises in physical form the tension in the function of diplomacy as well as tensions in global politics. 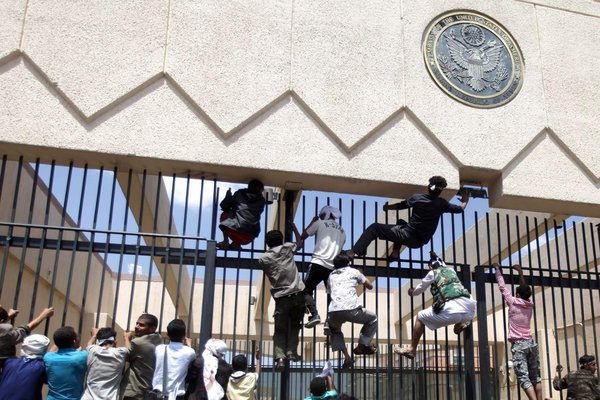 Since the 1990s, especially after 9/11, the situation has deteriorated. Today, embassies, in particular US embassies, are fortresses. Walls around them are higher, although not high enough to protect them from attack. As the former US ambassador Edward P. Djerejian said  ‘we built a 16-foot wall, but there is such a thing as a 17-foot ladder.’ The numbers of security guards in the US embassies alone have multiplied to 40.000 worldwide.

US diplomats are uneasy about this ‘embassy fortress’ that makes their job of engaging with locals more difficult. With more diversified politics, diplomats cannot just maintain relations with local government officias. They have to engage with people in all walks of life, including journalists, business people, and university professors. In a sobering twist of fate, the day after he was killed, the US ambassador in Bengazi was supposed to go to the hospital and discuss a new programme for emergency medicine with Libyan doctors.

Faced with the paradox of needing to engage while maintaining security, some countries use eDiplomacy intensively. It is not surprising that the USA and the UK, countries with the highest security risks, are among the most advanced users of eDiplomacy. What cannot be done in the local streets, bars, and bazaars because of security risks, eDiplomats try to do on Facebook, Twitter, and blogs. The problem is that in societies such as Libya, where diplomacy is most needed, social contacts over tea and coffee matter more than posts on Facebook or Twitter.

Physical embassies will remain important in the Internet era. Embassy architects will be even more challenged to design an engaging and communicative function of diplomacy, while factoring in the need to secure the building from potential attack.

Can we imagine a day when embassies will be located at local bazaars, where people mingle and interact freely? It would certainly signal a return to diplomacy’s original and core function.

In the meantime, as embassy architects try to combine a fortress and a bazaar in one building, I wonder whether it is, in fact,  a case of  ‘mission impossible’?

Is it time for a review of the Vienna Convention on Diplomatic Relations?

Some thoughts on public diplomacy, social media, and data

169 – Farewell to longhand?[Brussels e-briefings] Can Angela Merkel save the EU?
Scroll to top