Starting on 8 May 2017, we offer courses on diplomacy topics, both classic and contemporary:

Apply by 6 March 2017 for University of Malta accredited courses and by 3 April for Diplo certificate courses. For further information or to apply, click on the titles of the courses listed, or visit our courses webpage. Register now to reserve your place.

Thanks to support from the government of Malta, partial scholarships are available for applicants from developing countries to attend upcoming Diplo online courses. These scholarships cover 30-70% of course fees and can be applied to most online courses in 2017.

The Model ASEM Switzerland Spin-off 2017 was a one-day political simulation of the Asia-Europe Meeting (ASEM) Summit. On 1 March, some sixty students from Swiss universities took on the roles of national delegates for a round of simulated (ASEM) negotiations hosted by the Swiss Federal Institute of Technology of Lausanne (EPFL). The event was organised to mark Asia meets Europe/Europe meets Asia Day and was conceptualised by the Federal Department of Foreign Affairs of Switzerland in partnership with DiploFoundation, the EPFL College of Humanities, EPFL Model United Nations, and the Asia-Europe Foundation to give young people the opportunity to experience first-hand how multilateral discussions are carried out and to make practical recommendations to ASEM members. ASEM is a process of dialogue and cooperation bringing together the 28 EU member states, 2 other European countries, and the EU with 21 Asian countries and the ASEAN Secretariat. The ASEM dialogue addresses political, economic, and socio-cultural issues in an informal setting, with the objective of strengthening the relationship between the two regions, in a spirit of mutual respect and equal partnership. You can read more about this and other Diplo activities in the Asia-Europe context.

Qualified candidates from the Pacific islands are still welcome to apply for travel funding to attend UN meetings in Geneva throughout 2017 as part of the Capacity Development in Multilateral Diplomacy (CD Multi) project . The project is supported by the governments of Switzerland and Malta. Read more about how to apply.

[WebDebate] Diplomats as writers: Marrying the arts and diplomacy

Diplomats make a considerable contribution to literature and cultural heritage. This, however, remains underexplored despite the fact that eight diplomats have been awarded the Nobel Prize in Literature. The March WebDebate, on Tuesday, 7th March at 12:00 UTC (13:00 CET), will explore the contributions of diplomats to literature and cultural heritage and look at how art and diplomacy can be usefully combined. What can we learn from diplomats who also engage in the arts? What role does creativity play for diplomacy? Are there any overlaps between poetic and diplomatic language? Are there certain lessons in the diplomatic craft that can only be expressed through literature and art? Can we usefully marry the arts and diplomacy and if yes, in what ways? Learn more and register.

Monthly briefing and newsletter round up Internet governance developments in February 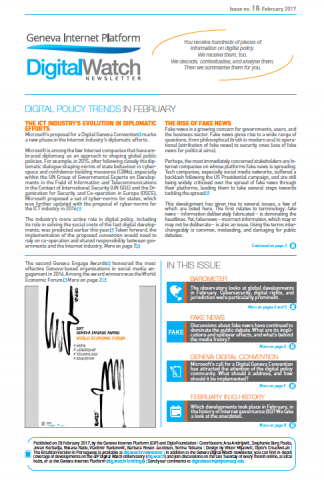 New study: Towards a Secure Cyberspace via Regional Co-operation 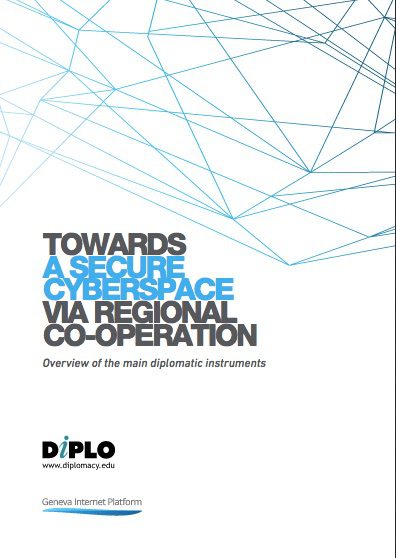 In response to increasing cyber-armament, diplomatic initiatives have emerged attempting to codify state behaviour in cyberspace and encourage co-operation to reduce the risk of conflicts. The study Towards a Secure Cyberspace via Regional Co-operation provides an overview of the international dialogue on establishing norms of state behaviour and confidence-building measures (CBMs) in cyberspace. The study was published by DiploFoundation in partnership with the Geneva Internet Platform (GIP) and with the support of the Swiss Federal Department of Foreign Affairs (FDFA). It offers a comparative analysis of the leading international and regional political documents outlining cyber-norms, CBMs to reduce conflict stemming from the use of ICT, and capacity development efforts to strengthen co-operation on cybersecurity. It discusses how these elements could further influence each other, and notes several specific directions that further developments could take. Read more about the study and download the full version.

Fake news in the digital era

Fake news has become a cause for concern. With the growth of social media, fake news has proliferated, as it has found a platform to disseminate stories to a massive audience. The GIP Digital Watch observatory is exploring the impact of fake news on digital policy, and tracking the latest developments on how stakeholders are tackling the issue of fake news. Visit the dedicated space.

What’s been happening in Diplo’s blogsphere

In a series of three blog posts, Diplo’s Vladimir Radunovic looks at questions of cyber armament. In the first post, Radunovic looks at cyber armament as a growing trend and discusses a number of recent cyber attacks. The second post highlights diplomatic initiatives to address questions of cyber attacks and armament. The third post discusses the role of the private sector. In Digital Geneva Convention: multilateral treaty, multistakeholder implementation Diplo’s director Dr Jovan Kurbalija tackles the question, raised by a recent proposal by Microsoft president Brad Smith, of establishing a more secure and stable Internet and a stronger future cyber governance architecture.