You are here: Home1 / Visit to Bern and Presentation of policy research projects

Visit to Bern and Presentation of policy research projects

In his welcoming remarks at the roundtable discussion convened in Bern 23 June on issues and challenges facing small island states, Ambassador Jürg Lauber described International Geneva as Switzerland’s contribution to the international community. He was addressing a group of ten delegates from the Pacific Islands, who were in Geneva as part of the policy immersion phase of CD Pacific, a capacity development programme in multilateral diplomacy for Pacific Islands states, run by DiploFoundation and supported by the Swiss Ministry of Foreign Affairs. 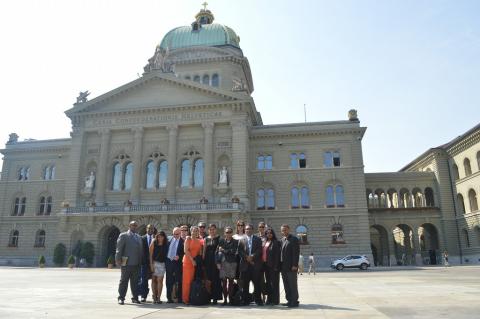 The programme brought together diplomats with diverse interests and areas of focus and through online training in the six key global policy areas covered by Geneva, followed by development of a research policy paper, and culminating in the 10-day policy immersion programme in Geneva.

Ambassador Lauber noted how the issues raised by participants in their policy papers were issues being covered in Geneva. And, in keeping with one of the main principles of Swiss foreign policy – universality – Switzerland is committed to supporting capacity development in the region.

Were we to liken multilateral diplomacy to an entrée, it might be said that the dish is prepared in Geneva and served in New York, such is the importance of Geneva in global policy-making circles. Focus on increased participation for small island states is pointing towards the upcoming SIDS conference in Samoa. DiploFoundation is committed to playing its part in maintaining the momentum, particularly in the lead-up to the CHOGM meeting in Malta. We are in the process of planning research on small developing states and their representation in UN bodies in Geneva, which we hope will create positive competition among International Organisations regarding what mechanisms of support they provide to SIDS.

The event concluded with a lecture by Ambassador Beat Nobs on Swiss Asia-Pacific policy. Ambassador Nobs, being no stranger to the region, provided an insightful view of the way forward.

The first month of COVID-19 in Trinidad and Tobago