You are here: Home1 / Internet governance developments in March

The IG Barometer for March showed that the past few weeks were more intensive for online privacy and data protection, net neutrality, jurisdiction, and the IANA transition process, compared to previous weeks. 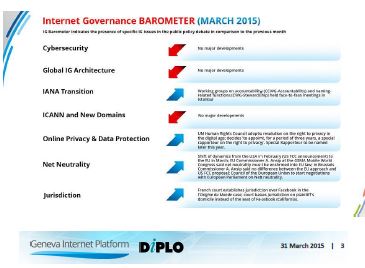 The March IG briefing was delivered in Geneva by the Geneva Internet Platform, and simultaneously as a webinar for online participants.

It was a quiet month for cybersecurity, in which no major incidents were recorded, Diplo’s Cybersecurity director Vladimir Radunovic explained. At a national level, the UK government signed an agreement with insurance companies aimed at making the UK one of the safest online environments for businesses. With this development, cybersecurity is being seen as a business opportunity, and not only as a threat, Radunovic explained, despite the fact that as much as 80% of large businesses and 60% of small and medium enterprises (SMEs) in the UK have suffered a cyberattack in some form.

While discussions on the global IG architecture were not as intensive as in the first two months of the year, Kurbalija predicted that developments will accelerate with the WSIS+10 negotiations over the next few months.

An interesting development was the working-level Inaugural Meeting of the NETmundial Initiative, held at the end of the month, at Stanford University. The outcome was a draft terms of reference which is open for public comments.

Richard Hill from the Association for Proper Internet Governance, who was present at the briefing in Geneva, explained that the Internet Social Forum was presented during the World Social Forum, held in Tunis on 24-28 March 2015. The statement is available.

Ironically, Kurbalija observed, the more inclusive a process is, the more complex it becomes. The working groups created as part of the IANA Transition and ICANN Accountability processes – initiated after the NTIA announced on 14 March 2014 that it intended to transition its oversight of key Internet domain name functions to the global multistakeholder community by 30 September 2015 – created a complex process of discussions and working plans.

Joining remotely, Desiree Milosevic from Afilias, and board member of ICANN’s European Regional At-large Organisation, who participated in the CWG-Stewardship Istanbul meeting, said that the crux of the meeting was how to strengthen the existing independent review process, and how to empower the community through various mechanisms.

Milosevic said that the work of the two working groups needed to run in parallel, and that the chairs needed to work closer together.

A lot of progress was made by CWG-Stewardship, including that of the Design Teams, with the group agreeing that the legal council should now focus on the ‘internal model’, where functions would be performed by internally organised substructures within ICANN. It is expected that the process will conclude by the set timeframes. (Read more about the IANA Transition process and ICANN Accountability process on the Geneva Internet Platform website.) 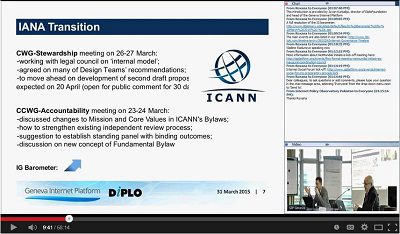 With regard to online privacy and data protection, the UN Human Rights Council has adopted a resolution on the Right to Privacy in the Digital Age (A/HRC/28/L.27) in which it has decided ‘to appoint, for a period of three years, a special rapporteur on the right to privacy’.

Kurbalija explained that in a way, this could be seen as the result of a long process, initiated by Germany and Brazil at the UN General Assembly in November 2013, with the debate moving to the UNHRC, concluding with the establishment of Special Rapporteur. The major focus during the negotiations was on how much of ‘digital’ will be in the resolution.

A few other developments on online privacy and data protection took place at national levels.

The FCC’s rules on net neutrality, which came to a vote in February, were published in a 400-page document. Radunovic explained that the regulations will strongly protect net neutrality in that paid prioritisation of online content from service providers to end-users will be prohibited. However, the regulations leave room for possible specific agreements between telecom providers (e.g. AT&T and Verizon) and content providers (e.g. Google and Netflix). This allows the option for specialised services, which would be modelled separately, but the FCC would monitor any agreements that come close to paid prioritisation.

A similar trend has emerged in Europe in discussions on the telecoms package, Radunovic explained, with EU Commissioner Andrus Ansip recently stating in Brussels that the EU approach was similar to that of the USA. In fact, it seems that specialised services will also be allowed in the EU, although it is as yet unclear how the negotiations will unfold.

These developments demonstrate that decisions in Europe on issues like jurisdiction and privacy are expected to have an impact on a broader level, whereas issues like net neutrality are largely affected by developments in the USA.

There are four main events taking place in April:

On 12-19 April, the Thirteenth UN Congress on Crime Prevention and Criminal Justice will take place in Doha, Qatar. Taking place every four years under the auspices of the UNODC, the conference is expected to discuss whether the Cybercrime Convention can be expanded to cover other cybercrime issues.

On 16-17 April, the Global Conference on Cyberspace 2015 will take place at The Hague, the Netherlands. The conference will convene governments, civil society, and corporate sectors. The focus will be on cybersecurity, economic developments, and human rights. The outcome is expected to be the launch of a Global Cyber Resilience Initiative, where partners can share their cyber expertise and collaborate.

The IANA Transition Naming Community is expected to publish its second draft proposal on naming-related functions on 20 April, which will be open for public comment for 30 days.

On 27-29 April, the Summit on the Multilingual Digital Single Market will take place in Riga, Latvia.

Three main Geneva Internet Platform events took place in March. Kurbalija was on a lecture tour in Asia 12-17 March (read the day-by-day account of the lecture tour which took place in Kuala Lumpur on 12 March, Singapore on 13 March, Bangkok on 16 March, and Jakarta on 17 March), and in New York on 26 March for a discussion on A Digital Magna Carta, organised by the New America NYC (read Kurbalija’s reflections on A digital magna carta between two doors, first published in the Huffington Post on 4 April).

The second Cybersecurity Day on Fighting cybercrime through international cooperation was held in Geneva on 30 March (read the report from the event).

An interesting outcome of one of the Asian training sessions, attended by European and Asian diplomats in the context of the upcoming Asia-Europe Summit in 2016, was the concept of a Digital Silk Road. The concept refers to railroads between Shanghai and Madrid, with a connection to Rotterdam, along which Internet cables could be laid.

Over the next few months, the Geneva Internet Platform will be organising an online course for Geneva-based diplomats on Internet governance, which starts on 20 April, while a seminar on current developments in MIKTA diplomacy and vision for the future will take place on 24 April. The seminar is a follow-up to a first event held last year, and aims to generate input to preparations for the Ministerial MIKTA meeting to be held in Seoul in May. The event will include a discussion on MIKTA’s potential in disaster risk reduction and cybersecurity.

The next briefing, Internet governance in April 2015, will take place on 28 April. Read more and register to participate online or from Geneva. 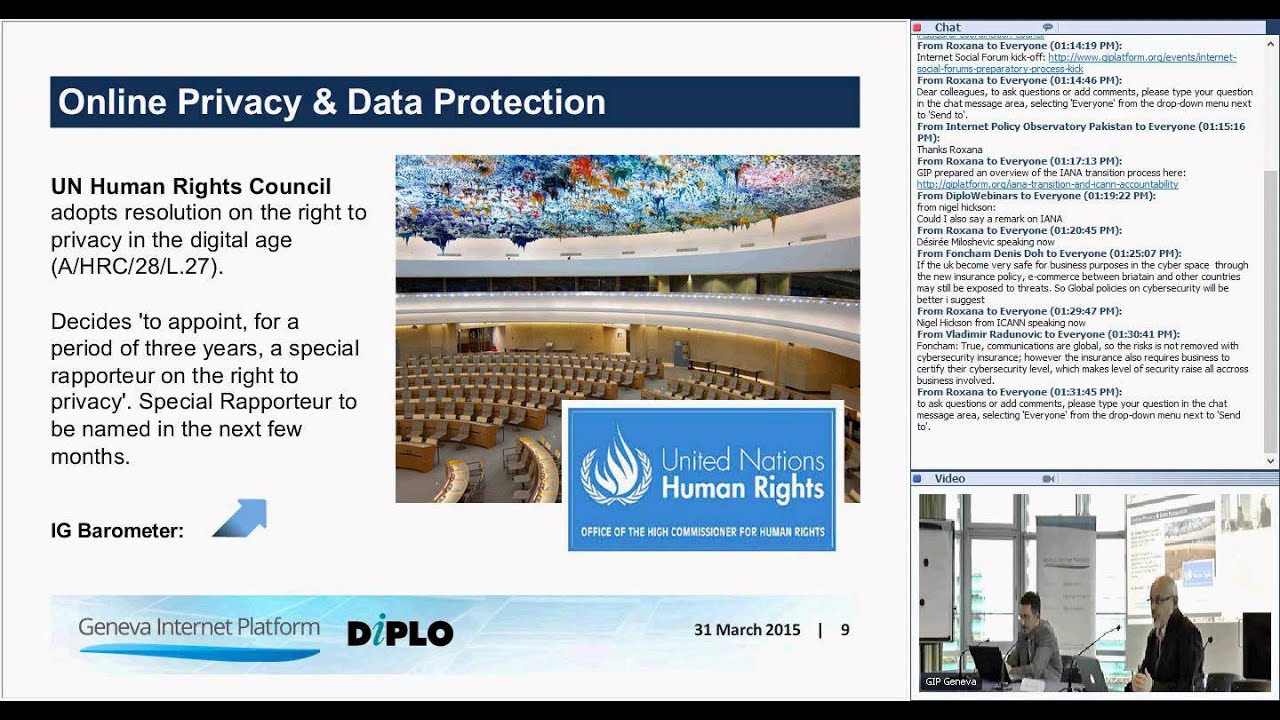 View or download the presentation. You can also view the photo gallery for the event. We invite you to join us next month, online or in Geneva, for another Internet governance briefing; registrations are now open.