What would you like to see more of on the Diplo website, and how do you think we can improve it? We picked up momentum during 2013, in terms of traffic and content, learning a lot of useful lessons about how we can increase the value of the material we provide online through the site (we summarise the main points below). We launched the new site in December 2011 and we want to continue improving. We need to hear from you about how what we could do to provide a better service, in support of Diplo’s core mission. And as issues relating to Internet Governance (IG) move back up the international agenda it’s even more important that we are able to provide an space for sharing ideas, information and opinions, especially since the IG audience is probably Diplo’s strongest, according to the statistics. So please help us and take five minutes to complete the survey.

What have we learnt? 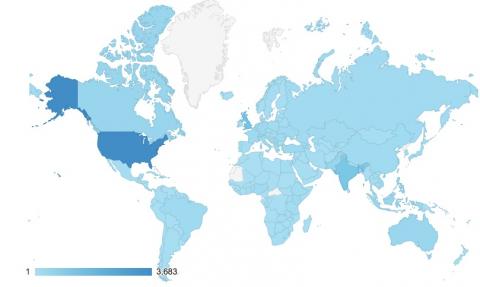 Predictably, Diplo’s audience is worldwide, with particular concentrations in the US, UK, India, Pakistan, Phillipines, Canada, Indonesia, Australia and Switzerland. One of the findings from the analysis of 2013 data is that collaborating with other organisations around events is an effective way to concentrate communication interest, as we did for the Geneva e-participation day, for example. So it’s gratifying and interesting to see so many visitors from places where Diplo hasn’t actually organised or been a partner in events. The pattern must instead reflect the influence of Diplo alumni and faculty.

Overall there were 70% more visitors in general compared to 2012, and from September onwards we often had more than 1000 visits per day.  That was partly a result of specific items, such as one or two blogs for example, attracting large audiences. As well as the overall quality and interest of the writing, this finding is influenced by those of our guest bloggers who already have large followings online but also because we have been building connections in social media. Overall, Twitter and Facebook are bringing more and more visitors (73% and 58% more than in 2012). And it’s important to note that our accounts on Twitter, Facebook and LinkedIn have steadily grown their connections and engagement with interested audiences. @eDiplomat, in particular, has passed the five thousand follower mark – a great achivement. Developing and maintaining social media conversations is an end in itself, and a lot of chatter simply stays in those spaces. But in terms of the web, and making connections between all strands of Diplo activity, encouraging traffic back to the site remains a key goal. However, to put that in context, like most sites Google is by far Diplo’s largest source of visitors (60%).
Overall, the larger number of visitors were visiting marginally fewer pages per visit and, in general, people tend to come into the site for one visit, such as to a course page or a blog post, and then leave after they have seen that page. On the one hand, that is a logical outcome but, on the other, there’s a lot of content on the site which can inform visitors. So one of our targets for this year is to find ways to increase engagement – the Holy Grail of online sites. Do you have any ideas? One of our questions is whether to increase the amount of cross-linking material on sites, moving away from the ‘clean, uncluttered’ design we began with: does that make sense?
So please, help us develop a site that is more useful to you – just five minutes of your time on this survey.

The economic impact of data centres

Guest blog: Diplomats need to be able to talk to locals, not just leaders[Guest post] 140 characters or fewer: simplifying the message
Scroll to top