You are here: Home1 / Dag Hammarskjöld: A United Nations legend. The rest is poetry.

Dag Hammarskjöld: A United Nations legend. The rest is poetry.

At present, with a bit of effort, the media can fabricate ephemeral legends daily. But the genuine legends are those that outlast the tests of time and the winds of history.

In the United Nations few legends remain despite the hard work done by the organisation and some of its servants in its 68 years of existence. One such legend is Dag Hammarskjöld, the second Secretary-General of the United Nations. 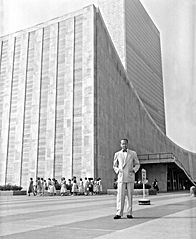 Dag Hammarskjöld outside the UN building (1953). By UN/DPI [Attribution], via Wikimedia Commons.

He is credited, together with the Canadian Lester Pearson, for the first major institutional innovation outside the stricto sensu provisions of the UN Charter: the peacekeeping operations. Despite the straightjacket provided by the Charter for the Secretary-General,1 he proved strong leadership and took initiative in various crises related to the Suez Canal, Korea, and Rhodesia, or against apartheid in South Africa. The proactive, determined policy of Dag Hammarskjöld on Congo attracted fierce opposition from the Soviet Union. Both he, as an individual, and the institution of the Secretary-General, were targets of Soviet criticism.

They laid the blame on him.
He didn’t know what it was,
But he confessed it.

The Soviet government went as far as to propose that the whole structure of the Secretariat and of the Secretary-General be changed into a Troika formula: one representative from the West, one from the communist group, and one from the non-aligned countries. If it were not for his tragic death in 1961, Dag Hammarskjöld might have followed the fate of his predecessor, Trygve Lie, who was forced by the same Soviet Union to resign before the end of his term in office.

Like the bee, we distil poison from honey for our self-defence. What happens to the bee if it uses its sting is well known.

Certainly, his death on duty, on 18 September 1961, en route to cease-fire negotiations, contributed to his aureole as a legendary Secretary-General. And, as if this was not enough, his personal diary was found in his New York home after his death. It contained personal reflections on life, nature, faith, and fate, as well as poetry in many forms, including haiku and elegies. They were compiled in 1963, and subsequently translated into English.2

Curiously enough, although Dag Hammarskjöld added notes in his diary throughout his entire career as Secretary-General, there is no single direct reference to his work.

Let them keep
All the petty secrets
They have guarded so anxiously.

Indeed, this additional touch of mystery incites the reader of his diary to find allusions and premonitions. It is what I did. All the associations with the insertions in italics have nothing to do with the intentions of Dag Hammarskjöld. They are the fruit of my imagination and improvisation. One such connection is inevitable:

Do not seek death. Death will find you. But seek the road which makes death a fulfilment.

Some of his thoughts were quite paradoxical for a man who became Secretary-General of the United Nations:

It is more noble to give yourself completely to one individual than to labour diligently for the salvation of the masses.

What must come to pass should come to pass. Within the limits of that must, therefore, you are invulnerable.

Another one contradicts the very life of Dag Hammarskjöld:

After all, this strange combination of his individual spirituality and his job as Secretary-General makes Dag Hammarskjöld a distinctive personality among other mandate holders, including all his successors who wrote their memoirs.

[1] United Nations Charter, Article 97: ‘He shall be the chief administrative officer of the Organization.’
[2] Dag Hammarskjöld (1964). Markings. London: Faber and Faber.