You are here: Home1 / [Webinar summary] What is the role of civil society and communities towards...

[Webinar summary] What is the role of civil society and communities towards a peaceful cyberspace?

The Geneva Internet Platform (GIP) organised a webinar entitled ‘What is the role of civil society and communities towards a peaceful cyberspace?’ within the framework of the Geneva Dialogue on Responsible Behaviour in Cyberspace, led by the Swiss Federal Department of Foreign Affairs (FDFA), in co-operation with the GIP, the United Nations Institute for Disarmament Research (UNIDIR), ETH Zurich, and the University of Lausanne.  This webinar was the second in the series, building upon the first webinar, ‘What is responsible behaviour in cyberspace?’. In the discussion moderated by Mr Vladimir Radunović (DiploFoundation), Mr Serge Droz (FIRST/ICT4Peace) and Ms Lea Kaspar (Global Partners Digital) discussed the roles of civil society and the technical community in ensuring international peace and security through responsible behaviour in cyberspace. They linked these roles to norms development processes, confidence building measures, and to the work of the United Nations Group of Governmental Experts (UN GGE) on Developments in the Field of Information and Telecommunications in the Context of International Security in particular. The participants also discussed the functions of civil society and the technical community in ensuring the peaceful use of cyberspace.

The diversity of civil society and the technical community

Explaining why the technical community is discussed separately from civil society, Radunović pointed out that communities around ISOC, IETF, ICANN or CERTs do not necessarily see themselves as a part of civil society.

Is there a place for civil society and the technical community in international peace and security in cyberspace?

In the sphere of traditional international peace and security, civil society already has a role in norms development as well as in the implementation, enforcement and operationalisation of norms, Kaspar noted. She stated that it may be argued that having non-governmental stakeholders involved in cyberspace and Internet related policy is needed due to the nature of cyberspace. It is impossible to secure the network systems without the involvement of the technical community and without the private sector which owns most of the infrastructure, meaning that there is a clear role for these two stakeholders groups in the implementation and operationalisation of norms. Civil society should also have a role in cyberspace, Kaspar stressed, which has already been reinforced in a number of international commitments, including the UN GGE 2015 report. However, norms development seems to be under the purview of governments, Kaspar noted. She highlighted that according to the ‘Tunis agenda for the information society’, civil society has an important role in Internet matters, especially at the community level; which she considered a limited and narrow understanding of the role of civil society. Kaspar stated that there is an inherent tension between principles that underpin discussions about international peace and security. These principles are – on the one hand, the sovereignty of nation-states, and on the other, the multistakeholder approach, openness and interoperability – principles that are considered a given in Internet governance. In bringing civil society into the discussions, Kaspar noted that there is an important distinction between having an independent seat at the table for non-governmental stakeholders, a horizontal integration of non-governmental stakeholders and discussions either through consultations or advisory bodies, and a vertical integration of stakeholders within delegations of nation states where civil society organisations cannot have an independent position outside of the position of that government.

Kaspar stressed that it is important not to forget the role of civil society in the development of policies and norms. However, she also underlined the importance of the operationalisation of the multistakeholder model – once the norms are developed, there is a number of functions that non-governmental stakeholders will have to play. These functions can be categorised in different ways: e.g. awareness-raising, capacity-building, research and education, holding the government to account to their commitments; or effective engagement in developing the policies, transparency and accountability, and deepening knowledge.

According to Kaspar, in the UN GGE 2015 report, the norm which leaves the most space for the engagement of independent civil society organisations is norm 13(e), which stipulates that states must guarantee full respect for human rights.The importance of independent organisations who play a role in making sure that governments are accountable and have obligations under the International Human Rights framework is clear. Civil society also has an important role in education, awareness raising and research. Kaspar stated that if the security of a system is as weak as its weakest link, and the weakest link is the user, then the role of civil society for capacity building, digital security training, and building cyber hygiene is obvious. Civil society also has an important role in developing norms and the operatisationalition of norms related to critical infrastructure.

Kaspar stated that the role for civil society is to participate in developing the framework that will be used in case of an incident response by other stakeholders.

Radunović pointed out that in case of a critical infrastructure attack, civil society can help governments with informing and warning people, as it has a huge outreach and reacts quickly in disasters. Civil society can also play an important role in ‘track 2’ dialogues among states, which can reduce tensions and prevent misunderstandings and possible cyber-incidents.

There is a need for more multistakeholder dialogues on these topics, and for governments to be present in the discussions of other stakeholders. The Geneva Dialogue on Responsible Behaviour in Cyberspace was recognised as one such venue with potential, and its continuing work is welcome by the participants.

Ensuring that civil society’s voice is heard in ICANN 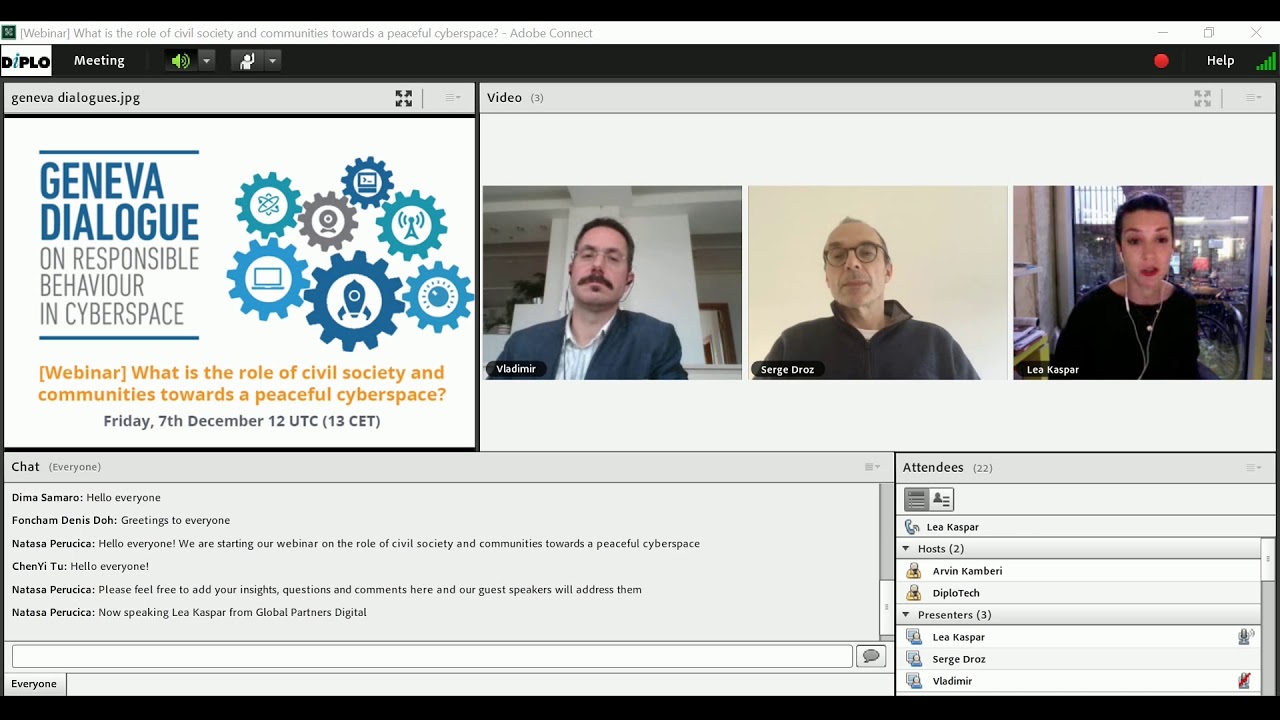 Internet governance in November 2018[WebDebate #26 summary] AI on the international agenda – where do we go...
Scroll to top