You are here: Home1 / Internet governance in November 2018

An abundance of new cybersecurity declarations and resolutions, calls for ethical considerations in artificial intelligence (AI) systems development, and new rulings regarding the gig economy were among the main digital policy developments in November 2018.

These and many other developments, trends, and regional updates were covered during November’s just-in-time briefing on Internet governance – our monthly appointment on the last Tuesday of every month – which took place on 27 November 2018. They were also summarised in the Internet Governance Barometer for November, and in Issue 36 of the Geneva Digital Watch newsletter, published on 7 December 2018.

Mr Vladimir Radunović, director of cybersecurity and e-diplomacy programmes at DiploFoundation, highlighted some of the events held in November 2018, including the 13th Internet Governance Forum (IGF) and the ITU Plenipotentiary Conference.

An overview of top trends in digital policy in November followed.

3. Gig economy is in focus again, explained Ms Marilia Maciel, digital policy senior researcher at DiploFoundation. The gig economy is characterised by a labor force that has different types of contracts which are temporary, regulating a very flexible relationship of work. There is a growing realisation that current labor laws are not fit to protect workers in the gig economy.

The next Internet governance briefing is on 29 January. Registrations are open.

Radunović spoke about the upcoming events in December, including the G7 Multistakeholder Conference on Artificial Intelligence, the Africa eCommerce Week: Empowering African Economies in the Digital Era, and the OECD Global Forum on Digital Security for Prosperity.

Shita Lakshmi provided an overview of updates from Asia, including the signing of the ‘ASEAN Agreement on Electronic Commerce’ by ASEAN leaders to create a conducive environment for e-commerce in the ASEAN region; research conducted by the BBC indicated that nationalism is behind disinformation in India.

Grace Mutung’u provided updates from Africa, focusing on the African IGF 2018, the activities of the African regional group during the ITU Plenipotentiary Conference 2018, and the first data protection summit for Africa organised by the Mauritian Data Protection Authority .

Noha Fathy provided updates from the Middle East and North Africa (MENA) region, covering the improvement and decline of Internet freedom in the MENA region per the ‘Freedom on the Net 2018’ report, and EU officials being urged to address Turkey’s freedom of expression crisis during the EU-Turkey high-level political dialogue.

The fight for net neutrality (webinar digest and video) 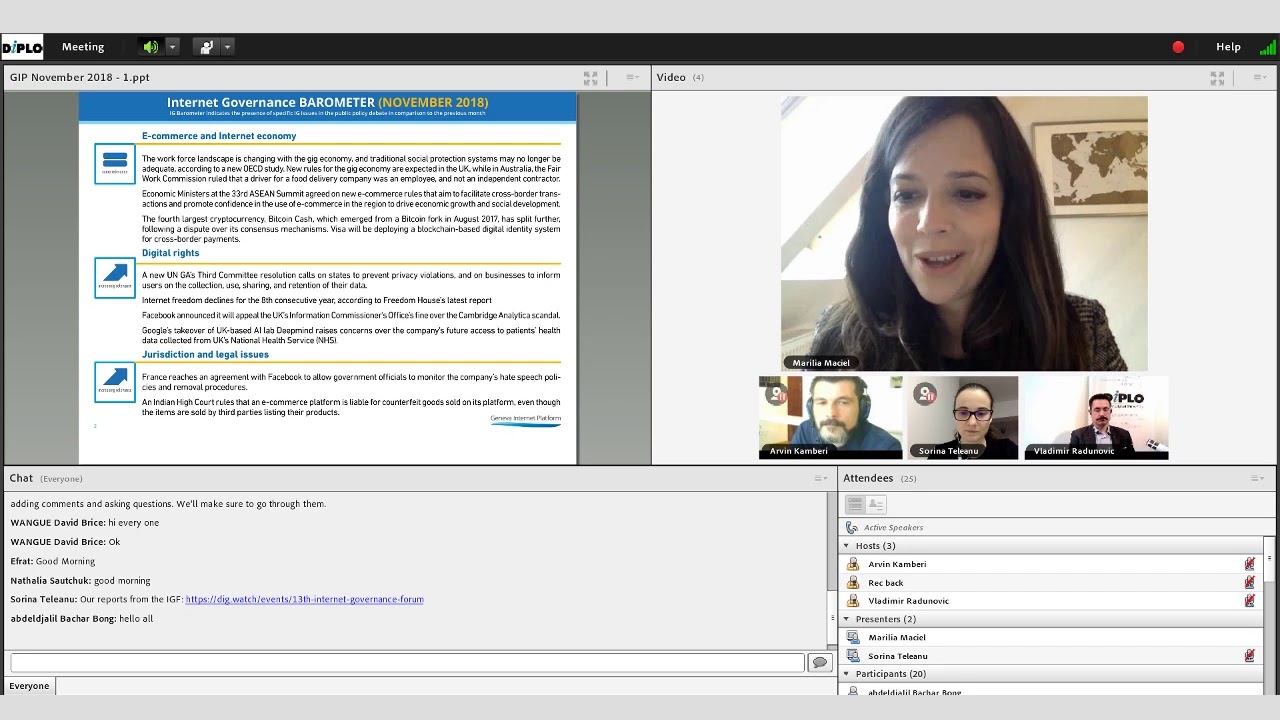 Artificial intelligence and diplomacy: A new tool for diplomats?[Webinar summary] What is the role of civil society and communities towards...
Scroll to top