You are here: Home1 / Webinar digest: Social Media and Diplomacy – the new normal

The use of online social media as a tool to support diplomatic functions is fast becoming the norm. Embassies and Ministries differ only in the extent to which they embrace the new media and mainstream it in their activities. Much has been written in the past three years about this e-diplomacy. In this webinar presentation, viewable again from the graphic link below, we focused on three areas:

The context in February 2013

Digital technologies, social media and global media platforms are quintessential disruptive technology, as powerful as the invention of the printing press. The tension between the world we have known and the one we inhabit is central to any conversation about e-diplomacy. It’s an acute tension. Diplomacy has thousands of years of learning and tradition. yet, if we date the new era from the birth of the PC, which liberated users from the iron control of Computer Specialists in lab-coats we are talking less just over 30 years, and if we start from the new age ushered in by the birth of the web, just over 20 years. Twitter was born in 2006. But this and other most well known social media tools are the tip of an iceberg: they ride on a digital infrastructure and economy, which is expanding at light speed, especially through the explosion in mobile de

vices and the continuous innovation in these convergent tools and services. So the context for diplomacy has changed dramatically alongside the changes in technology. In the presentation we illustrate the sheer speed and scale of these changes through a series of familiarly breathless infographics, illustrating the extraordinary reach of platforms like Twitter and Facebook. However, importantly, we also point out it is estimated that there are close to a billion users of social media in China, a population which rarely figures in mainstream Western analyses of social media.

We suggest that equally fundamental to the new context is what Princeton University’s Anne Marie Slaughter, a former Director of Policy Planning, suggests is the addition to the “Billiard Ball World” of a “Lego World”. The first is “a world in which states are reduced to their heads of state, their foreign ministry, and their army, and they interact with other states almost entirely in terms of power,”. The second is “a world in which states come apart […] and have the ability to network or partner or make an alliance with social actors. […] It is a horizontal world. There are no ladders because there are no hierarchies. It is a web. Power still exists in a web, but it is exercised from the centre, not the top.” It seems to us that there is an essential symbiotic relationship between these two phenomena – the rise and rise of social media and the emergence of a a ‘lego world’. Slaughter herself quotes the recent revolutions in North Africa as classic examples of how power and leadership operate in this ‘networked world’ where the model is ‘connect and orchestrate’ rather than ‘command and control’. The role of social media in those revolutions has been hugely overplayed but they nonetheless played an important role in connecting and mobilising groups of people, and illustrates how power in this context flows from the centre, across a web, rather than from the top. The best connected who is the most influential. It is in this sense that we argue social media and the growth of the networked world feed off each other, symbiotically. 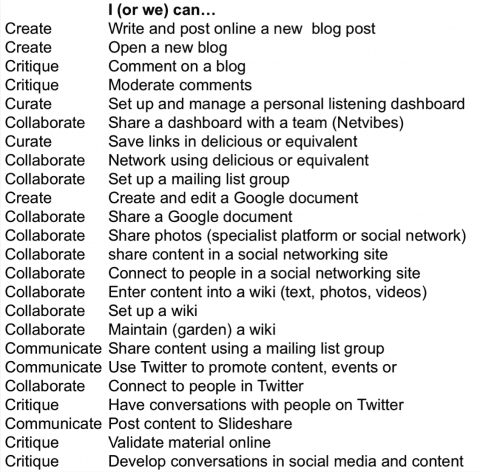 Social media tends to be seen as a set of tools and platforms. We believe a more constructive approach, and one which is more realistic given the rapid rate of change in the popularity and evolution of particular tools, is to focus on a set of basic, transferable, individual competencies in using social media which can equip diplomats to operate confidently and effectively online. The approach is outlined in detail in a series of presentations, available from the Diplo SlideShare account where we describe detailed examples of each of five essential e-competencies:

We provide a sample ‘Social Media Driving Licence’, illustrating what we consider the basic proficiency levels we consider the minimum for ‘digital diplomats’. This clearly raises a series of questions in relation to training and capacity within organisations and individuals:

In the final section of the webinar we consider organisational issues, based on the concept of capability. This is an institutional counterpart to individual competencies. The approach is an old one, used a lot in military planning, which is based on the principle that once battle starts plans may become irrelevant, as the situation will generally develop in directions and at a speed that planners can’t envisage. So planners will consider scenarios, and what capabilities will be necessary to deal with those scenarios. The parallels with diplomacy and social media are evident. We give the example of the fast developing situation in Bahrain in 2011, which we learnt about during a Diplo e-diplomacy training programme. In 2011 diplomats and civil servants quickly found themselves in a situation where global media focused on the ‘latest Arab spring’ and campaigners seasoned in the use of social media lined up in support of the demonstrators. The communication resources and skills of the Ministry were stretched to breaking point, without structures and a pool of trained staff to be able to move quickly and flexibly into those public spaces.

This is an area that we will be exploring in more depth in Diplo during 2013. In the webinar presentation we outline some areas of capability that need to be considered by MFA and embassies, finishing with a series of hard-won principles for success gleaned from a group of pioneers in the use of online tools to support diplomacy, presented at the Geneva e-diplomacy day in 2012.

The slides are available with notes on SlideShare

Diplomacy in the media: the awkward case of Georgia