Conversations on and about social media in general and e-diplomacy in particular are, thankfully, deepening. It’s not surprising that a lot of the commentary to date has been intense and either over enthusiastic or caustically sceptical. Although innovators such as Richard Boly, Stefano Baldi and, indeed, our own Jovan Kurbalija, have been active in using digital technology to support diplomacy for over 10 years, Twitter is not even seven yet there’s still a lot of breathless commentary on the rush to e-diplomatic pole positions:

Sweden’s MFA announces it will be at the cutting edge (although 2013 is possibly a bit late to be opening accounts for all its embassies, something that the Mexican MFA  did a couple of years ago, for example) and the Indian Government begins recruiting social media volunteers, the same idea at the centre of the – better resourced – White House move to spread the word online about the Presidents State of the Union address. Less expected, and more striking is evidence that the US is also using social media to try and communicate directly with Syrian military personnel connected to WMD.

But more and more thoughtful, well- researched pieces are emerging on the issues and impact of social media on international relations and diplomacy. “Uncovering logics of Technology in US public diplomacy is a great example, building a more nuanced analysis that takes the conversation wider than headline-fare. And in case we had forgotten, this piece on the impact of Twitter in conservative areas of the Gulf illustrates both the transformative and disruptive potential of open media. These contrasting images are at the centre of Marc Lynch’s rich second piece on Twitter devolutions, where he also models best practise in blogging, by including a lot of the comments. So it’s interesting to see the critical comment at the bottom of Simon Fraser’s piece introducing the FCO’s Digital Strategy. Should a permanent secretary comment on Tweets, is it the most productive use of his pressured time – and if not, how to counter the accusation of simply using social media to broadcast, the harshest insult in digital circles! To be fair, the FCO is acknowledged as an excellent model in many ways, especially in the open way ideas and evaluations are shared on the DigitalDiplomacy site (although sadly the evaluations are now a bit hidden on the current site). And the strength of UK investment in digital media comes over clearly in this comparison of UK and French profiles online. 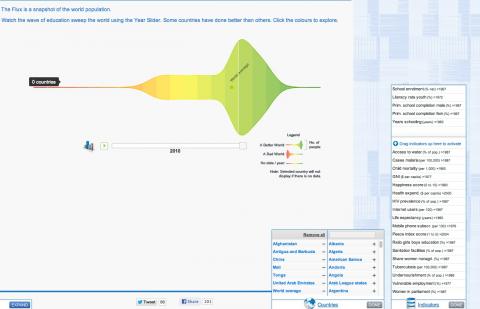 I have a sense, though, that not many MFA are thinking out wide enough, in terms of developments using digital tools. My favourite current example is the potential impact of the increasing trend towards Open Government Data allied with visualisation tools. MFAs have to be in a position to be able to react rapidly and effectively to information suddenly made available on the web. This is a benign example – an app that takes World Bank and other data relating to the UN Development Goals and visualises progress (at last, a potential competitor to the extraordinary skill and power of Gapminder by Hans Rosling). So far so pleasant for a Friday afternoon, but what if data on aid expenditures, mapped to a sub-regional level, is accessible online to all the stakeholders who might be interested in the outcomes? And of course that data is becoming available, via the Aid Transparency Initiative and others, while the Open Government Partnership is building momentum around issues of transparency. Are Ministries and embassies equipped to engage with and map such data, and prepared to deal with media enquires as they pop up in an innocent blog? I think one of the most interesting signposts is the Kenya Open Data portal, a ground-breaking opening up of Government data for others to mix and mash. An ecosystem that exploits this data is growing, as in this lovely example of water point mapping. A useful guide to the range of data that might standardly be available can be seen in the FCO Open Data Strategy. Open Data and Diplomacy is an area Diplo will be exploring in 2013.

Kairos and the precautionary principle – 210A Winning Story
Scroll to top