You are here: Home1 / [WebDebate #15 summary] Should we take new diplomacies seriously?

DiploFoundation’s September WebDebate asked whether we should take new diplomacies seriously. As moderator Dr Katharina Höne noted, with the term ‘new diplomacy’ gaining traction, it is important to debate and raise critical questions about it and its various forms. Sceptics often observe that new diplomacy simply marks the latest fashion trend in diplomatic practice, without being of much substance.

In a recent blog post, Stop Inventing “New Diplomacies”, Mr Shaun Riordan, Senior Fellow at the Clingendael Institute, argued that we must end the obsession with creating new ‘types’ of diplomacy. His blog post sparked some debate, which is where DiploFoundation picked up. Riordan joined Dr Jovan Kurbalija, founding director of DiploFoundation and the head of Geneva Internet Platform, to exchange views on the so-called new diplomacies.

Kurbalija said that there are a number of new diplomacies, which are named as diplomacy without proper consideration. He also pointed to terminology confusion – not even the actors inside the same state use the same term to signify the same thing, which raises the practical question of how countries are going to address and promote their policy effectively. He argued that we cannot stop the use of these prefixes and descriptors of diplomacy, but we can make sure that when these terms are used, at least in policy and academic debates, their meaning is clear.

Kurbalija noted that Diplo has been following the use of prefixes to describe particular types of diplomacy – cyber, e, net, online – since the World Summits on the Information Society (WSIS) in the early 2000s. At first, these prefixes were interchangeable. Over the last 3-4 years, though, a slight segregation in usage has become noticeable – the term cyber is used for security issues, e has completely disappeared because it is no longer pushed by the EU’s Lisbon Agenda, and the prefix digital is moving into the field in its place, the latter signifying commercial and other issues, while the prefix online tends to be used around human rights. Prefixes e, net, and virtual are gradually disappearing.

The field of Internet governance differs from areas of diplomacy both in modus operandus and subject matter. This field introduces the participation of civil society, the technical community, and an interesting interplay between decision-making where diplomats represent their governments and decision-shaping bodies which create prepared decisions. One fundamental difference between Internet governance and other fields is that Internet governance created its own non-governmental governance in the 1990s, which governments tried to join during WSIS. Since governments were trying to enter a fully functional field run by the technical community, the dynamics between stakeholders were different. As such, Internet governance is an excellent example of new diplomacy. However, the problem of how to extend the diplomatic space to other actors is something Internet governance shares with other fields. Kurbalija predicted that the space for global consultations taking the form of new diplomacy would unfortunately shrink in the forthcoming period as we move to the very traditional geostrategy of security and diplomacy, with a focus on the UN Security Council and hard security dilemmas.

Clarity matters, concluded Kurbalija, but the question of clarity doesn’t go against the complexity of thinking and seeing things in shades of grey. The main objective of diplomacy is to promote national interests and preserve world peace, an objective we should always come back to.  Kurbalija encouraged different uses of diplomacies, since we need to revitalise the significance of diplomacy in the global public perception. He also noted that we need to introduce greater clarity of usage of these terms in academic and policy circles.

Riordan began by pointing out that new diplomacies are being invented with triviality, without taking the term or the concept of diplomacy seriously. This creates a lot of confusion between agency, process, and subject matter. What is concerning, he argued, is that diplomacy and diplomatic studies are becoming ever more emptied of meaning. Debates are moving further and further away from the concerns of ‘real’ diplomats and their daily work and field of activity.

One solution, advocated by some observers, is to define diplomacy as what is done by government diplomats; in other words, if your actions are covered by the Vienna Conventions on Diplomatic Relations (VCDR), you are a diplomat. However, Riordan considered this too narrow a definition, one which doesn’t reflect reality. Having criteria of what it is to be a diplomat and what it means to practice diplomacy would give us guidance on whether all these new activities really are diplomacy. However, simply listing what diplomats do is not a good enough definition. Many people, in both professional and private capacities, negotiate, lobby, and carry out political analysis, but they aren’t diplomats and wouldn’t want to be called diplomats. Similarly, not all diplomats do everything that the VCDR lists. Riordan argued that it is quite useful to list the functions of diplomacy and what diplomats do because it reminds us of the continuity as well as the changes of the practice.

However, the solution to the dilemma of ‘too many diplomacies’ that Riordan proposed lies somewhere else. He suggested distinguishing diplomats by their particularly diplomatic mindset. Once you become a diplomat, you become socialised into a diplomatic way of life. Diplomats have a particular way of being in the world. They see the world in shades of grey. They are satisfiers and not maximisers as they tend to look for an acceptable solution rather than an ideal one. They are extremely good at putting themselves in the shoes of others. Riordan argued that this idea that diplomats see the world in a certain way and deal with it in a certain way, might help us get a handle on what might be the definition of diplomacy. If a non-diplomatic, non-governmental actor is acting and ‘seeing’ the world in a diplomatic way, then they should be called a diplomat.

Andrijana Gavrilovic works as an junior associate at Diplofoundation and focuses her work on the diplomacy issues. She is a student of International Relations at the University of Political Science in Belgrade, Serbia

What can diplomacy learn from primates? [Podcast interview with Prof. Frans de Waal] 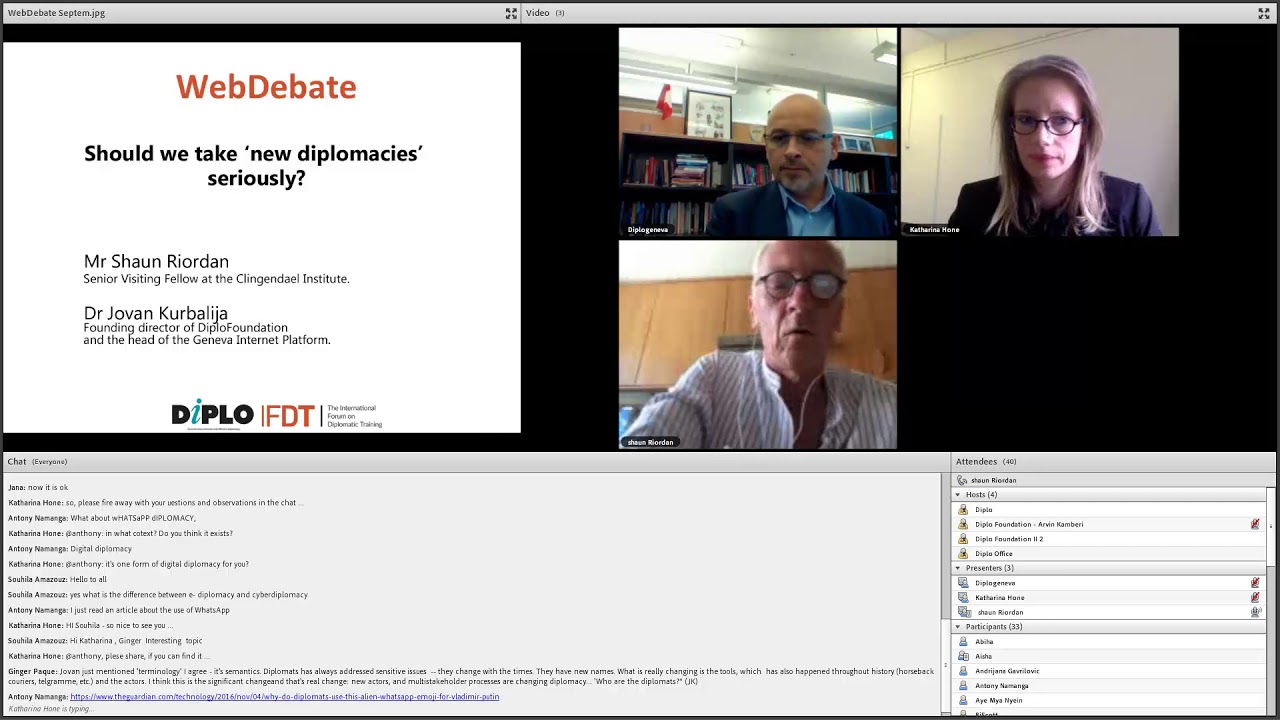 New Partnership with Argentina for Diplomatic TrainingNegotiating with robots: Future or fiction?
Scroll to top