You are here: Home1 / [WebDebate #23 summary] #Cybermediation: New skills and tools for medi...

In our July WebDebate, we looked at what new skills are needed for mediators to operate in a conflict environment impacted by the spread of new technologies, what new tools have become available in this context, and how mediators can concretely benefit from these skills and tools. Joining us were Mr Nickolay Mladenov (UN Secretary-General’s Special Coordinator for the Middle East Peace Process); Prof. Jovan Kurbalija (Director of DiploFoundation and Head of the Geneva Internet Platform); and Mr Enrico Formica (Senior Mediation Officer, Policy and Mediation Division, Department of Political Affairs, United Nations Office at Geneva). The debate was moderated by Dr Katharina Höne  (Research Associate in Diplomacy and Global Governance, DiploFoundation).

Formica briefly introduced the #CyberMediation Initiative, which was launched by the UN Department of Political Affairs, DiploFoundation, the Geneva Internet Platform (GIP), Centre for Humanitarian Dialogue, swisspeace, and researchers from Harvard University. The idea behind the initiative is to explore the impact of digital technology on the field of mediation, as the environment in which mediators are now working in is a digital environment in which social media and other tools play a fundamental role. The initiative will try to collect information from mediators and practitioners who are already using tools, reach out to technology companies to see what new tools could be used in the field of mediation, and try to bridge the world of mediation and the world of private technology companies. The initiative is also working with graduate students in Geneva who are helping to identify tools to better reach the youth and advance the peace and security agenda.

A new context for mediation efforts

Mladenov stated that many mediators have not yet discovered the opportunities of new technologies, so their use has not been harmonised among practitioners. However, he also stressed that while the use of new technologies was a luxury five years ago, today their use is an absolute necessity. Mediators and diplomats representing the UN are aware of what is happening on social media and use social media to further the UN’s mission.

Information today is instantaneous. On the one hand, that makes mediators and diplomats much more informed, but on the other hand, it makes the negotiation environment more difficult to control and creates the expectation that diplomats react quickly to events as they develop. Mediators and representatives of the Secretary-General are present and engaged on social media, engaged with their counterparts, and focused on public outreach. Now, it is much harder for information to remain confidential.

However, sifting through the information available is very important so that mediators and diplomats avoid both fake news and misinformation affecting their work. The amount of information available today makes it extremely important for diplomats to be very clear about their narrative when engaging in negotiation. In this context, Mladenov stressed that it is extremely important that diplomats create a narrative, control it, and remain consistent about it across all platforms and in all discussions. He also underlined the importance of pictures in shaping the narrative. In Mladenov’s view, the use of social media and tools in mediation depends on the mediator’s personal style – some do it personally, while others delegate it to their teams.

The use of new tools in practice

The increased use of networking and communication tools such as WhatsApp, Signal and Telegram, allows mediators to communicate directly, helping them strike agreements quickly and easily while also disseminating information. However, Mladenov cautions there are two main drawbacks to this kind of communication. First, it is not formalised and hence, mediators should always work towards a more formal, written record of their agreement. Second, the teams supporting the mediators and negotiators might not be aware of all the details of the information exchanged, and therefore they might struggle to provide their expert advice. This can be mitigated by tools and collaborative platforms which enable the sharing of information in the work environment.

Kurbalija stated that the policy context for mediation sometimes needs to be secret, sometimes translucent, and sometimes transparent. These three approaches shape the possibilities for the use of cybermediation tools. Mediators have to keep in mind the specific political, social, cultural, technological context in which mediation takes place. In situ face-to-face mediation leaves limited possibilities for the use of cyber tools; teleconferences contain interested parties who are keen and actively engaged in the process. Mediators must engage with the general public in order to create a cultural peace, and possibilities for mediated arrangements to be accepted by society. Cybermediation can be used for communication, collaboration, information management, network management, and learning.

The tools that can be used in cybermediation range from very simple but powerful ones (e.g. Twitter, Facebook, Instagram, group drafting) to more advanced, upcoming ones (Big Data, Artificial Intelligence, Blockchain). Kurbalija underlined that a very delicate balance should be established between making more efficient use of the current generation’s simple digital tools, while also following the newest technological developments. He recommended the Gartner Curve for following new technologies, but cautioned that some of the tools mapped there may not be ready for general use, much less for use in the sensitive fields of cybermediation. Nevertheless, these tools may impact the future of the field. Kurbalija concluded that the toolbox of a mediator should contain the simplest of the tools and the most advanced.

The tension between social media and the need for confidentiality

In Mladenov’s view, there is a very clear line between the need for transparency and needs to preserve certain confidentiality of channels. For the foreseeable future, negotiations will still require confidentiality. However, confidentiality can hamper later the implementation of the agreement, especially if societal buy-in is important. Therefore, finding the right way to frame and communicate the outcomes of the mediation is as important as the details of the agreement itself.

Kurbalija underlined that the use of tools is determined by the purpose of diplomacy – resolving peaceful conflicts. If the tools have the potential to hurt the main purpose, they should not be used. In Kurbalija’s view, public communication tools should not be used in delicate negotiations.

Do mediators and counterparts receive dedicated training on how to deal with social media?

In Mladenov’s experience, dedicated training has become more common of late. For example, the UN has started training its press employees in the use of social media. Ultimately, that needs to expand to the principals of using new technology in the mediations themselves.

Kurbalija presented a ‘one day, one month, one year’ formula. One day is needed to grasp the basic social media tools. Current training is often based on this. However, it takes about one month before effective listening on social media takes place. Usually after one year, a mediator can become an effective social media actor.

Institutional policies on the use of social media

Kurbalija gave the example of the Foreign and Commonwealth Office which combines the assumption of competence and the existence of a crisis management team. This approach is effective because it does not try to codify something that is very fluid while keeping some general guidelines in place and helping people internalise the social media culture of the organisation.

Fornica concluded the debate by pointing out that social media is already impacting mediation, which is why serious reflections on mediation and training in mediation are needed.  Frontier technologies will be impacting mediation in the future, and attention should be given to those as well. Mediators operate in a very technical environment which is also context specific. Every mediator chooses his own tools and style of mediation, but every mediator should also have a good overview of the available tools, including the digital ones,  before choosing.

See recordings of our previous WebDebates 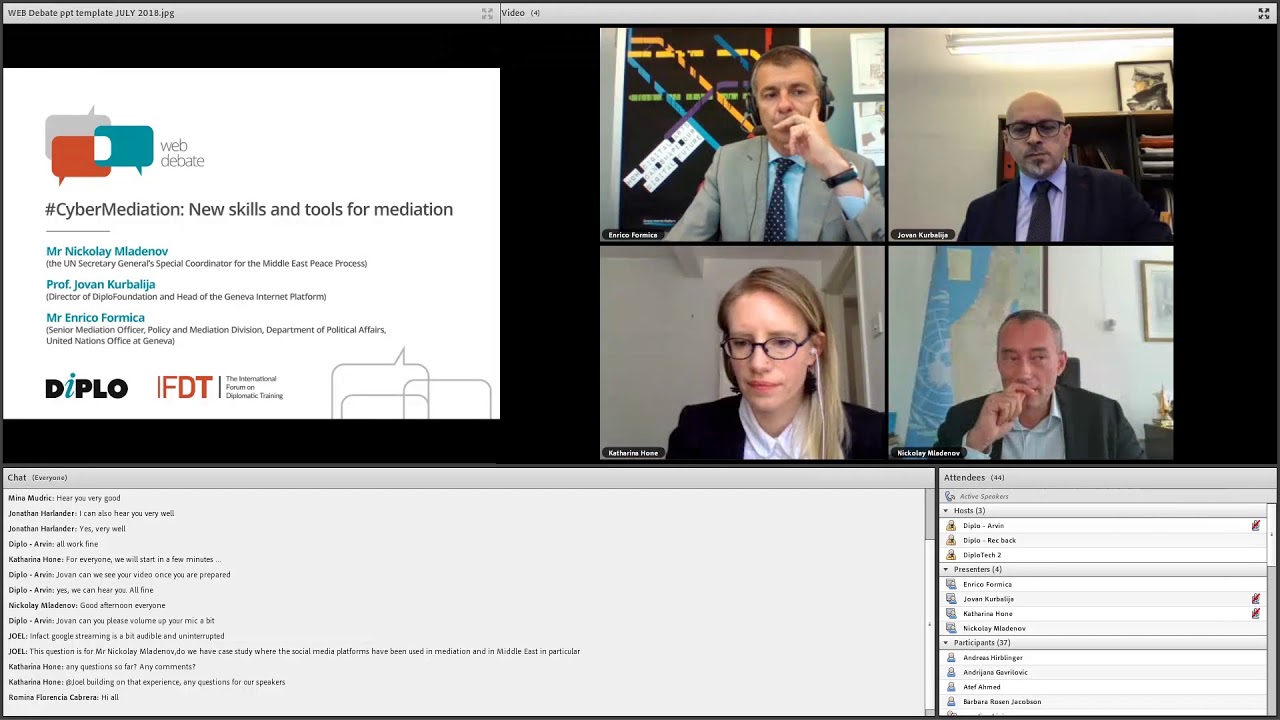 Mid-year review of digital policy: When technology meets humanityDiplomats and ‘immunity’ from the sending state
Scroll to top