You are here: Home1 / Metaphors and Images: Illustrating Climate Change

Pictures and illustrations are an excellent tool to illustrate complexities because they allow us to incorporate metaphors and analogies more intuitively. And metaphors and analogies are, ultimately, what we use to make sense of the abstract and the complex. It’s a challenge to illustrate the complexities of climate change; it’s a challenge one must confront when teaching and advocating on climate change.

I am a fan of Lakoff and Johnson’s Metaphors we live by.  They argue that human thought processes are largely metaphorical. Unsurprisingly, once you start looking for metaphors you will see them almost everywhere. But the key is to stress that these are not figures of speech but the very conceptual tools we use, and indeed have to use, to make sense of the world. In the following, I want to explore and question the metaphors we used to make sense of climate change.

In 2008, Diplo started to wonder how we could illustrate the complexities of the global climate change regime with all its implications and interconnections. A first decision was made to conceptualise the climate regime as a building under construction. Every global climate change negotiation and especially the yearly conferences of the parties can be seen as places where this building is being established stone by stone. Moreover, utilising the metaphor of the building implies a functional and structural connection between various elements. It characterises the endeavour as a process with some continuity and goal. Climate change adaptation and mitigation are the two main joists of the building.  Moreover, we decided to devote each floor of the building to one particular area. Scientific knowledge, such as the reports produced by the Intergovernmental Panel on Climate Change where chosen as the foundation. We also included law and governance, society and economy as floors of the climate building. Every floor is characterised by its own dynamics and key topics. However, we also recognised the connection between floors as illustrated using the example of agriculture at the right hand side of the building. 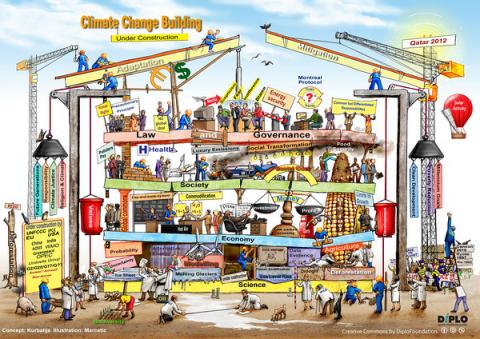 On both sides of the building values and moral principles such as the right of future generations, climate justice as well as poverty reduction and the Millennium Development Goals serve as the stabilising weights of the construction process. Here again, we used a metaphor and translated it into visual language.

But going back to metaphor theory, it is also clear that every metaphor illustrates certain aspects while hiding others. While metaphors are an inevitable tool to make sense of the world, it also clear that we need be aware of their implications; we need to be aware of what is hidden. For example, deciding to illustrate the climate change regime as a building emphasises coherence, progress, and stability. Discord, instability, and separation are hidden. Similarly, we could question the choice of making science the fundament of the building.

Other typical metaphors for climate change are the frog in a boiling pot or the building on fire. Again, each of these is highlighting certain aspects while hiding others. When teaching and advocating on climate change, this is something we need be acutely aware of.

Outing myself as a pessimist? Response to a report on “Advancing Climate Negotiations”

COP18: Negotiating Climate Change. Where are the women?

135 – The power of small thingsWhen do negotiations start?
Scroll to top