You are here: Home1 / The Glasgow environment summit: A new paradigm?

A delightfully innovative 150-second video is viral in the social media; a friendly dinosaur barges into the UNGA Assembly Chamber. This dinosaur asks the podium guard: ‘You OK?’, and when he mumbles a terrified response, this creature from the past adjusts the microphone and says: ‘Listen up! I know a thing or two about extinction…Let me tell you…going extinct is a baadd thing…’. The dinosaur goes on to conclude: We were wiped out by a giant meteor; but you are doing this to yourselves! 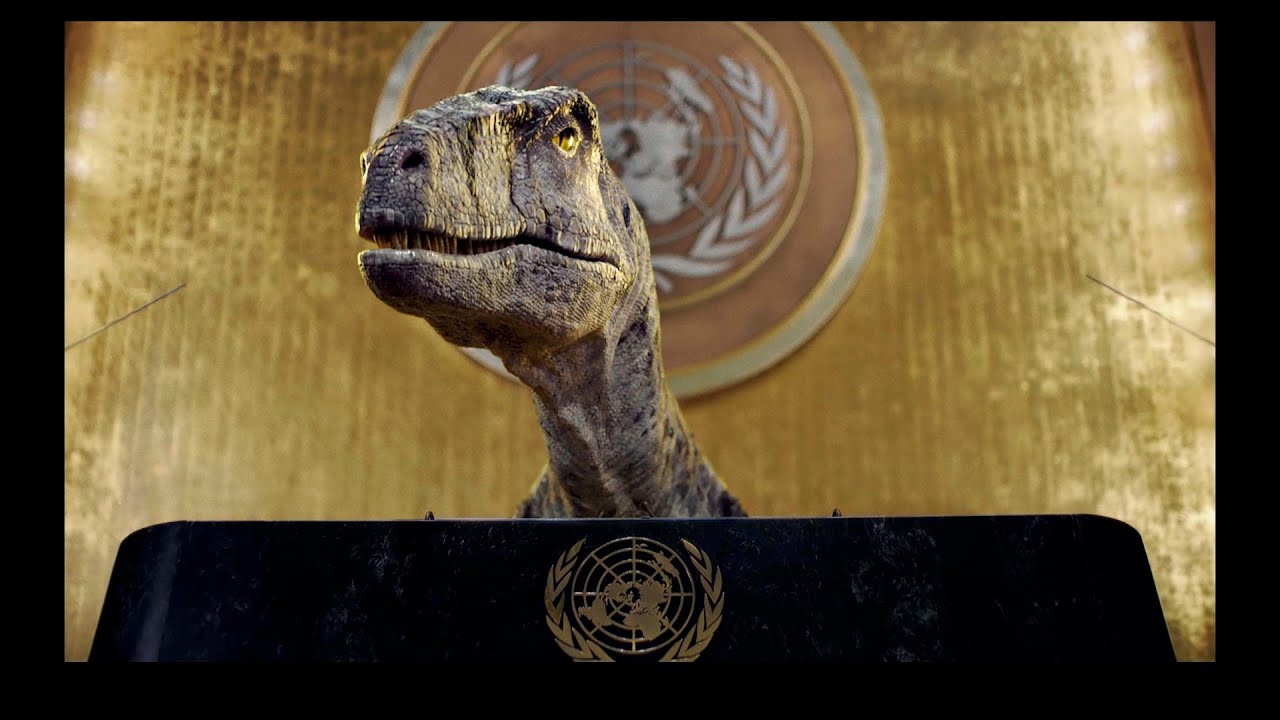 The second image in the mind’s eye is of Greta Thunberg, who with a smile, mocks with eloquent simplicity our current actions on climate change mitigation, as just: ‘…blah…blah…’.

These are simple, powerful messages: Earth’s environmental is already in the ICU, and is all set to go on life support. Business as usual is, plainly speaking, baadd. It defies elementary good sense.

The global community’s eminent environmental experts will surely lock horns this week in Glasgow, UK, those on official delegations pushing their country narratives. With arcane arguments, in which only they and their ilk might understand, they will sprout jargon, crunch numbers, and produce alternate ‘scenarios’. And the diplomats of the national delegations will surely come up with more elegant reasoning, sophisticated arguments. But the real challenge is going to be: who might have the will to bite the bullet, and push their own countries into perhaps the harshest political decision they might ever confront in their lives.

What’s this? The universal goal is: NET ZERO – the date by which each country must commit itself to no more additional carbon emissions that will enter the Earth’s atmosphere, after deducting the carbon burden that will be somehow absorbed, or mitigated, or neutralized. That will impact our lives and cost in terms of reduced development.

In world totals of carbon emissions, India lies 4th, with China, the US, the EU, and Russia among the top 5. (China is responsible for more emissions than the next three: the US, EU, and India). In per capita figures, India is by far the lowest among them. But India’s figures will mushroom as the country moves beyond its low middle-income status, which is inevitable. That’s why some see India’s success in curbing carbon as key. But is the world ready to really help India? 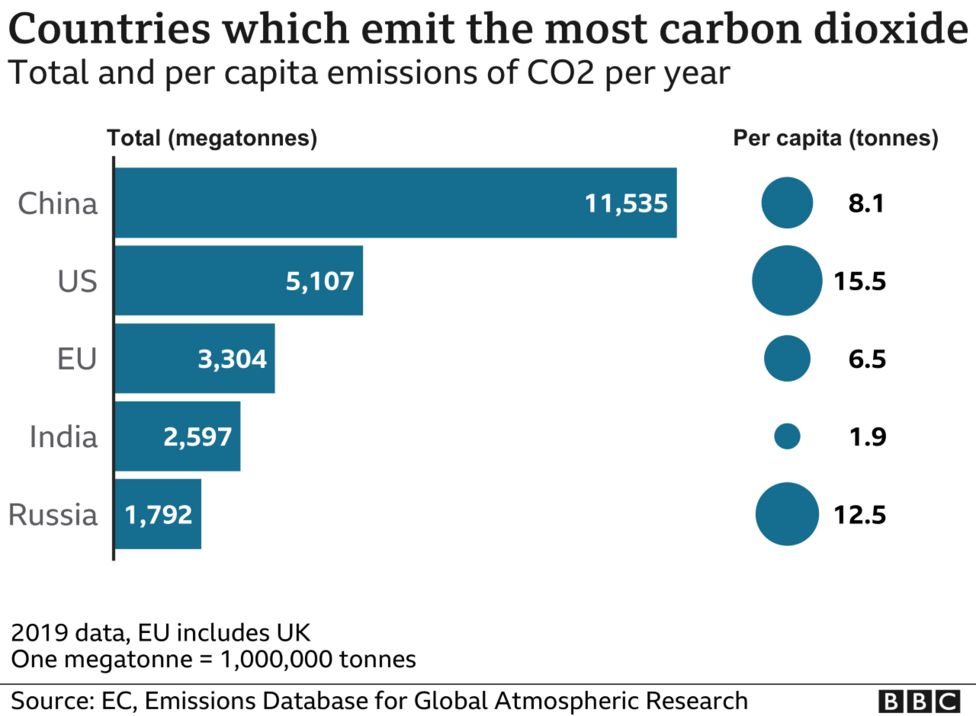 India resisted setting out its Net Zero Year, but at COP-26, PM Modi has just set 2070 as India’s target date. That is a major development. Against this, a fair number from the West have signed up to the target year goals set by earlier COP Summits, 2050. A few have been braver, more ambitious. The simple question for India: is it likely to end up in a ‘spoiler’ role? That is seen by some foreign observers as a hallmark in the past, on some global issues, notably at the WTO. India was also, in the past, been labelled as an ‘outlier’. That makes the Net Zero date important. Can India squeeze that date down further?

More than 30 years back, India and others of the developing world produced the doctrine of ‘common but differentiated responsibility’. That line of argument is entirely logical, and it is now an accepted vital feature of the global environment policy. Those that are responsible for most of environmental degradation, plus massive pollution, over long periods of time when we were all grossly negligent of the environmental impact of the industrial revolution, mining and deforestation activities, must also bear the greatest share of the burden of dealing with the consequences of polluting our shared Earth. That position was naturally supported by the global South, though with varying degrees of passion. Some were content to speak the minimum, and avoid giving offence to powerful, rich states, on whom they depended for foreign aid or had other obligations.

India resisted setting an overall reduction in carbon emissions. Instead it had set an ‘emissions-intensity’ target, promising a 33% to 35% reduction between 2005 and 2030. That is a relative reduction, not an absolute goal, because even if ‘intensity’ is down, the sheer numbers for a growing, developing country must produce a rise in the absolute figure of carbon emissions. As for renewable energy, at COP26, PM Modi has promised to get 50% of energy from renewables by 2030. Of course, the COVID-19 pandemic has been the major culprit in setting back targets the world over. Can India set a date to stop building coal-fired power plants?

Let’s look at China’s goals. China is the world’s largest CO2 emitter, responsible for a quarter of the global total. Its emissions are to peak in 2030, and by then, 25% of energy will be from non-fossils. It has set 2060 as its Net Zero date. China has promised to stop building coal-fired power stations overseas; but not at home. China has also saddled Pakistan with coal plants, beyond its anticipated needs, and a debt that will be difficult to repay. And China is to construct 47 major new thermal power plants under its current 5-Year Plan. What does that say for its Carbon goals?

The notion of equity remains vital for India, even in the face of resistance from the Western countries, led by the US, that are clearly the principal culprits for historical pollution and environmental degradation. The commitments that all these rich states had made to the global community, in the past 30 and more years, have simply not been translated into action. Nor has the environment technology sharing promised by these states, taken place. We, as Global South countries, plus the environment activists and NGOs, keep singing the same song, but with diminishing impact. Now they simply don’t listen.

What then does this dire, hopeless situation mean for small, highly vulnerable countries that are on the frontline of this existential environment disaster? Think of the small island developing states (i.e., members of the small island states, the SIDS Forum)? Whether it is the Maldives, the Seychelles, or the small island countries of the South Pacific, the relentless rise in sea levels means that they will have to abandon their home-habitat within the next 10 or 15 years, and some even sooner. That is now inevitable, in spite of anything that we might be able to do right now, because of the inexorable process underway. No mitigating actions are possible.

Beyond those island states, many others around the world, including India, will also face devastating coastal inundation, when sea levels rise by 1 and 2 meters or more. That means that the major cities on the coast, starting in India with Chennai, Kolkata and Mumbai, and a host of other coastal cities, towns and villages, will face devastation, including abandonment of some of their most valuable seafront properties. Similar damage will occur along the entire 5000 km coastline of India. And what will happen to a low-lying and densely populated country like Bangladesh? These issues boggle the imagination.

What are India’s challenges?

First, at the COP-26 conference, India cannot afford to be isolated, or even worse, become an outlier. That’s mainly tackled in the new goals announced on 1 November at COP26. But it will be hard to build coalitions with fellow developing countries. How does India build on a congruence of interests? It shares some interests in common with China, and has to find a way to handle this at a time when that bilateral relationship with Beijing is so fraught.

Second, arguments about equity and justice, and primary responsibility for the global environmental damage, all these will only go so far. Even other developing countries now seem to have diminishing patience with these viewpoints despite the facts and the sound reasoning. How does India tackle this?

Third, as in many other situations, India is ‘a world of its own’. For example, on a per capita basis, India’s contribution to carbon emissions has risen in the past 20 years, and stands at 1.9 tons per person, but that is a great deal less than the per capita responsibility or the Western world. And China is at 8.1 tons per capita; the US is at 15.5.

As India’s incomes rise, this per capita share will inevitably rise; that becomes a global problem because of the country’s population size. India cannot stop development and progress, but must find far greater efficiencies in energy utilization. And coal lies at the heart of this problem. It must turn to renewable energy, solar and wind especially, with far greater vigor. Can it obtain help for the required innovation and technology shift? How can developing countries make that argument resonate?

Fourth, with fellow developing countries, India has to be agile and work in a constructive fashion. India may now finally get to see how well the actions by it’s Ministry of External Affairs in creating a ‘Development Partnership Administration’ in 2013 has worked. It simply must to begin a much larger, more ambitious program of technical assistance for developing states. That is India’s ace card. India cannot match China’s deep pockets for financial aid or for infrastructure projects, but it is a world-beater in technical assistance. This is an under-utilized asset.

Finally, on the global canvas, it is very possible that at Glasgow a breakdown, or a splintering of the G-77 group of developing countries may take place. There are some that feel that ‘solidarity’ of the global South has increasingly become hollow, overtaken by differentials in our levels of development. Perhaps the Global South now confronts an entirely new paradigm. This means that the lines of division are now very different, compared with the things taken for granted for so long.

Consider the larger picture. The harsh reality is that the advanced countries of the world, with their high standards of living, are envied by the Global South. Hundreds of thousands of people each year set out on hazardous journeys, at the cost of destroying the very fabric of their family lives, to somehow smuggle themselves to these imagined Western destinations that are seen as lands of milk and honey. Everyone involved in that process, from the human traffickers to the countries that enforce muscular border controls, evidently discard their sense of humanity. The driver of migration is a sense of hopelessness in one’s own environment and future prospects there. Migration is a product of a lack of economic growth. Migration will be accentuated by climate change.

Thus, we really need effective foreign aid to stabilize the economies of poor countries and to better root their populations in their own homelands, to stabilize them in their homelands. But against this, the notion that major investments should be made for effective development in the Global South seems like a pipe-dream. Foreign aid has mostly been such a gross failure. We need new, innovative thinking.

In the decade ahead, likely global challenges will include the environment and climate change, technology, human development, and especially, migration. These are interconnected issues. Different segments of the global community see them from self-centered perspectives. And yet, for humanity as a whole, our future, even our existence, is shared journey, interconnected as never before.

These then are the interconnected global challenges, each of which also has links with climate change. The challenge goes beyond the degradation of the environment, to our ways of life and the paradigm of economic growth and societal stability in the Global South.

We are all in Lifeboat Earth, Gaia; the rich are on the deck, holding the high points, and perhaps have better vantage; the poor are huddled in the well of the boat, crowded and shivering. But it’s the same lifeboat.

Visit Diplo’s Climate Diplomacy page to find out more about this topic.

Some thoughts on the Rio+20 Environmental Summit

MoU between Switzerland, Malta, and Mexico in the field of online diplomatic...
Scroll to top