You are here: Home1 / The medium is really a message – from typewriter to computer

The medium is really a message – from typewriter to computer

This blog was inspired by lively debate during the February advanced diplomatic webinar on the evolution of technology and diplomacy. We discussed the impact of technology on the way we think and formulate ideas. In the latest evolution from typewriters to computers, we gained flexibility in editing text and lost the discipline of formulating ideas into text.

This blog requires one glossary explanation for those who are younger than 30. A few decades ago (back in ancient times, in Internet terms), there were typewriters, machines which could be described as keyboards connected to printers. Whatever was typed was immediately printed, without being visible on a screen first. A strange device indeed! Further back in history they were mechanical; later on they became electric, which made our fingers less muscular.

Typewriters were operated by typists, a profession that did the most for female emancipation in Europe at the beginning of the twentieth century. In big administrative centres, such as Geneva, there were legions of female typists, which tilted the gender balance to the great pleasure of the minority males.

Typists were extremely powerful in every institution. Those who were in their black books had serious career limitations. Between your genial handwritten idea and a nice report for your bos 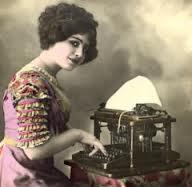 s sat Her Highness, the typist. They had an unbeatable arsenal of excuses to delay their work. They rarely bent significantly to power from above. From my early days in diplomacy, I still recall that handling relations with the typist was one of the most difficult tasks for junior diplomats. If you passed the typist’s test of persuasion, you could persuade anyone to do pretty much anything. (Caveat: I was fortunate to know how to type fast, a most important skill in my early days in diplomacy.)

But why does this matter? Well, you had to think a lot before you submitted your handwriting for final typing. While the typist would tolerate a few mistakes in the first version (it was possible to correct them with a special ink), you’d better not come back with additional corrections. Bringing the text back for the fourth or fifth time for correction was unthinkable, even for the most courageous.

Yet this forced us to think carefully and choose the most appropriate words and formulation for our draft. The Internet lets us keep things open as long as we need. It helps us to become even bigger procrastinators, beyond what is natural. Making choices is an important part of creativity. Ultimately, by closing one thought, sentence, page, or book, we are creating something new.

In this way computers have not just helped us to do what we do anyway in an easier and simpler way. They have changed the way we think and how we create. This is a substantive change. With high flexibility in editing text, the pendulum has moved in another direction. Flexibility, a fresh breeze in times of rigidity, has become a problem. Are we going to lose something in our creative apparatus?

More than 2000 years ago Plato reflected on the similar dilemma brought by writing – a new technology at the time. In ‘Phedus’,  through Socratic dialogue, Plato marshaled arguments for and against writing……people did lose when writing was invented; they did not need good memory any more….. and it was not only about recalling information but also creativity and wisdom.

Are the modern changes in the way we formulate ideas as inevitable as the influence of writing has been in our evolution? What new skills are we likely to develop? Let me bring this text to ‘my typist’, before I slide into procrastination.

Threats to e-nternational peace and security of mind“Orphan” news…?
Scroll to top