Hot and humid Balinese weather greeted the Diplo team as they touched down for the start of the 2013 Internet Governance Forum. The convention centre which will host the proceedings is in a somewhat isolated resort but perhaps that’s a good thing … fewer distractions. 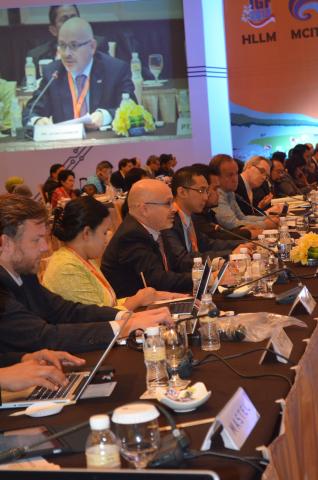 What has become a tradition at IGFs, and known in music festivals as Day 0, brought the expected high-level session organised by the host country. The Indonesian government introduced a new twist by inviting other stakeholders to address the meeting which included representatives from the business community, the technical community, and civil society (though civil society was the last one to address the session).

Typical seating for this kind of session would usually feature an elevated panel, yet the hosts opted for a level layout (with approx. 100 people sitting at a roundtable and another 200 to 300 in classroom seating alongside). This lent the proceedings a more intimate feeling, with no obvious division between the speakers and the audience.

The agenda formally announced a focus on cyberethics and responsibility and started with ‘gloved’ diplomatic speeches. The USA put freedom of expression and security at the forefront (both now on equal level it seems) as well as capacity building. Fadi Chehadé, president and CEO of ICANN talked about an Internet for all, not only for one country.  Brazil spoke about the democratisation of Internet governance and the need for a multistakeholder model like the one it has at national level. Google, represented by a female representative from the region (a move welcomed by many) introduced some criticism of the US government. The agenda opened up when Citizens Lab Director Ronald Diebert started with: ‘e- but not for ethics but rather for Edward’ – as in Edward Snowden – even though ‘governments and even some corporates would be uneasy with this’ (and it seems that they were). The audience supported his intervention with light applause.

Diplo’s Jovan Kurbalija clearly noted that the reality is that Internet governance is in crisis, a thought which was quoted throughout the day. Kurbalija explained it as a challenge and an invitation to change (the third of the 3Cs: crisis, challenge, and change). He also announced the Geneva Internet Platform as an attempt to assist developing countries to better participate in global Internet governance processes. An open discussion followed, albeit it with no specific controversies but rather many issues served up on a plate.

After the high-level session (and alongside it) many other sessions took place – capacity building sessions on cybersecurity, multistakeholderism, and the academic GigaNET meeting, being just some examples.

Rumor has it that during the Building Bridges plenary session on Day 1 of the IGF, Brazil might invite participants to comment on its current draft document on the role of the government, a document that was drafted during the WTPF in Geneva in May – and, if the feedback is constructive, some hope that they might even come up with the next draft version by the end of the IGF. Let’s see.

The IGF formally starts tomorrow with an early-morning Orientation session for newcomers (and all), co-organised by Diplo, followed by workshops and a plenary on Building Bridges, with the Opening session closing out the day. Stay tuned as Diplo’s team on the ground navigates the waters and report back to shore.

The EU on Internet governance: Strong on description – Weak on prescription