You are here: Home1 / IG entering the ‘premier league’ of global governance 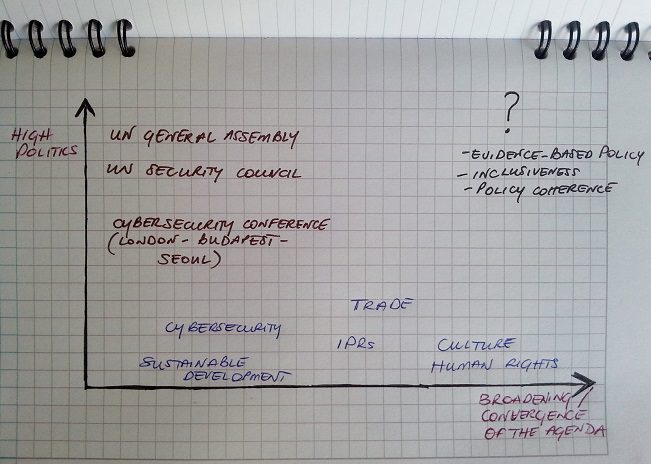 On one hand (on the vertical axis), IG is moving towards ‘high politics’. Over the past few months alone, IG been on internal agendas of the Security Council, the General Assembly, and the Seoul Conference on Cyberspace. IG is entering what Jovan refers to as the premier league of global governance and global diplomacy. This has both good and bad consequences.

On the other hand (on the horizontal axis), we can see a broadening IG agenda that extends to issues being discussed by other players. For example, the WTO Public Forum, held earlier this month in Geneva, dealt with issues that fall under the broad IG umbrella, including data protection, privacy, and e-commerce. The Human Rights Council’s 24th session discussed privacy and surveillance.

It is probably this fact that has driven around 40% of workshop organisers to plan discussions around the institutional framework for IG. And, as Jovan explained, it will undoubtedly be one of the underlying themes of this year’s IGF.

‘It will bring the new challenges to the IGF. The IGF won’t be the only show in town any more. It will be part of a broader scene. And in this context, we have to make efforts to contribute to this process,’ Jovan said this morning.

Towards creating a functional and inclusive new IG geometry

During his speech, Jovan referred to three important elements that could contribute towards making the new IG geometry more functional and inclusive.

The first is to include evidence-based policy-making, an element which is closely related to a new project Jovan announced: the Geneva Internet Platform.

‘We need more evidence on the impact of the policy that we introduce, and the effects of the various activities that we do, in the IGF, in ICANN, at the ITU, and other bodies… I can announce that in Geneva, with the help of the Swiss government and other stakeholders, we are planning to introduce the Geneva Internet Platform as a platform where evidence-based policy-making will be promoted.’

The second is to foster policy coherence, i.e. to avoid duplication of efforts and to preserve policy coherence across the many initiatives, conferences, and events that take place.

The third is to promote inclusiveness. Remote participation can elevate the role of remote participants from that of viewers to that of active and engaged participants. So can other efforts aimed at encouraging more people to take part in IG discussions.

On a different – and very positive – note, the 2013 IGF which started officially today, seems to have established a new record: more than 2,000 participants from 109 countries registered for the forum. Yesterday’s high-level meeting was attended by 500 people from 53 countries.

On behalf of the Diplo team, I join Jovan in wishing everyone a successful IGF, and in joining efforts to come up with new and innovative ideas: ‘The Internet deserves our greatest efforts. The Internet is a great enabler of humanity. Our efforts should be equally great in our attempt to find a suitable way to govern the future of the Internet.’

If you missed the Opening Ceremony, you can watch a recording here:

International inviolability for the root zone?