You are here: Home1 / The History of Wireless Communications in Canada’s Arctic – Part T...

The History of Wireless Communications in Canada’s Arctic – Part Two

Remember, there is no such thing as remote in the Internet world? This is the second blog in the series describing how the communities in Canada’s Arctic have been connected electronically to the rest of the world that they can’t reach by road

In 2005, two commercially-available services launched, linking all Nunavut communities via satellite.  The QINIQ network connected all 25 communities with a large satellite dish that then used wireless connectivity to connect users to the shared satellite dish. NetKaster also launched, installing small dishes directly on customers homes in a number of communities. NetKaster relies on KA Band and so connectivity is often disrupted through inclement weather and can only be used in the southern part of the Arctic.  Lets’s think about that for a sec.  “Inclement weather” in the arctic?  The arctic DEFINES inclement weather – think of it as “the home of the blizzard”.  The Qiniq network, on the other hand, relies on C Band which has proved to be very stable and reliable.

NetKaster is owned by the local telephone monopoly, NorthwesTel.  NorthwesTel has also rolled out DSL in the three largest communities in Nunavut a couple of years later.  I, personally though, find it very interesting that the telephone monopoly did not start supplying these services until the Qiniq network came into being.  In my mind, until there is competition, there is no impetus for a monopoly to improve. 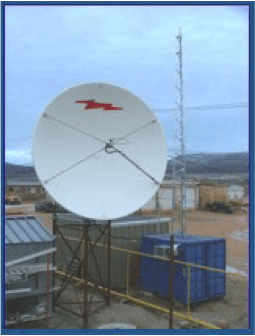 This photo shows a standard Qiniq satellite dish with adjacent wireless antenna.  These are stationed in every one of Nunavut’s 25 communities so that every community has access to broadband.  In fact, NBDC (Nunavut Broadband Development Corporation) refused to roll out the Qiniq network unless they could do so in every community – even in Grise Fiord with a population of 150 people.  Each user purchases a wireless modem to connect to this service.  This also provides for user mobility.  The user can take their modem to any community in Nunavut and instantly access the local wireless system.

The Qiniq system operates through a public-private group of partnerships.  NBDC is a not for profit group tasked with identifying the territory’s broadband needs.  NBDC worked with the Government of Canada, the Government of Nunavut, SSI Micro and many other organizations to put the deal together that saw the birth of QINIQ in 2005.  SSI designed & deployed the network while also providing significant funding to the proj

ect.  The network supports full mesh connectivity, allowing any site to talk to any other site in a single satellite hop.  This is critical for voice and video conferencing technologies.  Dynamic bandwidth allocation is also supported, allowing the network to efficiently allocate bandwidth where it is needed most.  In order to maximize performance and reduce the impact of satellite latency, various technologies are used, including transparent web caches and IP accelerators.

The QINIQ network also utilizes licensed wireless technology to deliver service to both commercial and residential end users. As with the satellite component of this network, the municipal distribution system is quite advanced and boasts several distinguishing features. Firstly, the wireless solution is based on NLOS (Non Line of Sight) technology, meaning that users do not have to be able to see the antenna directly in order to get service. Secondly, the technology is extremely non-invasive, and does not require any external cabling or antennas.

The wireless modems are very easy to use and can be self-installed by users. The QINIQ wireless network also utilizes a licensed frequency, minimizing the possibility of interference, and allowing for a greater broadcast power (improving signal strength and coverage.)

In 2005, when this system was first launched, the Government of Canada only funded this for 2,000 users, forecasting that this would be the maximum of users within nine years of start-up.  Within the first nine months of operation the number of users exceeded this number, causing lags in the system.  In 2009, the Government of Canada and SSI Micro provided additional funding to upgrade the system to support this unanticipated uptake.

The final blog in this series will describe the impact of the technology on people and their lives.

The threat of exposure