You are here: Home1 / The History of Wireless Communications in Canada’s Arctic – Part O...

The History of Wireless Communications in Canada’s Arctic – Part One

We all think the Internet has connected everybody and that there is no longer such a thing as remote–well, I have realized that we are so remote, people don’t even think of us as connected!  Have you ever taken an international flight that took you over the “top of the world”?  All of those vast expanses of either total white or what looks like all rock and lakes?  Welcome to the Arctic! 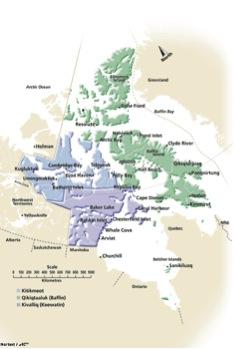 The majority of the communities in Canada’s Arctic are not accessible by road and, therefore, wired infrastructure is not a possibility either.  The exception to this is much of the Yukon Territory and parts of the Northwest Territories.  These areas started receiving copper-wire and telegraph services in the first half of the 1900s.  The “fly-in” communities were still unserved at this time except through radio.

You know, I don’t mind that most of the world doesn’t know where this area is but when most Canadians can’t even point to it on a map, it always makes me wonder!  Maybe its because we in Nunavut don’t have roads.  (Nope, NO ROADS – not any connecting one community to the other or to the rest of Canada.)  With no roads, services can only be provided to these communities by water and air.  Nunavut (which used to be part of the NWT until 1999) is a vast area, comprising 1/5 of Canada’s landmass but with a population of only 30,000, 85% of which are Inuit.  This small population is scattered throughout the territory in 25 communities ranging in size from 150 to 8,000 people.  I live in the big, capital city of Nunavut – population 8,000!

In 1963, Canadian National Telegraphs (CNT) was awarded a U.S. military contract to build a tropospheric scatterwave system for the Distance Early Warning (DEW) line (remember the cold war fear that the Ruskies would invade North America through Canada?).  Through this, residents of two communities – Cambridge Bay and Kugluktuk – were able to make long distance calls over a standard telephone for the first time.

Funny but oh-so-true story here.  On October 6, 2011 starting around 6:30 am EST a “technical anomaly” caused the satellite to point away from the earth causing an outage in Internet, telephone and bank machine connectivity throughout much of Canada’s northern areas. The outage also affected flights in the region. Can you imagine this?  The phones and internet within each community worked but you couldn’t call out of the community, send any e-mails and cell phones crashed.  Also, unless you happened to have cash in your pocket, you couldn’t buy anything – the credit and debit terminals were all down.  Also, remember those international flights flying over us?  Most of their navigation systems had to rely on historical data rather than up to the second information from the satellite.  That was an “interesting” day and really pounded home to everybody how much we all relied on that one satellite and the fact that we don’t have any redundant services to fall back on.

The next blog, Part Two of this series, will focus on the technology used. Part Three will be about the impact of the technology on people and their lives.

Speak up early and loudly

Center to Periphery: differentiating spheres of control in China’s cyberspace