You are here: Home1 / Election as catharsis

The results of the first round in the French presidential elections have been published[1]. A “public intellectual” – Max GALLO, historical fiction writer and Member of the French Academy – has given an interview, in which he comments on the outcome. The title is: “France rears up when facing obstacles”. He then goes on to aver that “since the end of WWI France is in long-term crisis”, which has left it “crumbling”. He goes on to speak of a “French curse” – the country’s refusal “to understand the vital necessity to adapt”. 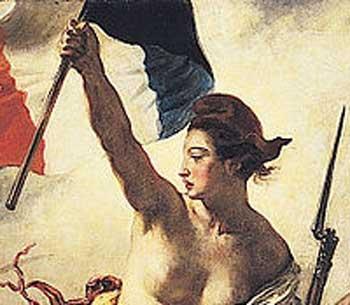 This kind of historicizing analysis of current events (the past as future waiting to happen) is quite popular, for it provides a self-contained, commanding and convincing narrative. Unfortunately it is pure fabulation from available prejudice – “enjoyable fiction” in Nancy MITFORD’s words. Here is why.

The electoral process yields a new balance in power relations between parties. We “intend” our party preference, but as we vote we do not “intend” anyone else’s or the resulting political power balance. It emerges from the process itself: the resulting balance of power is inherently “unintended”. There is no causal relationship between an individual vote and the outcome, though one thing follows the other. Logically the two are separated by the unbridgeable chasm of an “emergent” process.

Why we have decided to entrust our political process to an “emergent” process is a long story, and need not detain us now. The fact remains that there is no causal link between individual positive preference for one party and the ensuing balance of power.

Any narrative that purports to describe the “intent” of the voters hides the fundamental “emergent” process and replaces it by a fiction of an electorate that by aggregation expresses a “will”. To make the narrative hold this fictitious (reified) person – the electorate – is endowed with coherence and rationality. It defies good sense to imagine that millions of multifaceted and contextualized intents can be aggregated (sublimated?) into a coherent, rational and willful whole.

The fiction of historical continuity and coherence

Max GALLO furthermore postulates historical continuity. One needs to exercise suspension of disbelief to assert that the intentions of grandfathers in any meaningful way determine the voting patterns of the (far more numerous) grand- or even great-grandchildren.

We would postulate historical determinism, without indicating how we might get ourselves out of the predicament. Meanwhile social changes like urbanization, literacy, and globalization have taken place – but never mind. One specific (and arbitrarily chosen) experience – WWI – still rules us. I might just as well argue that Napoleon’s wild wars are to blame – or is it Clovis’ conversion? This view postulates that history has a discernible beginning – that a historical event is causa causans. The “chains” of historical causation stretch back into infinite time and emerges from infinite depths as they diffuse throughout society leaving to traceable causal pattern.

In both instances the political process would be unable to change the “flow of history” and GALLO’s “understanding the vital necessity to adapt” would be howling at the moon.

It further stretches the imagination to imagine that voters are somehow bent through their vote on expressing an abstract “vital necessity to adapt” (respectively not to do so). What they chose is a politician (together with confederates) to make choices for them. Chosing a program is already a much more difficult undertaking, for it implies capacity to collapse preferences for specific policies into an overarching “political utility” – to use economic jargon. We may colloquially say: “on balance I like this party program better” – when asked to explain the choice rationally, we would be hard put to do so except by tautology. Isaiah BERLIN e.g. postulated inherent contradiction between freedom and equity. This is the very stuff of party programs…

In the end, this is all rhetoric. Max GALLO argues that France needs to be convinced that she can embrace change in “sovereign fashion”. “This country will adapt to the world only if it accepts to be itself – in the world”. Sounds terrific, but what does it mean? Rhetoric appeals to emotions, not to good sense. Upon closer inspections such phrases vanish into misty or musty incomprehension.

It’s all about personalities

GALLO postulates the need to address the “question nationale” – by which I suspect he means the question of France’s identity. He speaks of the “symbolism of the tricolore” – akin to Americans pledging allegiance to the flag. Here the strains of the Marseillaise.

The rest of the interview, quite tellingly, deals with the failure of President SARKOZY. He is the victim of circumstances, Mr. GALLO argues. First it is the world crisis, which SARKOZY could not possibly have mastered alone; so he is exculpated.

Secondly, he is victim of a twin-headed cabal. He is a transgressor against the “French intellectual elite” – whatever that may be, but presumably urban. At the same time he is a “mixed-blood politician” of suburbia without deep roots in the “France profonde” – the rural areas from which his predecessors have emerged.

Pity poor SARKOZY – how could he possibly win when attacked from so opposite sides? Again, we have here historical determinism. On the one side we have “unchangeable forces”; on the other the “unchangeable personality” of SARKOZY. This makes him a tragic figure (I might disagree here: i-i-chih-i “using barbarians to check barbarians” is shrewd policy since the time of the HAN over 2000 year ago[3]).

One is victim of fate; one is the architect of one’s own destiny – or so we are told to believe. This dichotomy is a figment, and obscures the complexity and flexibility of context. Between the Scylla of historical inevitability and Nietzschean unfettered “will to power” there is a pragmatic middle ground – I’d opine. How to get there in unassailable fashion?

Far from celebrating continuity elections are a “clean break with the past”. Elections are a cathartic – cleansing – process through which the past is consensually consigned to the “dustbin of history”, and politicians are invited to tackle the present afresh, with a new balance of power. Elections also set a clear base-line from which to judge politicians. One praises or damns politicians for anything that happens “on his watch”. This watch begins on Election Day.

Elections are in a sense “feasts of forgetting”, as they were celebrated among Amerindians[5]. The politician of the past legislation is the sacrificial lamb who, like Jacob in the Bible, is either sacrificed, or resurrected and gifted a Covenant with the people. It is the very chasm between individual intent and political outcome that absolves us from responsibility for the future at the same time as it leaves no controversy about who is to lead for the next few years.

What are we to make of GALLO’s ramble? The infinite set of possible policies has to be whittled down to the “politically feasible” by excluding most “wild” ideas. At the end only a few will be left standing – the pragmatic middle ground I spoke of before, and where consequentialism can guide us.

GALLO’s outburst is a way to gain influence in this “whittling down” process. That’s his ambition. Will he succeed? Who knows? Michael ENDE describes life as “an enormous, utterly empty building, in which any loudly spoken word triggers an utter never ending echo.”[6].

The likely outcome of the electoral process? My wild conjecture. HOLLANDE will become President of France. The ensuing legislative elections will confirm a majority for SARKOZY’s center right UMP party. On TV Alain JUPPÉ is already jockeying to become Prime Minister. Marina LE PEN will succeed is evicting SARKOZY, but will fail in destroying UMP.

[3] See: Ying-Shih YÜ (1967): Trade and expansion in Han China. A study in the structure of Sino-Barbarian economic relations. University of California Press, Berkeley.

[4] Catharsis or katharsis (κάθαρσις) is a Greek word meaning “cleansing” or “purging”. It is derived from the verb καθαίρειν, kathairein, “to purify, purge,” and it is related to the adjectiveκαθαρός, katharos, “pure or clean.”

It’s a big week for ISOC

Congratulations to all IGers on the Renewed MAG
Scroll to top